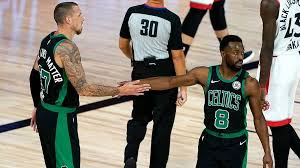 The first 5:12 of Sunday’s series opener between the Celtics and Raptors – 12 offensive possessions per team – produced 16 points and 10 off-target Field Goal Attempts. Boston’s under-sized starting center snatched exactly half of those potential rebounds before yielding to his back-up. He returned to replicate his showing over the first 14 possessions and 6:54 of Q2, grabbing another six caroms out of the 21 misses up for grabs.

That’s one guy gaining possession of one out of every three available rebounds (.355) during 25 percent of game-time … the type of dominance one might expect of a Russell or a Malone.

But Daniel Theis? (The cool-headed German even went six-for-six from the foul line in Q4 of a game that wasn’t quite as lop-sided as the score might suggest.)

After serving as the first “big” off Coach Stevens’s bench during the Philly Phandango, Enes Kanter logged a DNP Sunday – he had likewise not shed his warm-ups during the Celtics’ “seeding” victory over Toronto three weeks ago. (Kanter did deliver a double-double against the Raps on Christmas Day.) 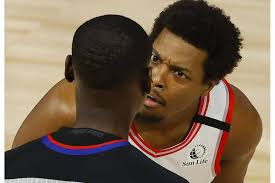 Young Robert Williams got the call in Game 1. Though still foul-prone (four in 15 minutes), RWIII contributed six points, six rebounds and a couple of blocks. (The Timelord, incidentally, ranks second on the team in both steals and blocked shots per-36 minutes.)

Effective clock management in Q2 and Q3, along with a Serge Ibaka Q4 flagrant foul, provided the Men in Green with three additional Possessions, thus a 47-44 edge in conversions.

In four regular season matchups, Boston scored 103 points off 80 Raptor Turnovers while giving up just 77 points off their own 59 miscues – a 26-point advantage.