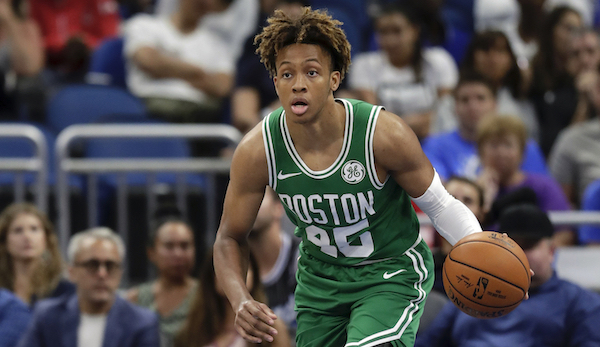 Celtics rookie guard Romeo Langford's injury ravaged season has ended. The team announced his successful wrist surgery which will sideline him through the playoffs.

Celtics guard Romeo Langford this morning underwent successful surgery to repair the scapholunate ligament in his right wrist. He will miss the remainder of the 2019-20 NBA season.


The 20 year old just could never stay healthy. He was injured as Freshman at Indiana University, was drafted injured, and missed last summer league (which feels like ages ago) due to injury. The 14th overall pick would show some glimpses during the 2019-20 season when he was healthy, but then got injured in the 1st round. He was cleared to play again and within like a minute of entering the Game 2 of Round 3 versus the Heat he got injured again.
Obviously some of these issues, and possibly most, are recurring injuries of the same original one. But they one of the key abilities is availability, and for the past 20 months or so that hasn't been a strong ability for Langford.
The Celtics were eyeing Tyler Herro at #14, but somehow that leaked and while he was not expected to go that high, Heat president Pat Riley snagged Herro one pick prior to Ainge. According to Brian Scalabrine, you could hear disappointment in the Celtics war room after that pick.
Not sure if the rivalry simply goes back the the 80's Celtics/Lakers days, but Riley really hates Ainge. Too lazy to look up the quotes but there are some out there. Riley was the one GM who refused to negotiate with Ainge when the Celtics were trying to trade up to get Winslow. Anyway, the Celtics need to do a better job at not having stuff leak out, since it's been very rare in Ainge 17 years at the helm that the Celtics have drafted a very good player outside of the top of the lottery. So when they have one in sites, keep it on lock. Full disclosure: I didn't know that Herro was this good. 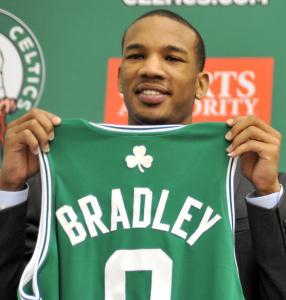 Back to Romeo, if you're looking for a glimmer of home, you can go back a decade to when the Celtics drafted another injury riddled guard in Avery Bradley. Romeo played 32 games in this 2019-20 truncated season while bradley played 31 in his rookie year. Avery eventually got over the hump with his health and became a very solid starter for the Celtics. Besides health, Romeo is also going to have to put in the work to become something solid.
Based on prior draft boards, if the Celtics drafted Romeo 14th, they probably had him even higher in their rankings (Ainge used to say that after every pick, "We actually had him much higher." I've been making fun of it for the past ten years, so maybe that's why he stopped. Point is the Celtics must have thought a lot of him, so while there will be some desire to talk about what a blown pick he was, let's try and be patient and give him another season at least.
Unfortunately again, the offseason is going to be short this season and then likely again next, and that's the time when players often improve. Plus this offseason, he will likely be limited due to his rehab. So there are definitely obstacles impeding Langford and it will be mostly up to him to determine if he ended up being worthy of being a #14 overall pick, or a first rounder for that matter. Again, he showed glimpses. And he's still only 20, so he has a shot.