There's a lot of blame to go around for the Celtics falling down 2-0 in the Eastern Conference Finals. There's always two ways to look at things, should the Heat and coach Erik Spoelstra get more credit for the wins or should the Celtics and Brad Stevens get more blame? Coach Nick from BBallBreakdown illustrates how so far in this series Spoelsta is winnng the "chess match" vs Stevens. Using that analogy, one could say it's a lot easier to lose a chess match when your down a key piece. 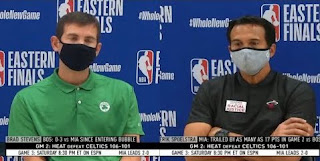 For example would that Heat zone defense be successful if the Celtics had Gordon Hayward? On the other hand, you play with the pieces you have, so Stevens needs to make the proper adjustments. Reality is the chess match isn't over until ther's a check mate and that doesn't happen in a series until one team wins four games. If the Celtics can pull out Game 3 tonight then all of a sudden we have a series.

The Miami Heat came back from a big first half deficit behind a defense that is taught at the lowest levels of basketball and is not normally associated with helping win key playoff games in the NBA. Erik Spoelstra continues to win his chess match against Brad Stevens, and if the Celtics don't do something to iron their issues both on court and off, this series will be over quick.