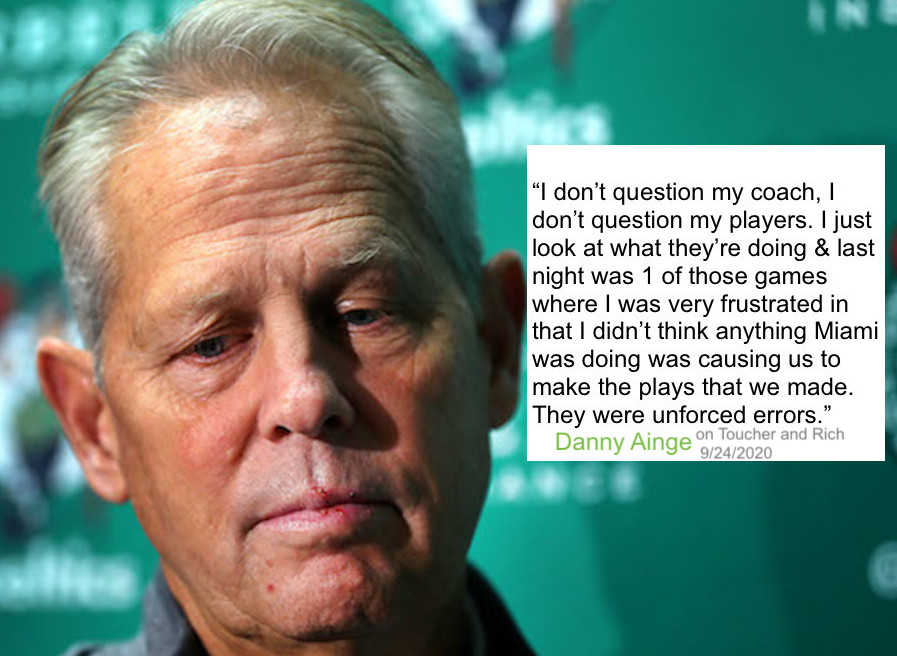 You don't give a coach a contract extension at the end of the regular season with a couple years still left on his deal unless you want him for the long haul no matter what happens in the playoffs. So it's no surprise that Danny Ainge pledged his full support behind Brad Stevens this morning on Toucher and Rich.
This doesn't mean that Ainge wasn't pulling out some hair last night. He wants the team to win as much as anyone. Only one championship and one additional Finals appearance in 17 years at the helm isn't exactly reaching the Celtics high standards of success. Last night's performance in a pivotal Game 4 was unacceptable.


Asked if he’s disappointed with Celtics coach Brad Stevens for the team’s lackluster display, president of basketball operations Danny Ainge had a direct answer.
“Not even a little bit,” Ainge responded during an interview with 98.5 The Sports Hub’s “Toucher & Rich” on Thursday. “Last night, we had so many good stretches in the course of the game, you can see that our players are prepared. It’s just being able to sustain it. The turnovers, there were so many of them that were just unforced turnovers. And so that is frustrating. I’ve always been a person that has taken blame as a player.
I’ve coached in the NBA and understand how hard coaching is,” Ainge continued. “I’ve sat on the bench watching one of my players shoot free throws, and thinking, ‘If he makes these free throws I’m a great coach and if he misses I’m a terrible coach,’ and it’s just obviously not the way. That’s just the way that we look at it sometimes. If we had squeaked out a win last night we don’t question anything, but when you lose by three points you question everything.”