Kemba Walker has been playing "terrible" the last week. He knows it. You know it. Brad Stevens knows it. It's not a government secret. To his credit, Kemba Walker has made no excuses and hasn't blamed anyone but himself. We've seen other stars blame teammates or coaches or gotten upset at reporters when they dare ask about a player's struggles. Kemba Walker is owning his though. 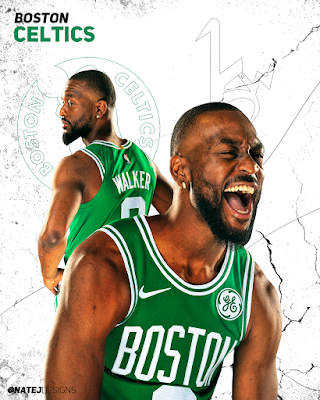 The reality is Kemba Walker is a fantastic offensive point guard. The Celtics were lucky to sign him and he's just going through a shooting slump at the wrong time.

Nick Nurse and the Raptors to their credit found a way to neutralize Kemba and Kemba willingly let his teammates like Jayson Tatum, Marcus Smart and Jaylen Brown get extra shots instead of forcing things. Contested or uncontested, Walker's shooting the past three games has been an aberration.

His 3-point stroke is off. This dates back to the past 5 games actually. Kemba Walker is a much better 3-point shooter than 5 of 34. That's not Kemba Walker. He's hit on 20 of 36 2-pointers during that stretch by the way, so while the stroke behind the arc is in a serious funk, it's not like he's missing everything.

Kemba Walker is an all-star and he knows the Celtics need more out of him, which I believe is leading to him forcing things too much the past game or two (especially yesterday). When he would dribble for 12 seconds and then take a contested shot or drive into multiple defenders you could see a man who was trying to will his way out of a funk and contribute to the team.

I love Brad Stevens as the Celtics coach and having coached myself it's always easy to find something to nitpick about a coach, so I would prefer to stay in my lane. But I do remember in 1995 when Sherman Douglas ended the season extremely hot how the Orlando Magic's game plan was to smother him with double teams bringing the ball up in their first round series with Boston. And it worked, so Chris Ford started having Dee Brown bring up the ball and initiate the offense and Sherman played off the ball.

Obviously different times and eras, but this is nothing new, coaches throwing long defenders and double teams at smaller offensive dominant point guards. It's up to Stevens to make the call if the Celtics are better off just riding things out as is and waiting for Kemba to get his 3 point stroke back our whether he needs to have someone else initiate the offense and have Kemba run the baseline, come off screens, or some other method to get him some good looks and makes, which will lead to his confidence returning.

What you saw from Kemba Walker last night wasn't him. He knows he's struggling and he's trying to fix things himself. Hopefully Stevens can help the cause, but let's not turn on Kemba. Let's have him hear all the way in the Disney bubble how Celtics fans are behind him. This is our team. We are riding or dying with this squad, so might as well trust the Kemba we've seen all our lives and not focus on the slumping one from this past week.