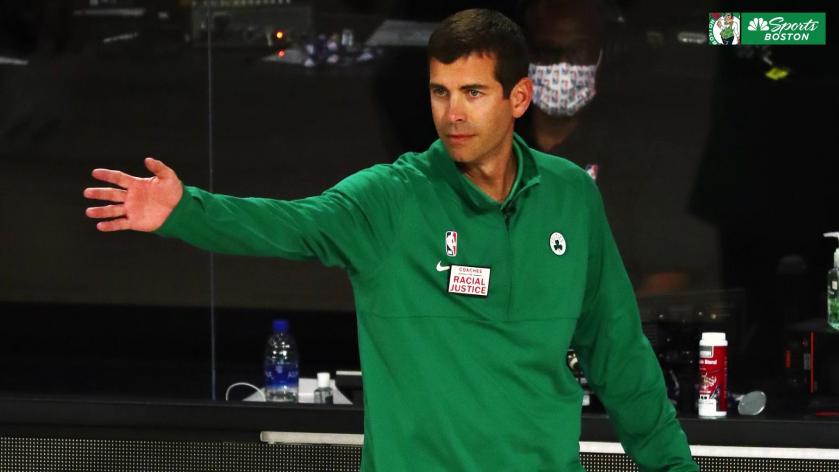 Bob Ryan is a sportswriting legend, but honestly I think both his and Jeff Goodman's takes here are very poor. Here's what I wrote right after the loss on Sunday:

In case you're wondering, Stevens signed a contract extension prior to the playoffs and will NOT be fired as some fans want. He's had four different teams the past four seasons and had led three of them to the Eastern Conference Finals in years they weren't predicted to get there. There was the Isaiah led team of 2017. There was the young guys in 2018 that made the Finals despite the loss of Kyrie and Hayward for the season. Last year's Kyrie led team obviously failed miserably.
They lost Kyrie, Horford, Rozier, Morris, and Baynes this past summer and really only added Kemba Walker. Then Hayward got hurt for the first two rounds, yet the Celtics still made the ECF. Sure Stevens can improve on some things, and I'm sure he'll start working on them very very soon, but he's not the problem for Boston. And long term his calm demeanor works. Every team doesn't need a screamer like Nick Nurse. Erik Spoelstra is another calm, laid back coach and his teams have had a lot of success.

Ryan's criticism that the Celtics have lost three times in the Eastern Conference Finals seems unfair. Would it have been better off if they lost in the first round one of those years instead? If Isaiah Thomas had a functioning hip in 2017 maybe they make the Finals that year. If hayward doesn't fracture his leg horrifically maybe they make the Finals in 2018. If Danny Ainge drafts better outside of the very top of the draft, maybe the Celtics have the depth to get past Miami this past week.


1 way to improve the Celtics is for them to hit on some draft picks outside of the top 3 or top 6. Herro was a #13 pick. Bam a #14 pick. Heat don't get past the C's w/out both of them. C's need to start hitting on picks out of the top 6 to compliment their max salary guys pic.twitter.com/F38tY2ZkYx


Does Stevens have things he can work on? Sure. But hot seat because they were predicted to get eliminated in the first or second round and lost in the 3rd? That's silly. Granted Goodman was pushing the hot seat thing more than Ryan.
Also the 3-point shooting argument was also poor. I highly doubt that that's just Stevens doing. All teams shoot tons of 3's, because teams finally realized that 33% from 3 is the same as 50% from 2. Yes it's frustrating when a game opens with a barrage of missed 3's, but no one complains when they are made. Back in the day some games guys would miss a bunch of long 2's. Stuff happens. I also think Brad does encourage the players to drive to the hoop. The playoffs is not the time to bench a Jaylen Brown or Jayson Tatum for not driving to the hoop. Especially when you don't have depth. One playoff minute of Semi is one too many.
Again, I have a lot of respect for Bob Ryan's career, but complaining about Daniel Theis shooting a 3-pointer? The Celtics had issues in the 2nd and 3rd rounds, but the occasional 3-point shot by Theis wasn't the cause of the failure to advance. Ryan mentions that he shoots 35% from 3. Again that equates to better than 50% if it was a 2. That's a good shot. Plus him being out on the perimeter and showing he can stick that keeps guys like Ibaka or Bam out of the paint.
Guess I was just surprised to see these two be so anti-Stevens. Again Goodman was more so than Ryan, but Ryan didn't just need to go along with Goodman. Add a Tyler Herro to this team instead of a Romeo Langford and they are playing the Lakers in the Finals. Draft a Bam with a mid first rounder and you're in the Finals. Trade for a player at the deadline for some depth and you're in the Finals. Shoot even without any of that, if Hayward is 100% in the ECF, you're in the Finals. and if the Celtics were gearing up for the Lakers right now everyone would be showering Stevens with praise. Just as they are for Spoelstra and last I looked the Heat shot a ton of 3's in the ECF.


Here's some more from the podcast:
How will the Celtics recover from the Heat loss?:

Doc Rivers fired; Who will be next Clippers head coach?: