Here is the latest from Orlando in a very fluid situation:


Sources: The Lakers and Clippers have voted to boycott the NBA season. Most other teams voted to continue. LeBron James has exited the meeting.
— Shams Charania (@ShamsCharania) August 27, 2020

Lot of conversation tonight, but some of the strongest voices on shutting down the returned season have been coming from two teams, per sources: The Bucks and Raptors. Blake shooting happened in Milwaukee's backyard. Raps have experienced this, and Masai body cam footage. Heavy.
— Chris Mannix (@SIChrisMannix) August 27, 2020

Have been told meeting is still going on. Players such as LeBron are calling out the league’s owners AND Adam Silver to do more on social issues. Some players annoyed Silver hasn’t been in the inner bubble like they are and has been notably absent from the resumption. #NBA
— gary washburn (@GwashburnGlobe) August 27, 2020

As one source in meeting said, "We're trying to figure out how to take action." https://t.co/BasFmNl4V7
— Adrian Wojnarowski (@wojespn) August 27, 2020

In meeting, players are demanding an action plan, sources told @SInow. They want to see something from NBA owners. Meeting has been led by Chris Paul and Andre Iguodala, though many other players are speaking.
— Chris Mannix (@SIChrisMannix) August 27, 2020

Before a packed room of teams in a hotel ballroom at Disney, the discussion is centering on whether to continue with the playoffs -- or end the season, sources tell ESPN. So far, there seems to be momentum not to play the three playoff games on Thursday, but nothing's decided.
— Adrian Wojnarowski (@wojespn) August 27, 2020

The NBA has scheduled a special Board of Governors meeting on Thursday morning, sources tell ESPN.
— Adrian Wojnarowski (@wojespn) August 27, 2020 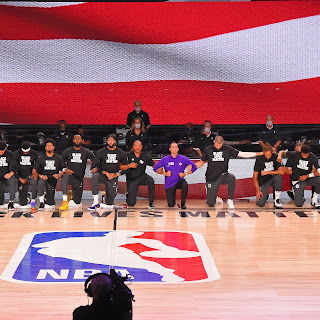 The NBA owners will be meeting tomorrow with no doubt the intent to come up with something to convince the players to stay in Orlando and complete the playoffs. Obviously it behooves both parties financially to continue, but I doubt very seriously the league has any desire to try and call the players on any bluffs. Sounds like a decent amount of the players are willing to give up money to walk away.

Players previously voiced doubts about even wanting to enter the bubble after the George Floyd killing, The NBA worked with the players association to convince players to play partly by adding "Black Lives Matter" to the court and social justice messages to uniforms. Players will be looking for a stronger reason to stay this time around. They want something other than slogans. Though NBA owners are billionaires its unclear how much change they can influence.

The players strength right now is that they appear to be a very united front. It's not just one player or one team. It's essentially all their employees.

Update: The Lakers and Clippers both voted to boycott the season while the remaining teams reportedly voted to continue. LeBron and the Lakers (and Clippers) walked out on the meeting.


Told the players’ meeting ended "ugly," per a source, with uncertainty about what will happen tomorrow. The union will be present at the special Board of Governors meeting, per a source.
— David Aldridge (@davidaldridgedc) August 27, 2020

One thing that is up in the air is whether the Lakers and Clippers have decided to leave now or the vote was to see what the consensus was and the majority will rule. I'm sure we'll get more clarity on this very soon.

Update: And here it is:


The Clippers and Lakers voting on perhaps not continuing with the season was considered more of a polling, than a final vote, sources tell ESPN. The resumption of the playoffs remains still up in the air.
— Adrian Wojnarowski (@wojespn) August 27, 2020