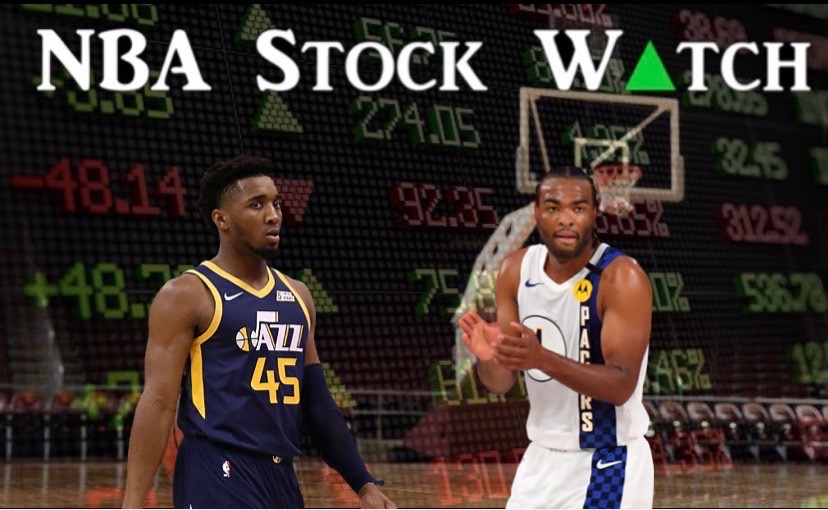 After a four-month hiatus the NBA is back and, no matter how odd it is to watch and listen to, let's embrace it. With everything going on in the world it feels like a miracle that the NBA was able to set up such a secluded and well-organized bubble that prevented any new cases from developing (as of now!). And honestly, I think the bubble will lead to some pretty awesome content (we already got memes from Lou Williams breaking the bubble to go to a strip club, after all).

With the restarted season, comes a restarted NBA Stock Watch. Even though the remainder of the regular season is eight games, and I typically only do these through the regular season, I had to bring it back even if it's for a week or two. So let's shake off the dust and get into the top things trending in the NBA since the relaunch.

A 53-point outing in your first game back from the shutdown is certainly a good way to lock up a spot on the Stock Up. Warren exploded for the Pacers on Saturday, putting on an incredible scoring performance all night long and carrying Indiana to a big win over the 76ers.

The forward's career-high 53 points came on only 29 shot attempts - efficiency that is truly unheard of. Warren finished 20/29 from the field and an unconscious 9/12 from three-point land. He chipped in four boards, three assists, and two blocks on top of the scoring, and despite high usage turned the rock over just one all night. Performance of the night, week, and month so far for the 26-year-old.

The Utah Jazz are fighting for their first four seed in 12 years, and if they want any chance of doing that then they'll need their number one option, Donovon Mitchell, playing at the top of his game. Through their first two games of the restart, he has not been doing this.

Mitchell posted 16.5 points per game on 38% field goal shooting in his pair of games. He converted on just two of his eight shots from behind the arc as his unit - usually a great three-point shooting team - struggled to knock down the three-ball. His playmaking wasn't up to his typical form either, as Spida racked up six turnovers alongside his nine assists. Subpar games for this young stud will be costly for the Utah Jazz, so look for Mitchell to find his stride soon.

No one may have benefited from a paused season more than Dallas big man Kristaps Porzingis. After tearing his ACL and being trading to the Mavs, Porzingis was still trying to find his stride in the 2019-2020 campaign. He never really looked like his pre-injury self. After 1.5 games into the restart, it looks like that may have been put to rest (yes, I'm writing this as the Mavericks game is at halftime...not trying to stay up until 1am!)

The 7'3" unicorn has looked amazing in his games back. In an overtime loss to the Rockets, Porzingis scored 39 points while making half of his shots and hauling in 16 rebounds. Halfway through his second match against the Suns, he had already registered another 20 points on7/11 shooting. That's 59 points in about just as many minutes for the big man, a great sign for Mavericks fans. A clicking Porzingis paired with Luka Doncic is a stealthy duo in the making for Dallas.

The one bubble team (in both sense of the term) that the league clearly wants to make the playoffs is the New Orleans Pelicans. This is clear. LeBron James versus Zion Williamson in a seven-game series? He wouldn't want to see that? Yet, the Pelicans are 0-2 so far in Orlando as their playoff odds are narrowing.

The Pelicans kicked off the restarted season last Thursday against the Jazz and, after a back-and-forth affair much of the night, couldn't close the deal. They scored just 17 points in the final frame to allow Utah to come back from an eight-point deficit. Then on Saturday, the Pels had a true test to see how they faired against the league's top talent - the LA Clippers. And they failed quite miserably, finding themselves down 30 points at halftime and ultimately losing by 23. This young group needs to find its footing in a hurry.

Saturday night was an odd time for Celtics fans - most of them probably found themselves rooting for the Los Angeles Lakers. In a primetime matchup, the Raptors and Lakers squared off on the Orlando bubble hardwood and Toronto instantly came out of the gates on fire. They built an early double-digit lead before the Lakers even scored a point, and although LA momentarily fought back, Toronto had control for most of the way until they captured the win.

The Raptors were clicking on all cylinders and showed no signs of rust. The way they were playing - with fluid ball movement and in-sync defense - had the appearance of a team that took no time off since March. At a time when NBA scoring is at an all-time high, Toronto held LeBron James, Anthony Davis, and the Lakers to 92 points. Offensively, their unselfish mentality paid dividends all night long and, as icing on the cake, Kyle Lowry has apparently learned how to shoot threes during the quarantine. After their first night back, Toronto appears to be as serious a threat in the Eastern Conference as anyone.

The Grizzlies are clutching onto the 8th seed with all their might. With the new rules in place, it was in Memphis' best interest to preserve their lead over the 9th seed to prevent a play-in round. However, they've opened up their restart 0-2 and quickly see some foes coming for their spot (although the aforementioned Pelicans might not be one of them).

Memphis lost two winnable games to teams that are right on their tail in the standings. First, they saw the Trail Blazers hand them a defeat in overtime where their young talent flourished but their defense struggled. Two nights later, the Grizzlies had another disappointing loss to San Antonio despite a near triple-double for Ja Morant. Memphis's youth and lack of depth are holding them back so far in this restart.

The Bucks may have won the matchup against the Celtics on Friday night, but Jaylen Brown was the real winner. The Celtics guard took to Instagram to portray his disapproval of the reversed charge call on Giannis late in the 4Q by sharing someone's great photoshop: 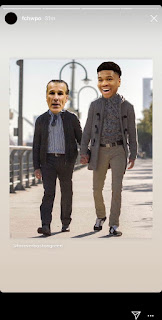 For those not keeping up, the head on the left belongs to referee Ken Mauer. JB's trolling is already in midseason form

Ok so obviously there's no actual fans at these games. We all know this, I wouldn't waste your time talking about it. What I mean here is that the virtual fan attendance could be better!


Battle of LA on (Re)Opening Night and there are this many empty seats? C'mon guys!

Side note: Of course I'm kidding, I love the virtual fan concept. Especially when we see Chris Bosh, Paul Pierce, Deuce Tatum, and others in the digital crowd!

Not only did rapper J. Cole release new songs two weeks ago, but according to a very legitimate source (Rapper Master P), he is training and attempting to make an NBA roster for next season. Yes, this was real news this weekend and it appears to have at least some validity to it - whether or not it actually happens is a whole other story!

Cole released his own pair of signature shoes with a video of him working on some shooting drills. In the video, Master P is hinting that J Cole is going to try doing something that seems improbable:


Master P, who is also one of J Cole's mentors, confirmed that the 35-year-old artist was going to make a serious attempt to do this. We all know Cole can ball - and could have potentially played professionally if he pursued it initially - but could he hang with the top dogs while in his mid-thirties?

By the way, Master P got signed by the Charlotte Hornets in the 90's so who knows!


Well, it feels good to be writing these posts again. Thanks for reading through and make sure to leave your comments below on who you think is trending up or down from the first few days of the restart!