No blowout win this time around for the Celtics. It took the Celtics to an extra frame to finally put away Bubble host's the Magic tonight. 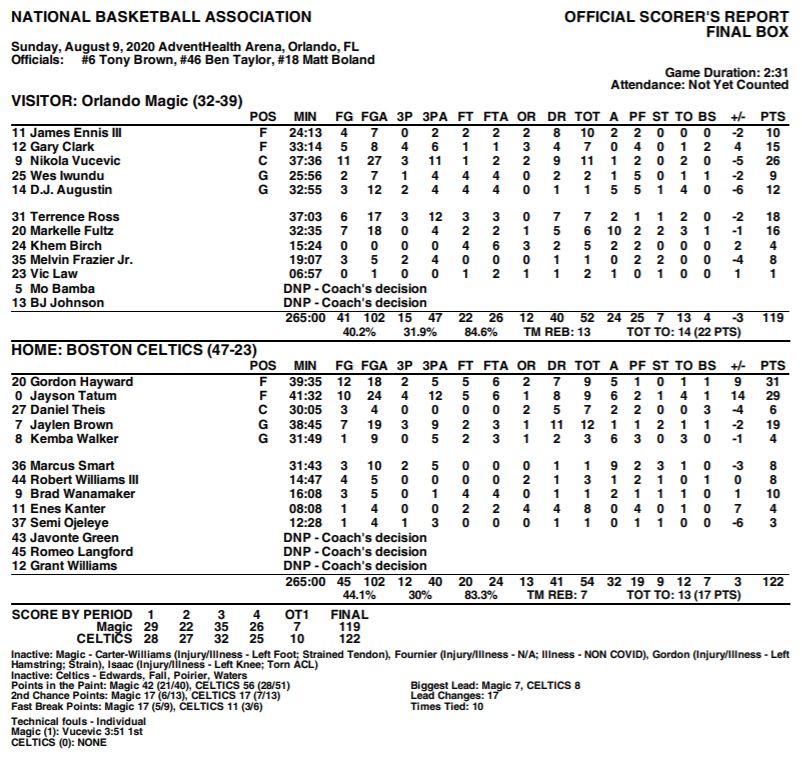 Brad Stevens, with Boston locked in as the No. 3 seed and with Memphis next, says the West’s tight playoff race won’t impact his decision on who to play/rest. Says he’s only focused on his team.
— Chris Mannix (@SIChrisMannix) August 9, 2020

"We've been up and down in the bubble... We can be a lot better." Gordon Hayward discusses the Celtics OT win after his 31 point night

Jaylen Brown (@FCHWPO) opened his post-game press conference by once again demanding justice for Breonna Taylor. He then offered his perspective on the term “police brutality,” which he suggested should be viewed as “domestic terrorism.” Listen up: pic.twitter.com/i6x3cWrlpo
— Taylor Snow (@taylorcsnow) August 10, 2020

Updated standings. Bucks, Raptors and Celtics are locked in at 1,2, and 3 respectively. 4-6 remain fluid, which means the Celtics could be facing any of them.

The Charlotte Hornets continue their non-Bubble rise as they've opened up a 1.5 game lead on the Wizards pic.twitter.com/iCoeqIreBe