Now that the NBA is officially back, there have been rumors that the Boston Celtics may find their way to the NBA Final and possibly win the Eastern Conference. However, the Milwaukee Bucks and the Toronto Raptors are still edging out ahead, so can the Celtics put up a good enough fight to still come out on top? The sportsbooks are thinking about it.

Brad Stevens has really put in the work to make the Celtics into a well-rounded team. The current team includes point guard Kemba Walker who effortlessly sets up shots for his teammates, with Jaylen Brown also playing well and sending shock waves through the NBA when he was skipped on for an All-Star place. Gordon Hayward has been scoring consistently, although the spectre of his broken ankle injury can still be seen sometimes in moments of hesitation. 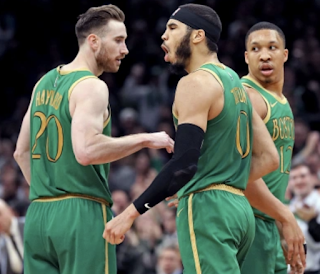 All-Star selection Jayson Tatum is confident his team will go all the way to the Finals, boldly declaring that every time he goes out onto court "I think I'm the best player every night". However, defense Marcus Smart may be the true heart of this Celtics team. Often compared to Draymond Green, with his playing style incorporating hard work and high octane energy every time he is out on court, Smart really brings it every game. The Celtics currently sit 5th in the NBA when it comes to offensive performance, and 4th for effective defensive, both very decent places to start in.

The biggest issue the Celtics face however may well be themselves. The team have fallen foul of an unfortunate amount of injuries of late, with some fans even dubbing them the 'Hospital Celtics' as a result. Can the Celtics get back to their NBA final performance level displayed against the Cavs back in 2017, or are they too far behind in terms of injury setbacks which inevitable cause disruption to the team? Or can star player Jayson Tatum help them bring home the title of the Eastern Conference? Whether or not they are able to see off the Nets (and former Celtic, Kyrie Irving) the Trailblazers and the Bucks during their next slated games remains to be seen.