Pro Hoops in the Stone Age 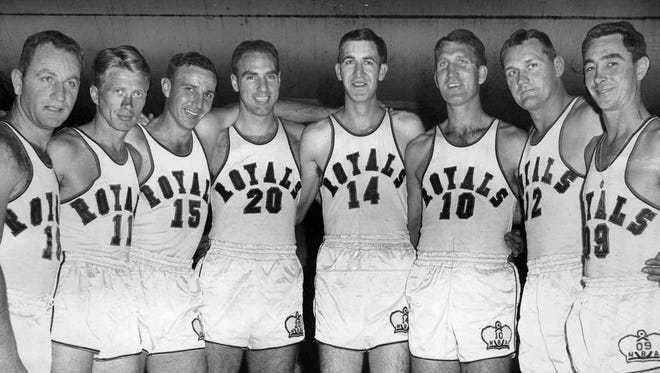 Here’s a taste of the life of a pro hoopster (fella called “Red”) in a by-gone era … listen up!


After some Saturday night games in Rochester we’d catch a sleeper [train] to Waterloo, Indiana, and arrive about 5:30 on a Sunday morning. We’d get off the train in the cold pitch-black air and walk alongside the railroad tracks toward the town, like vagabonds …


There was always this man waiting for us with his wife. They owned a coffee shop called The Green Parrot Café. We’d stagger in and it was like finding a warm oasis. I can still remember the taste of those breakfasts … We’d have our fill and then get into cabs and take the half-hour ride into Fort Wayne, check into the hotel, and sleep until game time.


Games against the Pistons were played in the North Side High School gym … called the “bucket of blood” because of the rabid fans … Fort Wayne was a tough place for a visiting team, but Oshkosh, Wisconsin, was no bargain either. There the local police chief reffed the games, and he wasn’t afraid to blow the whistle.


Naismith Hall of Famer (class of 1986) William “Red” Holzman, most well-known as head coach of the only two championship teams in New York Knickerbocker history, was named Rookie of the Year while winning a professional championship in 1945-46.

[Alas – and as is likewise true of the “pre-merger” statistics of the ABA’s players – Red’s accomplishments in the old National Basketball League are not acknowledged by the Association.]

Red Holzman is on the far left in the team picture (early 50’s).

Also in that picture is a future Celtic – indeed the man who would tutor a rookie Bill Russell – and he’s standing to the left of the only coach (another HOFer) who would ever defeat Mr. Russell’s squad in an NBA playoff series … not to mention two other Springfield enshrinees inducted as players, both named Robert and both out of Seton Hall.