Jayson Tatum: "I step on the floor, I think I'm the best player" 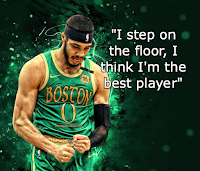 Jayson Tatum was tearing up the league prior to the hiatus. The Celtics will need him to be a superstar in order to lead this team to the Finals, especially if fellow all-star Kemba Walker's knee remains an issue. Tatum seems aware of the situation and sounds more than willing to not only be "the guy" for the Celtics, but also in the league.

Yet another similarity to Paul Pierce, who while he never was an MVP candidate, he definitely always felt he was the best player on the floor and that confidence helped him to achieve even more. Not saying Tatum doesn't have the potential to win an MVP in his career. His ceiling is pretty high.