Victor Oladipo would have a lot of money to lose if he had an injury setback this summer in Orlando. Oladipo returned to the Indiana Pacers prior to the March shutdown, but his skills weren't back to his former all-star self in the 13 games he played in (10 starts). 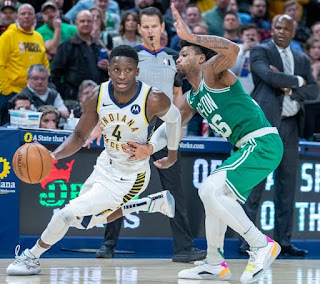 In terms of how this effects the Boston Celtics and a possible match-up with the Pacers in the 1st round (or subsequent rounds) it's hard to speculate. Some would argue the Pacers looked better this season prior to Oladipo's return, but then again the playoffs are a different beast and you want all the weapons you can have.

So in my opinion, I think the loss of Oladipo hurts the Pacers, but not as much as one would think. They'd still be a formidable foe for the Celtics in a playoff match-up, but the Celtics are the better team and "should" win that series if all Boston's players are healthy. Oladipo at 100% would have scared me some, but it sounds like we weren't going to see that even if he had chosen to play.

Speaking of Eastern Conference teams playing shorthanded, the Brooklyn Nets are now up to six players that won't be joining their squad in Orlando. 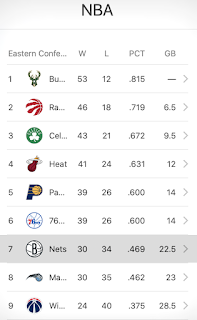 The Nets currently are in 7th place in the Eastern Conference standings. They'll likely end up in 8th with the hometown Orlando Magic surpassing them. Unless they essentially lose all their remaining games while the Wizards win all of theirs, the shorthanded Nets will be in the playoffs when all is said and done. Wonder what the odds of the Nets winning the champion are on Free Bets? Guessing they are about as astronomical as a playoff team's odds have ever been.

This has significance for the Celtics as Boston's main competitor in the Eastern Conference is Milwaukee and if the Bucks have a cakewalk first round series versus the Nets, it means they won't really have to put it into high gear until the end of August when the 2nd round starts up. Your guess is as good as to who the Nets will throw out there with so many players absent. Also so there's no guarantee that their number of players sitting out will remain at just six.