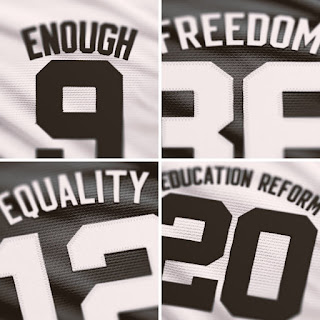 It was revealed that eleven NBA players chose "Education Reform" for their social justice jersey slogans on Wednesday. Of those eleven, all were persons of color, except for the Celtics' Gordon Hayward. That didn't stop the Twitter mob from attacking Gordon Hayward mercilessly after the Celtics unveiled his jersey choice in a tweet. Gordon Hayward quickly trended on Twitter with tweet stating how racist Hayward was for choosing Education Reform.

Of course anyone who has ever taught in inner city schools, sent their kids there, or went there themselves knows that education inequality is one of the major things that is keeping Black people behind. Education reform is may be the biggest solution to equality issues. Didn't matter. Hayward was attacked over and over again just a few days after he said he has chosen to avoid social media.


How does anyone spend so many years being teammates with young black men and still be the way Gordon Hayward is? Height and a jump shot was the only thing standing between him and a back full of racist tattoos. https://t.co/RiyqT4b1Gr
— Mike (@85mf) July 29, 2020

Gordon Hayward is a coward for that “Education Reform” statement
— One Time For Breonna/George/Ahmaud/Elijah🎗 (@tawlblackguy) July 31, 2020

Gordon Hayward going with "education reform" when the entire team is going for BLM and associated phrases is so on brand its not even funny.

When you click on these trending topics/names you sometimes end up in a very disturbing place. Apparently the most recent hate for Hayward began when it was discovered that his wife who is expecting their fourth daughter is a Republican. Thus she was branded a racist and Hayward by connection. And since Hayward was already now a "confirmed racist" due to being married to a Republican, then of course his jersey pic had to be stoked by his love of the KKK.

Personally I have no idea if Hayward is racist or not. I'm going to guess that I'd find it very unlikely that he is indeed racist. Never heard one racist thing out of him and people that have known him the longest Like Brad Stevens or teammates, past and present have never said a bad word about him. Kemba Walker tried to recruit him to the Hornets years back and he actually signed an offer sheet with them. To play for the NBA franchise with the lone Black owner nonetheless. Kyrie Irving wanted to play with Hayward as well.

Look you can't control every fan that wants to spew venom either at games or on social media. But to get to the point for Hayward was trending means it wasn't just a few fans, or even several. Or even a ton for that matter. It means that a huge amount of people decided that Hayward was racist mostly because they wanted him to be. They were looking for something to attack him on. And I'm not sure if anyone even came to his defense.

Again none of us know these Celtics players, management, ownership, or employees personally. Who knows who is racist or not. Personally it seems like this year's Celtics roster is full of really good people. Based on trending topics from Wednesday, we really need more good people in this world and less hate.

To people's credit there were a decent amount of tweets later in the day responding to Hayward trending is support of Gordon.


Brad Stevens expects all the Celtics to take a knee during the anthem tonight. What are your thoughts?