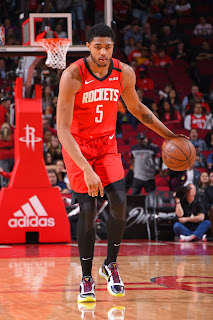 The Kings Richaun Holmes has also reportedly broken quarantine rules, but Bruno Caboclo gets the honor of being first. Hoping that all NBA players are having to follow the same rules and there is no special treatment for star players. We're talking about a life and death contagious virus here. Not Allen Iverson getting special treatment to miss practice.

It should be noted that no superstar has been suspended for PED use yet. The Suns Deandre Ayton and the Hawks John Collins, who were both suspended at the start of the season for PED use, are probably the biggest name players to be penalized. Rashard Lewis was also suspended several years back, but he was already on the decline.

Anyway, wondering how the NBA and its security team will handle the first violation by an all-star.

Related: Elephant in the room: How will NBA players cope with no sex for 2 months?
Video: Inside the NBA bubble
NBA bubble being compared to Fyre festival as players share sad food, living conditions