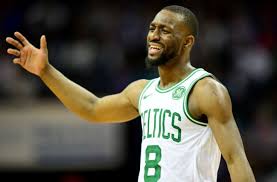 Two weeks ago we heard from Gordon Hayward that his foot is still sore and today Brad Stevens fills us in on Kemba Walker. Apparently a few months off didn't alleviate his knee discomfort completely. Yes, Kemba said a couple weeks ago as well that he feels much better than before the hiatus when he was missing games and completely banged up, but for a team that has a goal of going deep in the playoffs, this isn't what you want to hear about one of it's all-stars after he gets back on the court.

Walker's minutes will definitely be managed during the remaining eight regular season games. But the question is will they also have to be managed throughout the playoffs? Will Kemba have to sit out some games during the playoffs? Please don't shoot the messenger here. Would much rather write that Kemba's knee is now 100% after the layoff. Keep your fingers crossed that Walker can remain healthy.

Kemba Walker did not practice today. He’s still in a “progression” as the Celtics strengthen his knee, according to Brad Stevens.
— Jay King (@ByJayKing) July 12, 2020

Brad Stevens said the Celtics want to strengthen Kemba Walker’s knee. He’s ramping up so that he doesn’t have setbacks once they start playing. He’ll likely have a minutes restriction when the Celtics start games.
— Jay King (@ByJayKing) July 11, 2020

Knee might be feeling some discomfort, but shooting stroke is at 💯 pic.twitter.com/b4r3ruGosj

Related: Kemba Walker says the break ended up being in his best interest, so he could rest knee
Gordon Hayward says foot is still sore, will miss time with Celtics in playoffs for birth of child