Is Boston Celtics star Jayson Tatum skipping the rest of the NBA season?

Boston Celtics all-star Jayson Tatum has been reported as being prepared to skip the rest of the NBA season because he hasn’t been awarded a max contract yet.

These reports have been proven to be wholly false and Tatum himself has confirmed that he will be joining the Boston Celtics in Orlando next month. This is great news for sports betting fans and those placing bets online at USA online casinos.

Where Did the Rumors Come From?

The original report in the New York Daily News said on Tuesday night that Tatum was reluctant to risk injuring himself before he had received a max contract. The report from Stefan Bondy read, “Then there’s the threat of injury, which is especially significant to players on the verge of big contacts.” 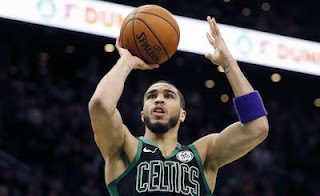 Bondy claimed that a source close to forward Jayson Tatum told him that Tatum was reluctant to play on and risk his chance of landing a max contract.

NBC Sports Boston’s Sherrod Blakely denied these rumors categorically. Although there are valid concerns regarding injury, the idea that Tatum is seriously considering the possibility of skipping Orlando has been dismissed.

Blakely said, “Not true. He’s concerned, like every other play about returning to play. There’s a lot…going on in the world that players need to be more concerned about. But sitting out because of the contract? Hell no!”

Even though the original story appears to be false, it may be a smart business decision for Tatum to skip Orlando. After all, although there will be a champion at the end of the season, in the eyes of most in the NBA, it will be a tainted title not afforded the same prestige as a title awarded during a normal year.

Is there any reason for Tatum to risk a major injury for a championship that will be more of a mere curiosity than something to be taken seriously?

Will Tatum Receive a Max Contract?

ESPN’s Brian Windhorst claimed that it’s highly likely that Tatum will be awarded a max contract this coming offseason.

Windhorst said, “If Jayson Tatum is the superstar that they envisioned when they began this whole rebuilding process when they traded Kevin Garnett and Paul Pierce for all of those draft picks hoping to land a player like this, we could see ‘Glory Days’ for the Celtics again.”

With Tatum performing so well in the NBA, a healthy Tatum in the offseason will want to get paid. If he goes on to ink that max deal, he will be paid either 25% of Boston’s salary cap or $25.5 million per year, whichever figure is greater.

Of course, even a minor injury wouldn’t necessarily stop him from receiving a max contract.

Has Tatum Spoken Out on the Rumors Yet?

Tatum has been quiet during the coronavirus pandemic. Although he spoke to the media back in April, claiming that he hadn’t picked up a basketball since the Celtics’ last official game, he has remained silent.

Both the reports that he’s planning on skipping Orlando and the subsequent denials haven’t come from Tatum himself or any named source close to him.

For all anyone knows, this entire saga could have come out of nothing, but there’s definitely logic to Tatum’s thinking if he ever was considering skipping Orlando.

As it stands, expect to see Boston’s young superstar on the court from next month.