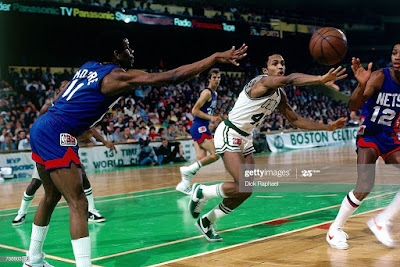 While the words “Havlicek Stole the Ball” will live forever in the mythology of the Boston Celtics, Mr. Most’s iconic description of Hondo’s famous game-saving “heist” really doesn’t stand up to scrutiny – at least not the kind of scrutiny currently applied to NBA play. The Bouncin’ Buckeye, aware that the five-second inbounding clock was running, lunged to deflect the on-coming pass AWAY from Philly’s Chet Walker, after which it was subsequently gathered up by an alert Sam Jones. The game’s final seconds elapsed before the Sixers could even attempt to commit a desperation foul.

“Greer gets it in deep, and Havlicek steals it, over to Sam Jones … It’s all over!”

Have you ever looked at the NBA’s definition of a “steal”? To be awarded a steal by today’s standards, the Official Scorer must deem that the player has met two conditions: (a) has gained enough control of the ball to re-direct it where he so chooses, and (b) has sufficient “court vision” to know a teammate will secure its possession. (There’s actually a third “requirement” we’ll get to in a jiffy.)

While Havlicek saved the day, Sam Jones gets credit for the steal, bureaucratically speaking.

There’s no such semantic subtlety about what happened on the very same parquet as the final seconds of yet another tight playoff tilt were winding down ON THIS VERY DATE 19 seasons later.

Larry Bird and the rest of the Successors of Havlicek, having already lost Game 1 of the NBA Finals at home to the Showtime Lakers, were on the verge of dropping into an 0-2 abyss until …

How many times have we seen this happen over the past six seasons? Marcus Smart, harassing a ballhandler, pokes the ball free; in the ensuing scrum, the ball goes out of bounds last touched by the offensive player.

While Coach should give Marcus a gold star for his effort and accomplishment (and while the offensive player will be charged with a Turnover), a defensive player is NOT credited with a steal for this “achievement” … for an official “steal” to be awarded, the ball must remain in play.

A steal is credited to a player that legally takes the ball away from an opponent, intercepts a pass, or otherwise obtains possession on the ball following an opponent’s turnover (provided the ball has remained in bounds and the clock has not stopped). If a player deflects a pass or dribble and controls his deflection either away from an opponent or towards a teammate resulting in eventual possession for the defense, the player causing the deflection is credited with the steal.

For a fairly recent interview (2016) with Henderson (including his take on this clutch play), check out Gerald’s appearance on The Handle Podcast with Reinis “Lamarmatic” Lacis.

Though a Charlotte Hornet fan, Reinis has been a big supporter of Celticslife and its contributors for as long as I’ve been “hanging out” hereabouts.