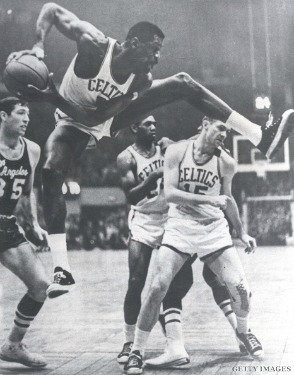 Ultimately, you play to win THE GAME – ideally an everything-on-the-line Seventh Game.

And no one came out a winner more consistently in such games than the great Bill Russell … ten for ten.

Check out the Hall of Famer’s AVERAGE performance for those 10 games (via basketball-reference.com): in 48.6 minutes of PT, he’d score 18.6 points, grab 29.3 rebounds and be credited with 3.7 assists.

Russell’s most dominant Game 7 showing occurred in the very first series ever to pit the Celtics with the LOS ANGELES Lakers 58 years ago – and in both a game and series that Coach Auerbach’s boys seemed to be doing their damnedest to lose (and Frank Selvy had a chance to win in the closing seconds of regulation). [For historical clarity, Boston had rather easily dispatched a diminished Minneapolis Laker squad in the 1959 championship series, a four-game sweep.]

By losing Games 2 & 5 at home, the Celts had put their quest for an unprecedented fourth straight title into a 3-to-2 hole, but staged a second half rally to thwart an LA victory party in the sixth game to set up the Game 7 Garden Showdown on Wednesday April 18.

A still-physically-sound Elgin Baylor and hardly-jinxed-sophomore Jerry West combined for 76 of the Lakers’ 107 points – also 70 of their 108 FGA’s. But the rugged C’s won the rebounding battle convincingly (82-65). 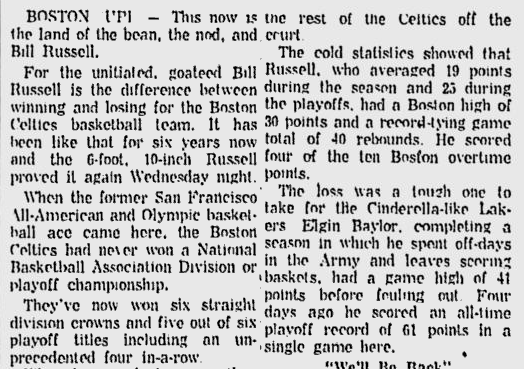 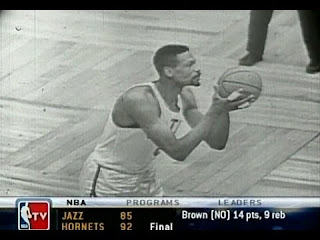 For his career, Bill Russell was a 56 percent free throw shooter during his 963 regular-season outings, which he elevated to 60 percent in 165 playoff tilts. Russ’s FT accuracy improved to 70 percent (50-for-71) while competing in a Game 7.

1962 was the only post-season in which Bill faced two seventh games, as Wilt’s Warriors had also pushed the Green Team to an ultimate game in their final season before moving west – also the season the Dipper averaged 50 points a game. Mr. Russell converted 19 of 22 (.864) from the charity stripe under such extreme pressure. 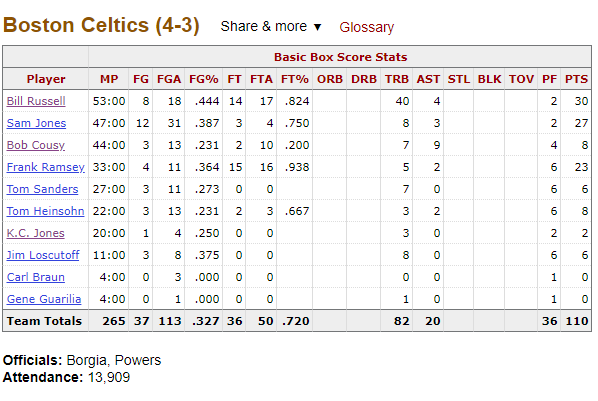 In addition to his 10 “Sevens,” Russell & Co. faced Oscar Robertson’s Cincinnati Royals in a winner-take-all opening-round Game 5 in 1966. Against future teammate Wayne Embry, No. 6 tallied 16 points, snared 31 caroms and dished out 11 assists.

In total, a Russell team faced playoff elimination on 19 different occasions and were beaten but twice.