Quarantine Question of the Day: Who had the more impressive Slam Dunk Contest performance? 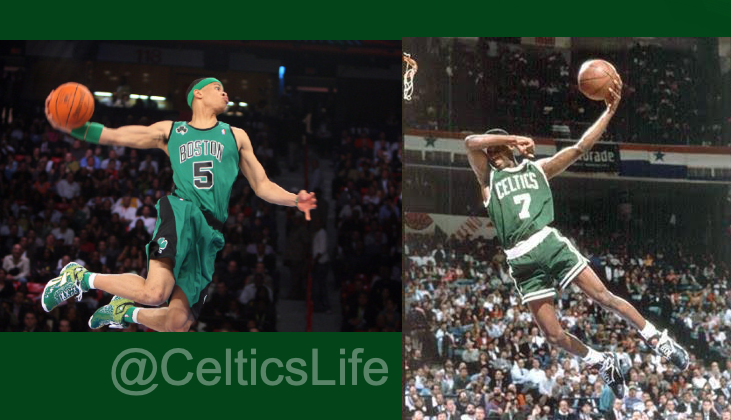 Today's question:
Who had the more impressive Slam Dunk Contest performance Dee Brown in 1991 or Gerald Green in 2007?

I was more excited about Dee Brown in '91 due to the fact no Celtic had ever been in the contest let alone won it at that time. His "Dominique dunks" for a guy his size got you out of your seat. Gerald's athleticism though was absolutely ridiculous and Dee couldn't compete with that.

Also, the judges for the 2007 contest? Wow. Quite impressive the NBA was able to get them all. I'm going to go with Dee was more impressive as my final answer to this question.

Now if the question was who was a better dunker in general well Gerald Green had had some ridiculous in game dunks (or even dunks at practice). I think Dee lost a lot of his explosion after he injured his knee prior to his second season. Seemed like he changed his game after that and became more of a jump shooter. Rookie Dee Brown (especially in the playoffs) was quite an impressive point guard. He'd drive to the hoop with reckless abandon. After his injury he wasn't the same as a point guard and eventually shifted over to the 2 guard spot.

Pretty crazy that Gerald Green came into the league straight out of high school and is still in the league at the age of 33. He had a two year hiatus in Russia, but a 12 year NBA career is nothing to sneeze at. Obviously he never became the next T-Mac, but that was an unfair expectation to put on anyone, let alone a #18 overall pick. Fun Fact: Gerald Green is older now than McGrady was his final season in the league.

Previous Quarantine Questions of the Day:
Quarantine Question of the Day: PICK ONE!
Remember this Bird/MJ commercial and who do you think would have won?
Who wins a HORSE competition between all-time Celtics greats?
How many left-handed C's can you name off the top of your head?
What are some of your favorite buzzer beaters in Celtics history?
You're 18 yrs old, off to college, & your roommate is which Celtic?
Who was a player you hated... and then he became a Celtic?
Who are your favorite non-Celtics players in today's NBA?
Who is the best looking Celtics player in team history?
Who are the best ball handlers in Celtics history?
Which five Celtics in team history had the best post moves?
What's the greatest Celtics game you have attended?
Who are the five toughest Celtics in team history?
Who was your favorite Celtics player while growing up?
Name a former Celtic who would excel in the modern NBA?