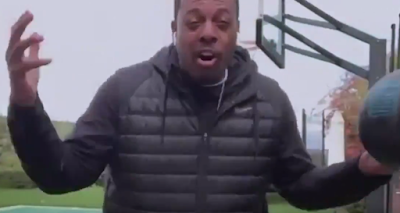 Used the word "entertains" in the title, since Paul Pierce didn't exactly shine basketball wise today. Retired All-Star Chauncey Billups pulled off an upset over Trae Young, which gave some hope that Pierce could knock off Zach Lavine. The Truth couldn't hit his shots and while dunking wasn't allowed, Lavine definitely used his athleticism to his advantage. Pierce did have an excuse as it was a rare rainy day in Southern California. Pierce had the scooter out for his next shot hoping to give Lavine his first letter, but Paul ended up with HORSE before he had a chance to use it.

"Tap the backboard with the left... reverse on the right!"@ZachLaVine leads @paulpierce34 in Round 1 of the NBA Horse Challenge presented by State Farm! pic.twitter.com/shiBmGyunK
— NBA (@NBA) April 13, 2020


the best part of HORSE has been watching the kid behind paul pierce spin to the point of stumbling pic.twitter.com/2nje7tVu1f
— Ashley Young (@young_ashleye) April 13, 2020


.@ZachLaVine runs the table on @paulpierce34 and advances to the Semi-Finals!

Remember the iconic Larry Bird in the 3pt contest with his warm-up look?