The Algebra of the Game: Overtime & the 3FG

This “seasonal” data is virtually identical to the league figures from the ’18-19 campaign – indeed, the OR and TO numbers as well as the shooting rates vary very little from the data of TEN years ago.

Exactly 330 of those 40-some thousand minutes of NBA competition this season occurred after the conclusion of Q4. On 61 occasions, a ballgame extended into Overtime, five of them requiring a second session to determine a winner.

To what extent, do you suppose, does the “quality” of OT play compare to performance in the First 48? Legendary players – the studs – tend to “step it up” under such circumstances, but most players … hmm? 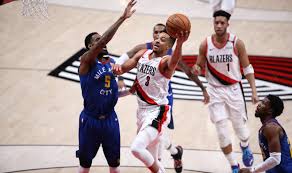 Two out of three (40 out of 61) OT contests are decided by five points of fewer – even though the average margin of victory in OT games this season is 4.9 points. [OT Winners outscored Losers 853-552, roughly a 14-9 edge per game.]

Losing squads took 44.7 percent of their shots from behind the arc, compared to a 35.0 percent “long-bomb” rate for their opponents.

OT play in recent NBA Post-seasons has indeed provided us a few thrills – in a variety of ways. Just last season, Portland and Denver staged a four-OT marathon in Game 3 of their Conference Semi-Final … while during the opening round in 2014, the Thunder and Grizzlies needed an extra session to determine a winner in FOUR of their seven match-ups, while the Blazers and Rockets went to OT in three of their six outings.

During the post-seasons of the 2010’s, 53 games needed OT, producing 63 extra sessions. Here’s the cumulative data:

Related:
The Algebra of NBA Over-time Competition, circa 2020
NBA Playoffs Thru the Years: The How's and Why's
It takes some balls to shoot THAT many threes