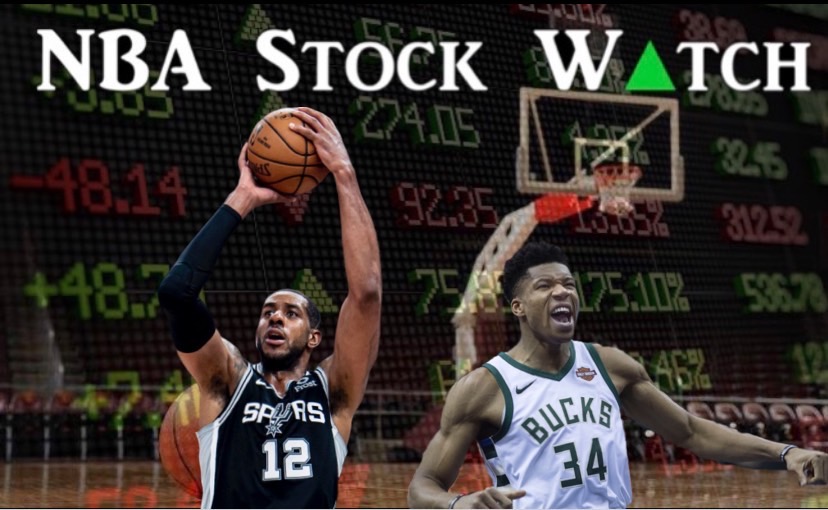 It was a long start to the week with no NBA games to watch, but we made it through folks. The regular slate of games in back in effect, kicking off last Thursday. Most teams have only played one or two games since we've last met, but that doesn't mean there isn't a lot to breakdown from that time!

This week we'll discuss the reigning MVP's hot start to the second half, two teams from the East that had perfect weeks, an awesome Kobe tribute in the NHL, and much more.

The Greek Freak is picking up right where he left off. In two games, the forward (or guard? center?) posted some big numbers and got his team right back into the win column in both contests.

Antetokoumpo averaged 32pts, 16.5reb, 6ast, and 1.5stl in his matchups against the Pistons and Sixers. Per usual, he was unstoppable with the ball in his hands, scoring on 62.5% of his shot attempts. He finished the week sixth in scoring, first in rebounding, and a league-best +32 point differential. Giannis had twice as many assists as he had turnovers, translating to some solid playmaking in addition to his dominant scoring. The Greek Freak's stock continues to soar as we move along in the season.

Alridge really held down the San Antonio Spurs this week. In his short slate of games, the big man was a -11 on the court and was inefficient across the board.

In 27.8 minutes per game, Aldridge averaged a lowly 11.5 points. He missed two-thirds of his shot attempts and made just 12.5% of his three-pointers while taking four a game. Even his rebounding was way down - the Spurs forward pulled in 5.5 boards per game, 2.8 below his career average. I don't know if Aldridge was partying too much over the All-Star break or what, but he has stumbled out of the gate. Knowing his history, it shouldn't take much for him to bounce back.

It's a bit of a surprise that Thad Young wasn't traded at the deadline this year. The veteran forward has lost some value playing on a bad Chicago team this season. In his first three games since the All-Star break, though, Young has been ballin'.

The 31-year-old posted great all-around numbers this week. He averaged 19.3pts, 7.3reb, and 3.7stl on 53.5% shooting from the field. He easily led the league in thefts, snagging 11 steals through his three games. At the same time, he stretched the court for the Bulls by knocking down 3.3 threes per game on 66.7% shooting. His squad went 1-2 on the week, but his numbers speak for themselves.

The Raptors have been absolutely rollin'. They've won 17 of their last 18 games, and have started the second half on the right note by capturing two straight victories.

In their pair of matchups in week 17, Toronto steamrolled their opposing teams. They started off with an easy win over the Suns on Friday. Then on Sunday, The North played a scrappy Pacers team and blew them out by a whopping 46 points. Although Pascal Siakam and Kyle Lowry lead the way, they have a deep roster that has been playing great basketball. Between these two wins, the Raptors led the league in point differential, winning their matchups by an average of 31.5 points. Look out - Toronto could have another Finals run in them even without Kawhi Leonard.

It's a small sample size, but the Clippers looked awful in their lone game of the week. Coming out of the break, Los Angeles hosted the 22-33 Sacramento Kings at Staples Center and failed to pick up the win.

LAC looked sloppy throughout their matchup, turning the ball over 19 times compared to the Kings' 13. They only had one more assist (20) than they did turnovers, highlighting the poor playmaking in this one. As a result, the Clips posted the third-worst offensive rating in the league through week 17 at 98.1. So far, it seems like their reload at the trade deadline isn't paying off, as they slide even further from the Lakers in the Western Conference standings.

The Hawks couldn't have had a better start to the second half of the 2019-20 campaign. Trae Young is shooting his young squad into the win column more frequently as of late.

In their first game of the week, Atlanta squared off with a loaded Miami Heat team. Powered by Young's 50 points, the Hawks came up clutch in the fourth quarter, outscoring Miami by 12 to win the game by five points. It was quite the performance for this young group. Three days later, they picked up yet another win over the hospital Dallas Mavericks who ran without Luka Doncic or Kristaps Porzingis. Still, a 2-0 record coming out of the break and defeating a top-four team in the East is great for the Hawks' resume.

The NHL might be a competitor of the NBA in terms of viewership and fans, but game respects game. On Sunday night, the LA Kings honored Kobe with these awesome Laker-themed jerseys:


So cool. Props to the Kings for this one.

There is one poor waitress that works for the Blazers that can't catch a break this season. Earlier in the year, LeBron bumped into her and knocked her over. Now this week, NBA ref Mitchell Ervin backed into her while she had a MASSIVE tray of drinks:

Neither of these spills were her fault, yet there she is right in the thick of it. We're here for you girl!

We've seen a lot of NBA brothers in the league - the Lopez twins, Holiday brothers, the Antetokpumpos, and so on. But this week, we had Jonas Valanciunas' long lost twin sitting courtside for this game:


Ok, so it wasn't actually his long lost twin - it was Chiefs tight end Travis Kelce. It was great to have both of the look-alikes so close together at the Staples Center!