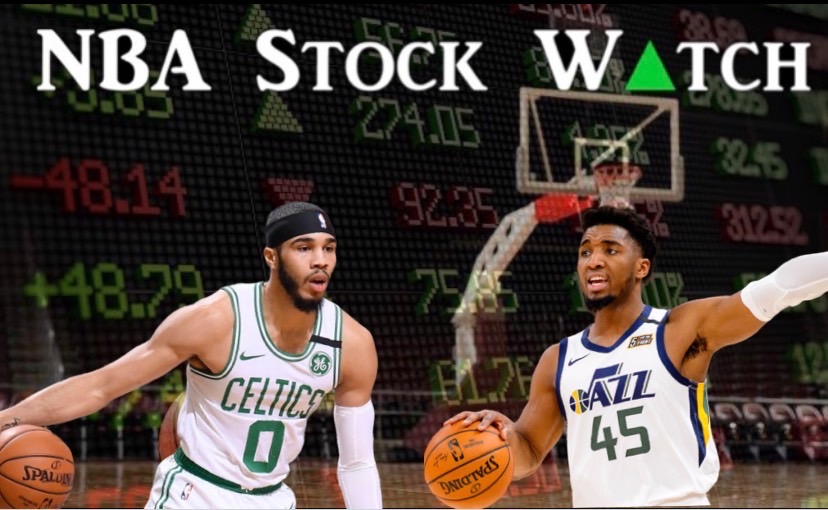 The NBA trade deadline last Thursday sent ripples across the league, with many household names on the move to new locations. Teams are now locking in their rosters with clear expectations for the rest of the year, whether they're optimistic or not. This week's Stock Watch explores the trending teams and players throughout a busy week of basketball.

I don't know if it was Kobe or his recent All-Star selection, but Tatum is playing some motivated basketball as of late. The 21-year-old has been powering Boston's offense, scoring 29.8 points on 50% field goal shooting and 53.8% three-point shooting.

Damian Lillard and Trae Young were the only two players who scored more than Tatum's 119 points this week. He made the most three-pointers in the league, and did so while converting on more than half of his attempts. Tatum's efficiency went beyond the scoring, as he also hauled in 7.5 rebounds, dished 3.8 assists, and also chipped in with a block and assist per game. He has been the best player recently on a Boston team that is on a seven-game winning streak, resulting in a no-doubt stock raise.

I don't know if Spida has ever seen his stock take a notable dip. After his past three games though, that's exactly what has happened.

Mitchell has been so great in his first few years of the season. In week 15, although he still got put up solid scoring numbers, his efficiency took a big hit. His scoring was down 4.7 points per game, mostly stemming from some poor shooting. The Jazz guard shot just 28% from downtown and 36.5% from the field overall. Those numbers were down by 8% and 9% from his season averages, respectively. Of the players who averaged at least 20 shots per night, D'Angelo Russell was the only other player to shoot as poorly as Mitchell. To make matters worse, the 23-year-old turned the ball over 3.7 times per game while averaging 4.7 assists. The Jazz should have their star scorer back to his normal ways sooner rather than later.

I could watch The Joker all day long. And no, I'm not talking about the movie.

Jokic has been phenomenal for the Nuggets, having a part of every aspect of the game while gracing the hardwood. This week, the big man posted 27.3pts, 14.3reb, 8.3ast, 1.7stl, and 2.0blks. He was the fourth-best rebounder and eighth-best playmaker in the league, while still averaging over 27 points. One of his highlights was an incredibly nonchalant go-ahead, fade-away jumper off of one leg to help Denver beat the Jazz. And, for what it's worth, the Joker posted the most fantasy points on the week!

Daryl Morey is a smart guy, but boy do I question his move to trade Clint Capela and run a 6'5" forward at center (more on this later!). After trading away their 6'10" big man averaging 13.9pts, 13.8rebs, and 1.8blocks, the Rockets have lost two games in a row. Shocker!

After starting the week with a win over Charlotte and a statement victory over the Lakers without a true center playing, the Rockets came crashing down in a hurry. They got blown out by the 21-32 Suns on Friday, losing by 36 points. Two days later, the Rockets were back in Houston but came up short after Bojan Bogdanovic hit an acrobatic buzzer-beater. Their offense has looked awfully mediocre lately, and their defense will have a tough time keeping up with opposing centers moving forward. I'm very bearish on these Rocket's future flight trajectory!

SacTown put together a great stretch of play through week 15 of the season. They went 3-0, performing well on both ends of the floor and positioning themselves closer to playoff contention.

Sacramento beat the Timberwolves, Heat, and Spurs to sweep their three games. They finished the week with a top-three offense and top-five defense, showcasing their overall strong play. A range of players have been making plays, from Buddy Hield and Harisson Barnes to De'Aaron Fox and Bogdan Bogdanović. The 21-31 Kings have a long way to go, but week 15 was a big step in the right direction for this young ambitious squad.

I will admit, I do like Miami's stock moving forward. With the additions of Andre Iguodala and Jae Crowder, the Heat are looking super versatile. However, that being said, they've still lost three straight games as we head into Week 16.

Miami opened the week with a massive 31-point beat-down of the Philadelphia 76ers. But hey, everyone is whooping the Sixers when they're on the road lately, so much value does that really hold? Following that triumph, the Heat cooled off quick. They since have lost three straight games, falling to the Clippers, Kings, and Trail Blazers all on the road. They had a double-digit average margin of defeat and, despite a strong offense, couldn't get stops on the defensive end. Miami will continue their brutal road trip in Golden State, Utah, and Atlanta before finally returning home - can they change the tide of their road trip after stumbling out of the gate?

As if Tik Tok needed any more validity! The social media app taking the millennial world by storm has also been infiltrating the NBA. For starters, the Greek Freak downloaded the app recently and has been posting a storm (much related to his girlfriend's pregnancy):

And perhaps my favorite videos of the week came from Shaq and his Tik Tok dances:

Shaq being addicted to Tik Tok is so wholesome and beneficial for my mental health pic.twitter.com/SOOB0wEI9a
— asma (@aintthatasma) February 6, 2020

Stock Down: Centers
As I already mentioned earlier, the Rockets traded away their centers and have committed to starting the 6'5" PJ Tucker at center moving forward. It's quite the bold strategy that had the internet rightfully buzzing:

This is going to be PJ Tucker matched up with the opposing teams center every night pic.twitter.com/Rca30iDcVy
— Ben Stinar (@BenStinar) February 5, 2020

Serge Ibaka wore a LEGENDARY scarf to the Raptors-Pacers game on Wednesday. Just take a look for yourself:

This man out here looking like he wore a full afghan blanket to a basketball game. Honestly, though, I can't blame him for rocking this thing considering those Toronto winters!