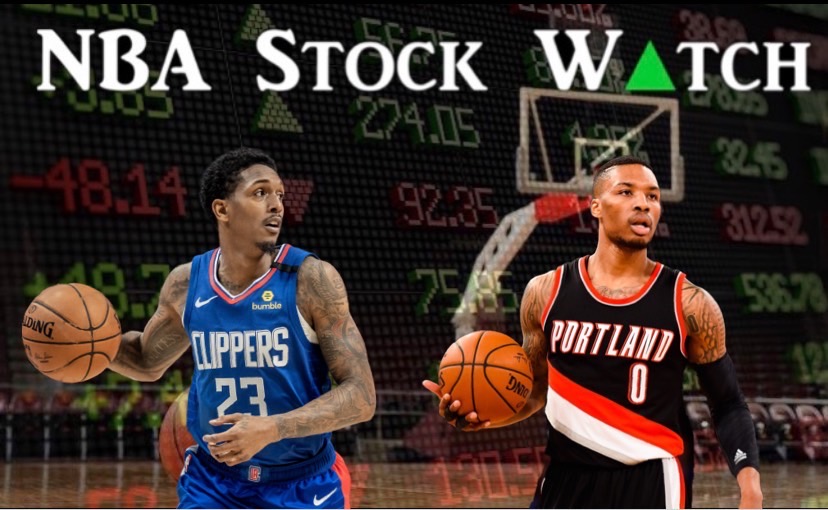 Now that the Super Bowl is over, the NBA takes center stage in the world of sports. Yet, as the season rolls into February, it means that All-Star weekend is a short two weeks away. Can you believe it's already here?

The Stock Watch yet again recaps the past week in basketball, a week that was filled with the continued mourning of an NBA legend, appreciation for one of the best player scoring streaks, and so much more.

I have a few unwritten rules for myself when writing this segment. One of those rules is that I don't ever use the same player or team on back-to-back weeks. For the first time in this column's history, I have broken that rule.

Lillard has been playing on another planet lately. He had 361 points and 77 assists over his last eight games. He is the 1st player in NBA history to average 45+ points and 10+ assists through 6 games. He became the 1st player in NBA history to make 6+ threes in 6 straight games. I could go on and on, but chances are you've already seen the level he's been playing at. He's made so many deep shots from near the logo, that teams are double-teaming him after he crosses half-court. Lillard is propelling himself into the thick of the MVP conversation as his stock is at an all-time high.

Sweet Lou had been on a tear until this past week. The Clippers guard may have averaged 19.5 points, but he did so on poor shooting and sloppy play.

Williams had one of the worst shooing percentages on the week, shooting 34.1% from the field and 11.1% from three through his pair of games. His six assists came at the expense of four turnovers per game - the eight most in the league. He was particularly bad Thursday night against the Kings, when he shot 7/22, turned the ball over six times, and ended the night as a -19 on the scoreboard. Considering Williams' career, I wouldn't expect his stock to slip for much longer.

Stop sleeping on Khris Middleton! One of the most underrated players in recent years just earned his second straight All-Star nod, and showed exactly why this week.

The versatile wingman averaged 33.3 points, 7.0 assists, and 6.7 boards for Milwaukee. He shot 61.5% from the field, 66.7% from beyond the arc, and 95.7% from the free-throw line - all stellar numbers for a perimeter player. He made two-thirds of his threes while attempting seven a game! No one else in the league even came close to matching that number, regardless of how many attempts they tried. This helped him finish the week third in scoring, 16th in playmaking, and with a rising stock.

It was a productive week for Brad Stevens and his Boston Celtics. In their three-game slate, they were matched up with two of the top foes in the East and one weaker Western Conference squad. Boston overcame a few obstacles to have a perfect week.

The Celts first traveled to sunny Miami Florida to take on the No. 3 seed (at the time) on Tuesday. The Heat were 21-2 on their home court and throwing out a full squad against a Celtics team that was without one of their newly-named All-Stars Jayson Tatum. Boston battled the whole game, opening up a first-quarter lead that they never really gave up, ultimately beating the Heat by an eight-point margin. They cruised by a depleted Warriors team on Thursday, before then hosting Joel Embiid and the 76ers on Saturday. Going into the game, the Sixers were 3-0 on the season and facing a Celtics team that didn't have their star point guard in Kemba Walker. Despite this, Boston dominated on both ends of the floor and beat the Sixers handily, 116-95. The Celts had the number one defensive efficiency in the league and, despite playing two strong opponents, finished with a 14.7 net rating.

If there is anything I've learned about the Jazz this season, it's that they're quite inconsistent. After making an appearance on the Stock Up as recently as last week, Utah is now at the other end of the spectrum after a tough week.

The Jazz had four games since last Monday, and they lost every one of them. They were challenged with a tougher slate of opponents, but for a team with deep playoff aspirations, they should be able to capture at least one win. The week started with a home game against the Rockets, who suited up without James Harden, Russell Westbrook, or Clint Capela - AKA their whole team - and still got smoked. They then hit the road to San Antonio, Denver, and Portland, failing to defeat any of them and giving up an average of 119 points per game. Their defense pulled a 180, somehow dropping from the 2nd best in the league last week all the way down to the league-worst defense this week. Utah will not have much time to mourn their losses, as they have three of the same opponents back on their upcoming schedule.

The Lillard show lives on! Portland continues to storm back into the Western Conference playoff chase, winning four-straight and climbing up to the nine seed.

The Blazers had a perfect week against three teams, all of which are near the top of the West. The Rockets, Lakers, and Jazz all saw the red-hot Damian Lillard light them up and nearly hand them losses singlehandedly. The point guard led a top-five offense on the week, registering a 121.3 offensive rating despite playing two of the best defenses in the NBA. The supporting cast, including CJ McCollum and Hassan Whiteside, have been complimenting Lillard beautifully and have found their own ways to contribute to the Portland club. No team in the league will be happy to see the Trail Blazers on their schedule after their unstoppable recent play.

Any player of NBA2k will get this reference! For years, gamers who play the 2k video game have been jamming the X-button during games to get to the actual gameplay as quickly as possible. This has come at the expense of a whole lot of in-game interviews with NBA analyst David Aldridge...


Poor guy. This one is for you, David!

Shooting a crumpled-up piece of paper into a trash can will never be the same. Kobe Bryant transcended basketball to such a degree that people merely throwing away a piece of trash or dirty laundry into a hamper would shout "Kobe!"

After last weekend, people all around the world showed off their best paper-tosses in honor of the silly tradition that now holds new meaning to everyone:


High School kids across America were shooting paper balls into trash bins at 8:24am this morning while yelling "Kobe".


It was even better when dozens gathered outside of Staples Center to shoot crumpled up paper at a can:


Someone put a small trashcan at Kobe and GiGi's memorial so people could throw paper and say "Kobe." 💔 #MambaForever pic.twitter.com/VJTVnIz346
— Complex (@Complex) January 28, 2020

It was reported this week that 94 of the 450 players on NBA teams are currently injured. That translates to 21% or one in every five players.

I'm not sure what it means. Maybe the NBA will finally start to seriously consider shortening the season. Maybe teams will apply even more load management moving forward. Maybe it's just a series of overlapping unluckiness. Either way, let's hope these players get back to full health as soon as possible!

PS: Shout-out to Jack B for catching this one - if anyone ever sees something that you think might be worthy of an appearance on the Bonus Stock Watch, shoot me a DM and let me know!