Unprecedented Dominance on display these days in Brew City

On their way to glory, the Splash Brothers etal managed to misfire on 3,670 of their field-goal attempts and to commit 1,245 Turnovers … also to extend a possession by means of an offensive rebound on 816 occasions

By subtracting the O-boards from the sum of the missed shots and TO’s, Coach Kerr’s crew would appear to have been “stopped” 4,099 times in 82 games.

That may seem like a lot of failure – until you realize that their opponents (via the same calculation) squandered 4,390 of their possessions … that’s 3.56 more “empty possessions” per game for the other guys, and thus 3.56 more conversions per game for GSW.

Way back when in 1996 as Jordan and his Bulls were steamrolling to a 72-win season, the champs endured but 3,527 empty possessions and held a +5.43 per-game advantage in conversions. [Those Bulls actually compiled more second shots (1,247) than TO's (1,175) ... not sure if that achievement has ever been matched. Where's Justin when I need his help??]

The 67-win Shaq-and-Kobe Lakers launched a three-peat in 2000 by out-playing their opposition by 5.49 possessions-per-game during the season … the Doc-Moses 1983 Sixers had a season score of +4.73, while the ’86 Celtics bested that with a +4.89 edge in the Conversion Count. 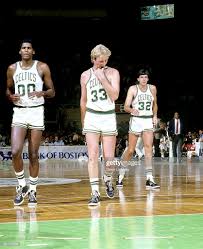 And the Durant-enhanced Warriors of 2016-17 out-converted their foes by a league-best 4.76 per game.

Last season’s NBA leader in this measurement of a game’s “Flow” – with a score of +4.13 – was the Milwaukee Bucks.

But Coach Mike Budenholzer’s fast-paced Deer have upped the ante this go-round.

The most stunning number of all, though, is the Bucks’ astounding 7.82 advantage in per-game conversions. Milwaukee ranks No. 1 in Pace of Play, Points per game, FG defense and Defensive Rebounding while standing No. 2 in FG% and Road victories.

Their Achilles Heel involves “Striping” – the Bucks allow opponents 9.54 Stripes per game (worst in the NBA) while missing 6.70 Free Throws per game (second-worst in the league).

The Echo of History

The NBA began distinguishing Offensive and Defensive Rebounds with the 1973-74 season, so this method of measurement unfortunately cannot be applied to a Russell or Chamberlain team.

But in that “inaugural” season, Kareem Abdul Jabbar’s Milwaukee Bucks recorded a hefty +4.48 edge in the Conversion Count on their way to a league-best 59 wins.

Those Larry Costello-coached Bucks lost the NBA Finals in seven games to Tommy Heinsohn’s Celtics, whose seasonal Conversion Count was a more modest +2.40.

I felt a smile take over my face when I ran down the "credit" for the Heinsohn-Cowens picture above. The dude was a fixture at the old Garden, as familiar as Howie McHugh, the parquet floor and the cats who swept it during the time-outs.

If you ever attended a Celts game back in the day, you couldn't miss the Globe's Danny G along the baseline, camera and stout, wooden stool at the ready -- I've often wondered if it was DG's stool that Sam Jones picked up in self-defense when Wilt came toward him one night in anger.

Mr. G's stool, from which he clicked the shots that would accompany Bob Ryan's artful game stories, had to be well-constructed and maintained cuz ol' Dan was a big man -- and that's putting it politely.