Kevin Garnett says he wanted to play with Kobe, but his calls weren't returned 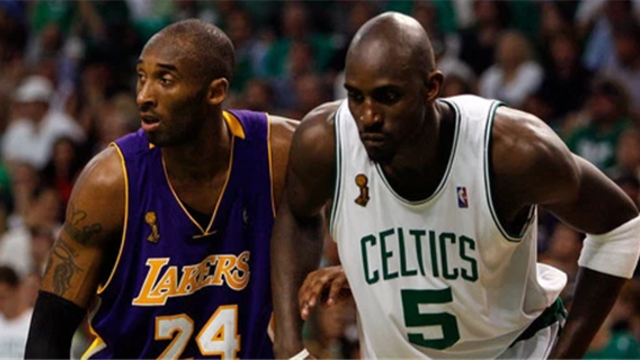 Kevin Garnett shared a story on Stephen Jackson's and Matt Barnes' "All The Smoke" podcast this week, which recalls how he could of ended up a Laker instead of a Celtic.

I’m just being honest with everybody. I wanted to link with Kobe.

Kobe and I had a different connect. When Kobe-Shaq went on their little thing, a lot of people went with Shaq. A lot of people didn’t even f— with Kob. You know, Kob, whatever. One of the very few to just stay with him. I was a neutral guy, anyway. I show everybody love.

I tried to link with him, and I couldn’t get him on the line.

Garnett was working out at the time with Tyronn Lue, who was close with Bryant and encouraged Garnett to call back. Garnett did, but Bryant still didn’t return the call.


Of course another major obstacle was that then Timberwolves general manager Kevin McHale was the one that was going to make the final call. Not KG or Kobe or Ainge. And McHale had shown in the past he wasn't a fan oof helping out the Lakers. He famously turned down a Tom Gugliotta for Eddie Jones trade and instead let Googs walk in free agency. It was McHale's job to get the best deal for the Wolves, whether that was with the Suns, Lakers or Celtics.

So even if Kobe returned one of KG's calls, Garnett could have still ended up on the Celtics. The Lakers were offering Andrew Bynum and Lamar Odom at the time. The Celtics offer of Al Jefferson, Gerald Green, and multiple picks was arguably better.

As we all know, KG was traded to the Celtics and immediately changed the culture in Boston. He won a ring his first season here and if not for injuries (to himself the following season and Perk the season after that) he could of ended up with two or three rings.

The Lakers on the other hand would have undoubtedly been great with a Kobe/KG duo, but they ended up trading for Pau Gasol without having to include Bynum or Odom. KG was obviously better than Gasol, but was he better than Gasol, Bynum and Odom all together? We will never know. What we do know is KG ended up a Celtic and it was the perfect landing spot for both him and Boston.

Garnett also had very positive things to say about Ainge's pitch to him (if you recall the Celtics didn't want to trade for KG just to see him walk in a year, so they had to convince him on a long term contract prior to the trade):

Danny Ainge flew in, and he just got right to it and showed the vision, the vision he was seeing. You ever have somebody talk to you and as they’re talking to you, you can see what they’re seeing, so much that you’re not even looking at them no more but you see it? That’s how he was painting it. And he was a Picasso. And this is Danny Ainge’s greatness, in him being able to lure you in, his charming ass. You know what I’m saying? I didn’t even know he was finessing me.


Garnett also claims he convinced the Celtics not to include Rajon Rondo, who was originally part of the package, in the trade to the Wolves. To say that was huge would be quite an understatement. Pretty sure the Celtics don't have the same success with Sebastian Telfair running the point than they did with Rondo. We'll just leave it at that.

Garnett will be entering the Hall of Fame this year along with Bryant and Tim Duncan. KG also will be getting his number retired next season by the Boston Celtics.