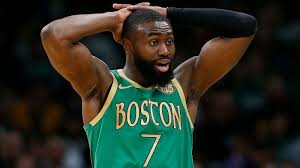 The Garden crowd reached a crescendo on Wednesday night when the clock struck Tacko Time for the 6th time this year. That crescendo, however, turned quickly to hushed concern as they watched Jaylen Brown, one of the NBA’s brightest young stars, hobble off the court with yet another tweak of the ankle. This was NOT how Jaylen’s bobblehead night was supposed to end.


Coach Stevens hopes Jaylen Brown will be back "sooner rather than later." He left the game after tweaking his right ankle pic.twitter.com/yZI4k0u45e
— Celtics on NBC Sports Boston (@NBCSCeltics) February 6, 2020

That concern grew a little when it was announced he’d miss the contest against the relatively punchless Atlanta Hawks on Feb 7th. With that decision decidedly more precautionary than not, Celtics fans breathed a collective sigh of relief when it was announced that Brown would suit up for a Sunday matinee in Oklahoma City.

Jaylen Brown was really frustrated about his ankle situation. Said that after he re-rolled his right ankle, he was overcompensating and rolled his left one. He limped out of the locker room after the game.
"I don't know what side to limp on right now."
— Adam Himmelsbach (@AdamHimmelsbach) February 10, 2020

Jaylen Brown, to the casual observer, is having a good season. To those of us who watch the Celtics night in and night out, however, his value cannot be simply measured through an unceremonious read through of his stat line. He belongs in Chicago for the All-Star game this weekend, and his omission from the ASG player pool is a glaring oversight.
That being said, it’s also a blessing in disguise. Even though it seems like he’ll be back tomorrow against the Rockets...

#NEBHInjuryReport Jaylen Brown (ankle) did not practice today, but will most likely play tomorrow vs. Houston according to Brad Stevens.
— Boston Celtics (@celtics) February 10, 2020

...I’d sit him through the All-Star break. There’s something about the quote “I don’t know what side to limp on right now” that’s particularly alarming to me. This Celtics team just ripped off seven wins in a row and nine of their last ten. I’m no doctor, but having Jaylen healthy down the stretch is well worth the cost of giving him an extended break. With Kemba Walker working his way back to peak fitness, let Jaylen put his feet up until 2/21.

Jaylen Brown says he is playing tomorrow in Houston:

Jaylen, for his part, doesn't buy it. He's more focused on beating the Rockets and Clippers. His quotes, although a little unnerving, are the epitome of what it means to be a leader. If FCHWPO says he plays, he plays.