The Boston Celtics snapped their seven game winning streak with a 116-105 loss to the Houston Rockets. The Celtics suffered from some sloppy play (18 turnovers), some not so great shooting (42 percent), and some tough officiating on Houston's star players. It' tough to come back on the road against a very good team with all of those circumstances working against you. 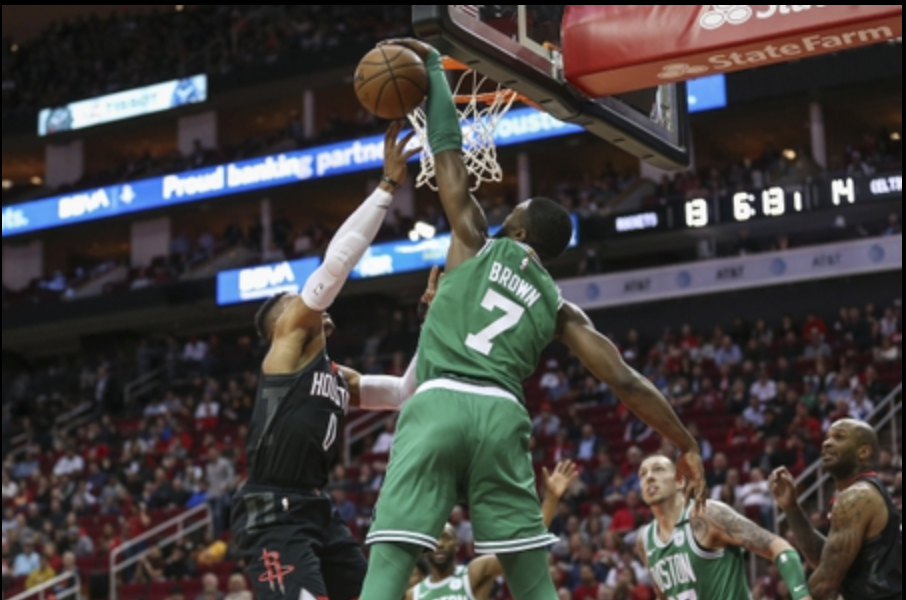 As has been the national story since last week's trade deadline, the Celtics were matching up against the new-look Rockets. Houston sported a starting lineup with PJ Tucker at center, who stands a whopping 6'5". Considering Boston's five best players are all wings and guards, it was going to set up an interesting matchup of small ball lineups.

Defense was optional for both teams early on. Kemba Walker (5) and Jaylen Brown (5) combined for 10 of the team's first 14 points. It was a great sign for Brown, who came into this game with some nagging ankle injuries sustained over the past few games. Houston has a number of good perimeter defenders, but for a team like the Celtics who like to get into the paint often, the lack of a rim protector was like a runway to the rim.

This could be a tough game for Kanter to defend in with all of Houston’s shooting and Harden. And his post-ups haven’t gone well so far.

The Celtics got off to a hot start, but Houston answered with a 10-0 run to take a 6-point lead. Many of the issues, and the invigorated offense by the Rockets, came when Enes Kanter entered the game. The slow-footed post bully has certainly been a pleasant surprise at times this season, and has even been a huge factor in some wins, but in a matchup against a team that can have five players around the three-point line, his defensive liabilities can be fatal. Even when Kanter tried to punish the smaller Tucker in the post, Tucker baited him into an offensive foul and then forced an ugly hook shot. For this Celtics team, it's probably a better idea to matchup skill with skill.

Celtics started the game 3 for 3 but went 4 for 18 over the rest of the first quarter.

After allowing a Houston run to close the first quarter, and going cold on offense, the Celtics came out charging in the second. Jayson Tatum, although shooting just 2-7 up until this point, had his fingerprints all over the Boston run. He had three points, two assists, and a few big rebounds to get the team out in transition. It's a sign of his maturity as a player to be able to impact the game when his shot isn't falling.

After taking the lead on the back of a 10-4 run, Houston hit back with an 8-0 run of their own to regain the lead. The Celtics struggled on offense when they relied too heavily on their jump shots. They had much more success attacking the rim and getting to the free throw line. As was the case in the first quarter, the Rockets were able to string together a run when Boston's shots weren't falling from the perimeter.

But almost as if the Celtics heard me writing the previous sentence, Walker and Co. went on an 8-0 run to tie the game 43-43. Walker knocked down a midrange jumper and then three free throws, and then Gordon Hayward knocked down a corner three off of a great transition feed from Marcus Smart. After a botched(?) Walker full court heave turned into a dunk for Tatum, the Celtics took a 49-47 lead into the halftime break.

Most unstoppable play of all time pic.twitter.com/8pCUBg5qYj

What was supposed to be a high-flying offensive showcase turned into a rock fight in the first half. Although there were multiple runs from both teams and plenty of momentum changes, neither team shot over 41 percent from the floor, and the two teams combined for 17 turnovers.

Boston came out of the locker room not ready to play, and Russell Westbrook and the Rockets made them pay for it. The Celtics were forcing everything, which resulted in a number of ugly turnovers. On the other end, Westbrook led Houston on a 10-1 run to open the third quarter.

James Harden scored 19 straight points in the third quarter to help the Rockets build a 11-point lead. Tatum continued to struggle from the field, and there weren't enough shots falling to keep up. Hayward was able to get things going on the offensive end a bit, but it wasn't enough to keep things close.

Trying to decide whether the Celtics’ bigger issue has been their inability to slow down Harden or just their offense in general.

The Celtics were able to cut the lead down to seven going into the fourth quarter thanks in large part to 11 third quarter points from Hayward. Harden and Westbrook lived at the line in the third as well, which made it very difficult for the Celtics to make a lot of headway in the comeback attempt.

After a Westbrook turnover and missed shot, Tatum and Brown scored back-to-back buckets to cut the lead down to three in just under a minute of fourth quarter action. With Harden on the bench and Westbrook being his typical self and wrecking everything, this was going to be the time for the Celtics to turn the momentum.

When Harden came back in the game, though, the Rockets were able to push the lead back out to seven. Prior to that, the Celtics had cut the lead down to just two. But on three consecutive possessions, Harden picked up his third, fourth, and fifth foul, making him a defensive liability. A Daniel Theis and-1 layup once again made it a one-possession game.

Harden hurt himself on that last Tatum collision.
Since then he's committed an offensive foul and had to foul Tatum again because he couldn't stay in front. Now he has 5.

Westbrook continued to put the Celtics on their heels, but a Brown corner three, Walker steal off of Harden, and a Tatum breakaway dunk cut the lead back down to just two, and sent a wave of energy through Boston's lineup.

Despite the five quick points, the Rockets answered back with five free throws after Harden bitched and moaned his way to the free throw line.

Celtics are doing a great job attacking and drawing contact but an awful job of not biting and committing silly fouls on jumpers on the other end.

As if the game slipping away wasn't enough, Brown seemed to injure his calf while battling for a rebound.

Jaylen is staying on the bench. At this point it'd probably be careless of the Celtics to not have the guy sit out one more game. He's clearly not right health-wise.

With Brown on the bench, the Rockets extended their lead and ultimately put the game away. The Celtics will be back in action on Thursday night when they host the Las Angeles Clippers.