The Philadelphia 76ers had no answers to Brad Stevens’ squad tonight. Jaylen Brown, Jayson Tatum, combined for 57 points and Daniel Theis and company step up on D to stifle Philly.

Coming in 3-0 against the Celtics this season and with health on their side, the unpredictable Philadelphia 76ers visited TD Garden looking to get back in the win column themselves and swap places with the Indiana Pacers for the 5 seed in the East. The Celtics were looking to extend their win streak to 3 and keep pace with the 3-seed Miami Heat, who already won earlier today.

Pregame: Kemba and Kanter out. While Kemba Walker, who played 82 games for the Hornets last season, was ruled out with a nagging knee issue, Marcus Smart got the start at the 1. Boston, already in big man trouble, also headed into the daunting matchup against Joel Embiid and company without Enes Kanter, leading to the activation of Tacko Fall. Coming into today, the Celtics’ size issues this season had been highlighted against the 76ers, getting outrebounded by an average of 14 per game in their three matchups.


Tacko Fall is in Boston and working out pregame. As he warms up, a Celtics assistant coach is giving him Embiid-specific pointers.
— Tom Westerholm (@Tom_NBA) February 1, 2020


First quarter: Jay Train causes trauma in transition for Philly. With no Kemba to run the offense, it was clear Jaylen Brown and all-star Jayson Tatum had to show up big to have a chance tonight. With everybody staying active on both ends of the ball, Brown and Tatum benefited in transition to help the Celtics get off to a 22-8 start. Despite Tatum picking up 2 personal fouls in the first few minutes, he rewarded his head coach for leaving him in the game, staying aggressive on jump shots and drives and energizing the Celtics to a 13-point lead heading into the second quarter. JT and JB finished the first quarter with 18 of the Celtics’ 32 first quarter points and 30 of the Celtics’ 59 first half points.


Turnovers told the story. In a scrappy game with ugly 3-point shooting from both teams, the Celtics needed to get creative to stop the Embiid-led inside game of the 76ers. Hard doubles and quick hands on the Philly bigs (Embiid and Horford) forced the 76ers into turnovers that accounted for the difference throughout the game. The Celtics, who rank top 10 in the NBA in fewest turnovers per game, committed only 3 turnovers in the first game, while forcing 8 by the 76ers, four of which committed by Joel Embiid.

Daniel Theis was splendid as well as Embiid’s primary defender, disrupting the all-star’s positioning on the post-up and preventing passes inside all game long. Theis' hard work will not be reflected in the Celtics end of the scorecard but Embiid finished his night with an abysmal 1/11 line from the field and only 11 points and 5 rebounds. 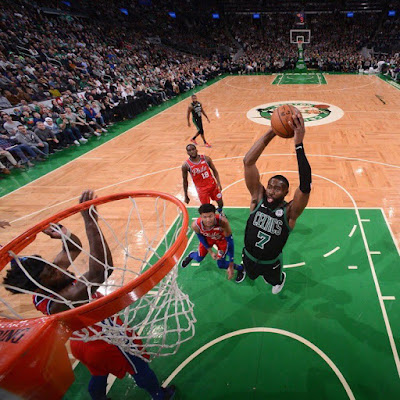 Third quarter: Balanced attack creates separation. Highlight reels have been a hotspot for the Celtics this season and today, the 76ers took turns at getting victimized. From a Marcus Smart fake-and-finish on Al Horford to some Jaylen Brown hot sauce, the 76ers would have been better off in the third quarter had they not showed up.


Fourth quarter: Celtics take care of matters after a short scare by the visitors. After a quick scoring spree to begin the fourth quarter, Brad Stevens called a timeout with 9 minutes left in the ballgame. It was a matter of a few minutes of game clock until the Celtics lead ballooned to 20 points again and both head coaches called it a night. The loudest cheer from the Garden came with about 2 minutes to go as Tacko Fall checked into the game. He committed a foul, much to the chagrin of the crowd, but scored a bucket just to stay in shape.


Unsung heroes: Semi Ojeleye & Grant Williams. With how well Marcus Smart, Jaylen Brown, and Jayson Tatum played on offense today, it's easy to lose the strong play off the bench in the mix of the blowout hype. Remember when I said the 76ers used the rebounding advantage to go 3-0 against us this season? While Semi's 11 points and Grant's 5 points may not jump out of the box score as elite, their hustle on the loose balls and misses shook the 76ers into frustration. Semi and Grant combined for 8 rebounds (4 offensive). Brad Stevens' work getting Grant minutes with Embiid on the bench was also a less-discussed opening move to a chess game between the two head coaches. It's clear who won the battle tonight. Brad Wanamaker also chipped in with 15 points off the bench.

The Celtics will make a quick stop in Atlanta on Monday, facing a 14th place team that shouldn’t be slept on. The Hawks, led by all-star Trae Young, already gave the Celtics a thriller at the Garden in early January and recently beat the 76ers. The Celtics will have to pick up the road win without Kemba. For now, Boston will enter Super Bowl Sunday watching the standings instead of the Patriots as they are tied for third in the conference with the Miami Heat. Philadelphia will stay in 6th and move to 9-17 on the road.