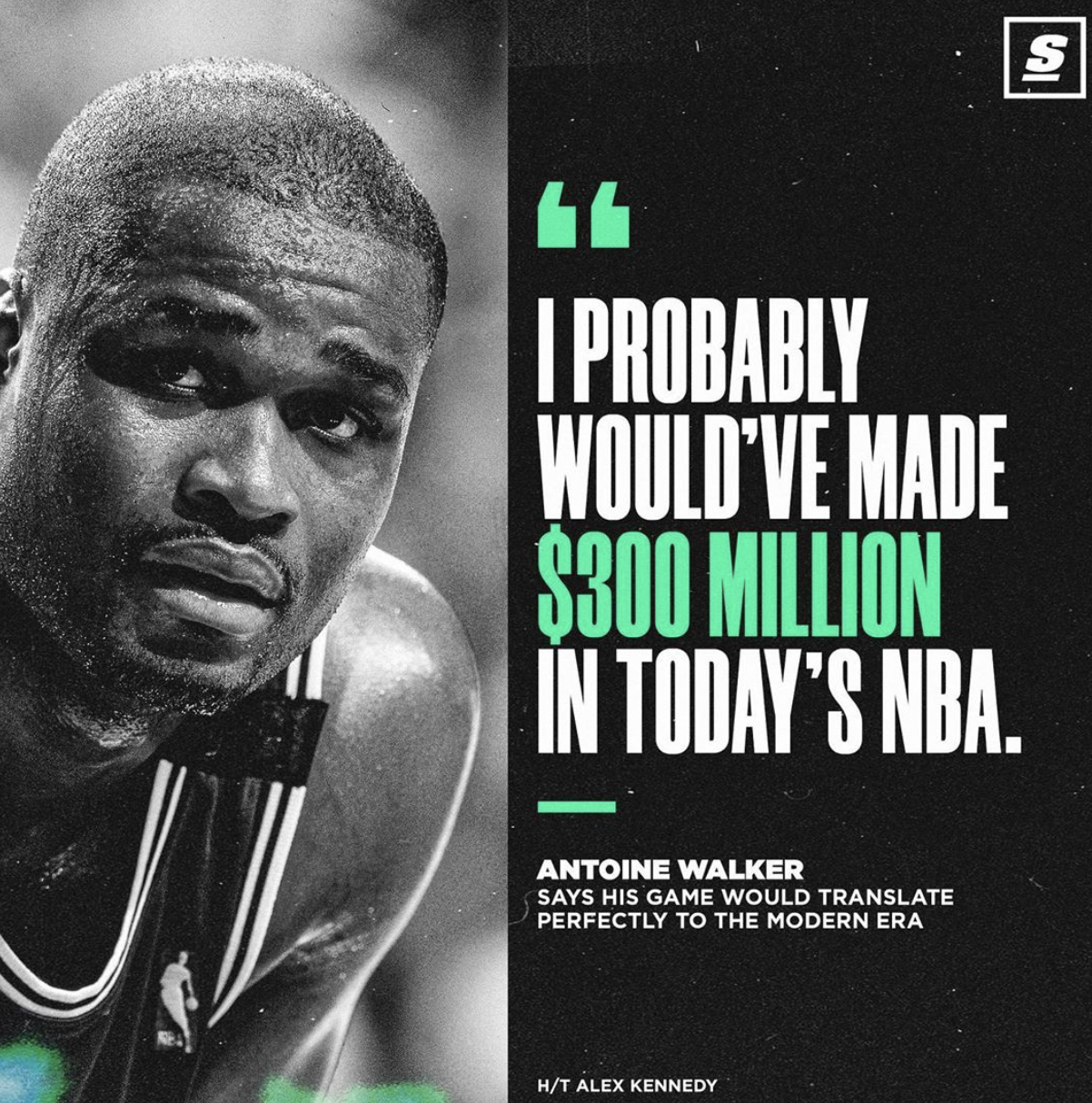 Antoine Walker in his recent interview with Hoopshype was asked how his game would translate into today's NBA:

You were ahead of your time with your three-point shooting. People used to criticize your shot selection because you attempted a lot of threes, but with how the game has evolved, clearly you were onto something. Do you feel vindicated?

And Antoine's answer was pretty much on the money (no pun intended, but slightly humorous after the fact:

"Oh, without question! I probably would’ve made $300 million in today’s NBA, if I could’ve played in this day and age! But I think it shows the skill level of big men. We’re seeing that big guys can do some of the things that small guys can do. It was a tough time for me when I was doing it; I used to get ripped for shooting so many threes. But I really give Jim O’Brien a lot of credit. When he took over for Rick Pitino, he’s the one who instilled that confidence in me as a shooter. He’d say, “Anytime you get an opportunity to shoot, shoot it!”"

Antoine also compared his game to Draymond Green while admitting that Green is a better defender, which makes the comp seem fair. I remember when Rick Pitino challenged Antoine to get in. better shape. He basically told him if he was going to be a small forward he'd have to get cut like Scottie Pippen. And if he was going to be a power forward he'd have to get jacked up like Karl Malone. Of course, Antoine never really changed his body and played both positions the rest of his career.

In today's NBA, Walker would be a 4 or a small ball 5. When comparing generations and 3 point shooting, I tend to assume that players of the past would shoot a higher percentage if they played in the current NBA due to the more lax defense and that they would have practicing way more 3's during the summer, at practices, at shoot-arounds, etc. So while Antoine's best 3-point shooting seasons were still just under 37%, it's not hard to predict him having a higher percentage in today's NBA. Conversely if Draymond Green was drafted in the mod 1990's, I'd assume he would have worked more on his post game at that time and not shoot as well from 3.


Regarding the $300 million number, 'Toine would have to averaged $25 million if he played twelve seasons in this era (like he did in his career). One could also surmise he would have lasted past the age of 31 in today's game, so maybe that 25 number could have been lower. Obviously he'd start out on a rookie scale contract, so at some point he'd have to be making max or near max dollars. He got those deals during his day, so I don't doubt he'd get them in today's NBA. This of course assumes that with more practice and more lax defense his 3-point percentage would be higher. He had a good stroke so that's a fair assumption.

Besides the 3, Walker was a point forward during his time, so in today's NBA you could have him handle the ball and initiate the offense, but also he'd be big enough to guard opposing team's centers. After writing this post, I'm starting to thing Antoine might be short changing himself.

What do you think?