Welcome back to another edition of the NBA Stock Watch! With playoff football, college bowl games, and so much else going on, you may have missed some of the juicy drama or crazy trends from the NBA this week. For example, there were two different sets of players feuding with each other on social media, there were two centers who had stellar weeks, and there is an UNO meme that has made it's way to the NBA world.

Without further ado, let's get to the 12th Stock Watch of the year.

The Joker is back to his trickery for the Denver Nuggets. Jokic, who averaged 29.8 points, 10.3 rebounds, 5.8 assists on his way to an MVP week, was effective from all areas of the floor and helped the Nuggets to a 3-1 stretch.

Let's start with the scoring. The Denver center nearly averaged 30 points while shooting 59.2% from the field and 56.5% from three on 5.8 attempts per game. There wasn't any other player in the association who shot that well while averaging more than three treys per game. That would be impressive for a guard or wing - it's even crazier that he's a stretch five. On the playmaking side of things, Jokic was also productive. There were only two other athletes who assisted as many shots and turned the ball over as infrequently as the Joker, who posted a low 1.5 turnovers per game. No matter how you look at it, Jokic is playing at a very high level and has his stock on the rise.

This might be one of the quickest turnarounds in Stock Watch history. You might remember that a short two weeks ago, Brown was featured as a Stock Up after winning Eastern Conference Player of the Week and posting some awesome numbers for the Celtics. Well, the wing player has struggled since then.

In Brown's four games in Week 12, he posted 14.5 points on 28.6% shooting and averaged twice as many turnovers (2.8) as assists (1.3). He was truly one of the most inefficient players in the league over this stretch - RJ Barrett was the only player who averaged as many turnovers and fewer assists, and not a single player took as many shots as Brown at such a low percentage. His shooting beyond the arc was hardly any better, as the 23-year-old converted on just 29.2% of his threes. There were a lot of things wrong with the Celtics this week, and Brown was certainly one of them.

Have yourself a week, Tristan Thompson! The Cavs big man is seeing a lot of action on the floor, and he is taking the absolute most from it.

Thompson, in his ninth season, was stellar on the boards all week long. He hauled in 14rpg, sixth-most in the league, and was especially effective at grabbing his own team's misses, averaging 6.7 offensive rebounds. On Thursday, he poured in a career-high 35 points on 15-20 shooting, helping him average a very respectable 20.3 points per game. That's more than double his career average! To make it even better, the 28-year-old sprinkled in three assists and two blocks per game (6th best in the league). I'm not sure if I've ever seen Thompson's value any higher than it is now.

The Lakers are on yet another big win streak. Having won eight straight games and putting together a perfect 3-0 week, LA continues to solidify their title contention.

Week 12 opened up with a big-market matchup between the Lakers and Knicks. As expected, LeBron James and Anthony Davis led LA to an easy 30-point win. Then on the road in Dallas, they put together one of their more impressive victories of the season. Without the Brow suited up, the Lakers still managed to control Luka Doncic and have a wire-to-wire victory over the Mavericks. Finally, on Saturday, LA showed that they can still hoop without their top stars. The team traveled to Oklahoma City without LeBron or Davis to face a surging Thunder team. Vegas actually pegged the Lakers a pretty notable underdog for the matchup. Yet, Rajon Rondo and the role players easily defeated the Thunder. Overall, LA had the best net rating in the league (+20.5) and finished in the top five on both the offensive and defensive ends.

The Pistons are waving the white flag. After years or borderline contention, finishing countless seasons without playoff births or as low playoff seeds, Detroit seems to be ready to move on with their roster. The dominos have begun to fall this week, starting with the news that Blake Griffin would undergo surgery and likely miss the rest of the year. Not only did they lose their best player, but they also lost two of their three games of the week.

Motor City barely got by the Cavs to start the week, winning 115-113. In the same matchup two nights later, though, they failed to defeat the Cavaliers, losing by three on their home court. And then on Saturday, the Pistons lost a second-straight home game to a sub-.500 team when they saw the Bulls win by nine. The 14-26 Pistons are determined to trade star big man Andre Drummond and have reportedly put their entire roster on the trade block. Detroit's stock crash will only get worse moving forward.

The Jazz continue to be a rock-solid stock in the NBA. With all of the star power in the Western Conference, Utah is still sitting in the fourth seed and remain just half a game out of second place. Along with the Lakers, they are riding the longest win-streak in the league at eight straight.

It was a busy slate for the Jazz, who played a pair of home games and a pair of road games since last Monday. In those games, as you might be able to infer from their win-streak, Utah went 4-0 and posted a top-three net rating with an average win margin of 15.3. Donovan Mitchell and his supporting cast are especially rolling offensively, posting 121.7 points per game and the league's most efficient offense of the week.

Us NBA fans were blessed with not one but two feuds between NBA players this week. The first was more of a physical altercation between TJ Warren and Jimmy Butler that turned into verbal and social media beef:


The on-court drama ended with Butler elbowing Warren, Warren clapping in his face and getting a tech, Butler blowing him kisses, and Warren flippin' the bird:


It didn't end there. Butler roasted Warren in the postgame interview and then posted a social media post of the Heat's next matchup with the Pacers.

The second feud was between Kenrick Perkins and former teammate Kevin Durant:


Perk went there. The only thing this conversation is missing is a snake emoji. pic.twitter.com/aIw9mWbAjR
— Kyle Boone (@Kyle__Boone) January 10, 2020


Perk is a national treasure. Love seeing this beef.

Stock Down: The Bachelor

The hit drama TV show is back, but don't remind Gordon Hayward of that! The Celtics forward admitted he often gets sucked in, but he refuses to watch the "reality" show:


That definitely sounds like something a guy who watches the Bachelor would say...

We're just two weeks into 2020 and we're already onto our second meme of the year! The Uno card meme is sweeping the country, and NBA players are starting to be the target of the joke. 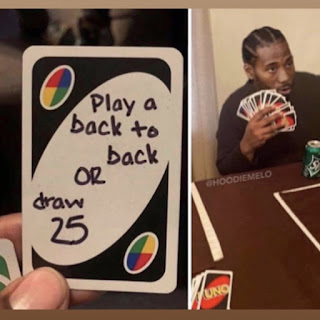 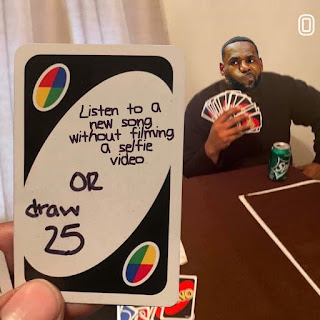 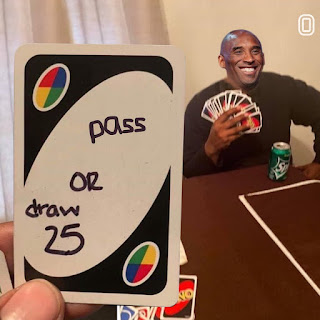 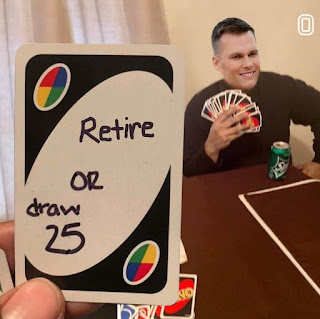