Celtics bounce back with impressive 109-101 win over Heat

The Boston Celtics outlasted the Miami Heat 109-101 in a battle of two Eastern Conference elites. After having lost to the Pelicans on Sunday in a game that was far from the first thing on the players' minds, Boston bounced back in a big way against a top-notch team who they were looking up at in the standings. The C's used a hot start and some big performances from Jaylen Brown and Gordon Hayward to overcome a resilient Heat team and handing them just their third home loss of the season. 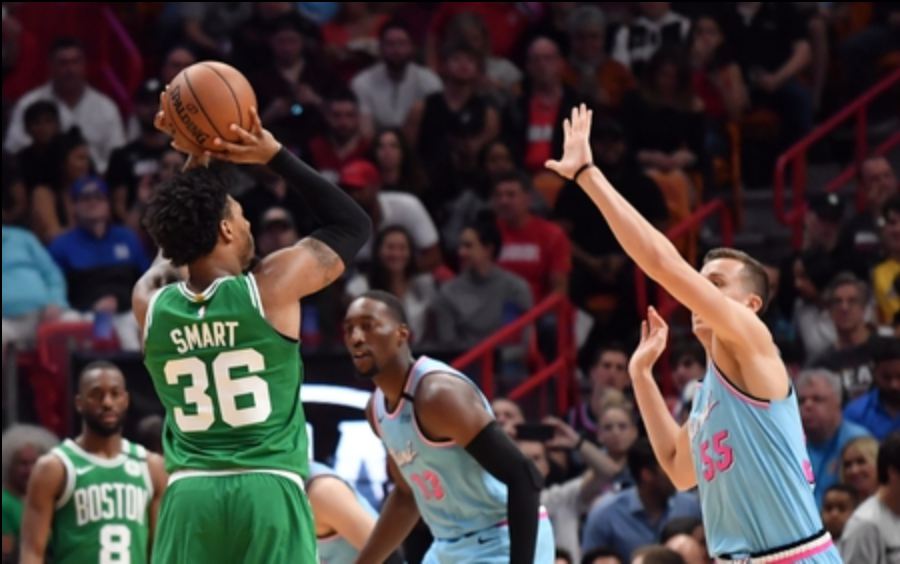 The Celtics got off to an incredibly fast start. Brown and Marcus Smart both knocked down threes, and the defense was active. Boston got out to an 8-0 lead in just 1:09 minutes. Over the past few weeks, with the exception of the blowout wins against Los Angeles and Memphis, the C's have been suffering from slow starts that cost them a number of games. Tonight, though, was a nice change of pace.

With Jayson Tatum (groin) missing his third straight game, Boston was going to need somebody to pick up the scoring slack. In the first quarter, both Hayward and Brown took on that charge. Brown had 11 first quarter points, to go along with three assists. The assists were even more impressive than the scoring, considering they came in situations where, in prior years, he would have definitely forced up a shot. Brown started 4-5 from the field, including 3-3 from three point range.

Just a monster start from Jaylen Brown. 11 points on 4-for-4 shooting, three 3-pointers, a block and three assists. Doing it all.

Hayward, on the other hand, was super aggressive on offense. He was driving to the hole and punishing smaller defenders in the post. He looked as aggressive as he has all season, and it was exactly what the Celtics needed.

Unfortunately for the Celtics, the Heat got their feet under them pretty quickly after the slow start. Boston was able to maintain their lead throughout a majority of the first quarter, but once the Miami bench got into the game, they changed the momentum. Miami has been lauded for their bench all season, and tonight was no different. Goran Dragic, Derrick Jones Jr., and the corpse of Dion Waiters had combined for 20 halfway through the second quarter. The Heat started the second quarter on a 13-4 run to take their first lead of the game, thanks in large part to their reserves.

Celtics can't get anything going against this zone.

What also allowed the Heat to make a comeback was their switch to zone defense. With Brown and Hayward on the bench, the Celtics didn't have enough scoring to attack the zone from the outside. Miami uses the zone defense as much as almost any other team in the league, and they used it effectively, not only to limit Boston's offense, but to maximize the effectiveness of their bench unit.

The second quarter, outside of the 13-4 run from the Heat, was pretty miserable for both teams. Whether the Miami zone, or Boston putting in a bit more effort on the defensive end, both teams combined for just 37 points, just one more point than the Celtics scored on their own in the first quarter. After the 13-4 run, the Heat scored just seven points. The offense was ugly, but the Celtics did enough to regain the lead and take a 53-48 lead into the halftime break.

Celtics shoot just 6-of-22 in the second quarter but still manage to head into halftime with a 5-point lead.

Close one at the half ☘️ pic.twitter.com/Q929a3izGy

After trading a few baskets early in the third, Brown scored seven straight points to extend the Boston lead out to eight points. Brown, who was 8-10 from the field with 20 points at that time, was scoring from all three levels. His seven points came on a driving layup, a pull-up jumper, and a catch-and-shoot three. He looked poised and ready to carry the scoring burden, while also guarding Bam Adebayo.

Great patience by Jaylen Brown on that break. Didn't have the numbers on the break, didn't force it, waited for screen from Theis and knocks down the jumper.

While Brown was going off, Adebayo was doing the same thing for the Heat. After taking an extended break on the bench after picking up three fouls in the first half, Adebayo scored eight third quarter points and helped Miami pull back within striking distance. Miami also switched back into the zone defense after Brown burned them for seven straight points, which slowed down the Boston offense.

Brad Wannamaker swished a late three as the third quarter was ending, which extended the Boston lead to four heading into the fourth quarter.

Boston opened the fourth on an 8-4 run to extend their lead to eight. Brown and Wannamaker took care of the scoring, but Grant Williams made a huge impact on the other end. Williams was tasked with guarding Adebayo, and also picked up a big block, steal, two offensive rebounds, and a layup. Williams has been in and out of the lineup this season, but his stretch in the beginning of the fourth quarter was a huge boost for the C's.

A lot of his plays won't show up in the box score but Grant Williams is having himself a very nice night.

The Celtics pushed the lead out to as many as 11 points half way through the fourth quarter, but Jimmy Butler and the Heat would not go quietly. Butler was getting into the passing lanes on a regular basis on defense, and living at the free throw line on offense. With Miami in a bind, we all know who's hands the ball is going to be in.

Miami cut the lead down to as few as six points, but a Brown fast break layup and a Kemba Walker three extended the lead right back to 11, forcing Heat coach Erik Spoelstra to call a timeout.

Dragic, who is part of the Miami bench mob, played the entire fourth quarter and gave the Heat a huge boost. He scored 12 fourth quarter points, and made a number of big shots to keep the Heat close. With the lead down to five and just under two minutes to play, Walker found Smart for an above the break three to put Boston up eight, and ultimately put the game out of reach.

Hayward led all scorers with 29 points on 10-14 shooting, Brown added 25 points of his own, and Walker had 16 points and eight assists. Dragic led the Heat with 23 points off the bench, Butler added 20 points, and Adebayo had a double-double with 16 points and 10 rebounds.

The Celtics will be back in action on Thursday night when they host the Golden State Warriors.