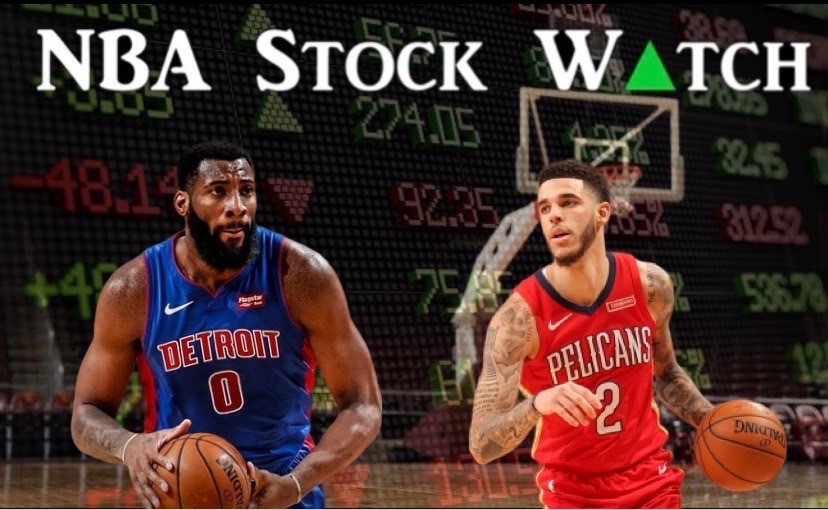 Welcome back to the seventh NBA Stock Watch of the season, where we run through the most important (and, maybe not so important) things that you might have missed from around the league. If you follow the NBA, you know there is never a dull moment. So per usual, there is plenty of great content to catch up on from the last week of basketball.

Dre was a stat machine for the Pistons this week. You can always rely on the big man to produce in the point and rebound departments, but he's been getting it done in all aspects of the game.

Drummond averaged 21.7 points, 16.7 boards, 3.3 assists, 3.3 steals, and 3.0 blocks through his last stretch of games. He dominated every defensive stat, leading the league in rebounding (per usual) and also finishing in the top three in both steals and blocks. No other player came even close to those numbers. Among NBA centers, in particular, he was fourth in scoring and fifth in assists. Drummond has been a menace to opponents on a nightly basis, resulting in a boost in stock value.

It seems like Ball is losing the little momentum that he's had this season. Since getting drafted second overall by the Lakers, the oldest Ball brother has had high expectations from the get-go that he has struggled to live up to. Being sent to New Orleans meant for a fresh start for Lonzo, as he also ditched his old hitch-filled shot with a new form that looked just a little bit less awful.

Yet, Ball might be playing the worst basketball of his career. Over his last three games, the Pelican guard put up just 9.3 points on 30% shooting - the fourth-worst mark in the league this week. He averaged 5.3 dimes, but at the cost of 3.7 turnovers, making for a very unimpressive assist-to-turnover ratio. New Orleans is dying to get Zion Williamson suited up, but in the meantime, you can likely count on more Lonzo bricks and cough-ups.

If I told you that a player on the Hornets posted a weekly average of 22.3 points and 9.5 assists who would you think it would be? Terry Rozier? Malik Monk or PJ Washington maybe? Nope, as you know from the header, it was indeed the second-year player Devonte' Graham.

Graham, despite admittedly missing far too many shots, had a crazy productive four-game stretch for Charlotte. To go along with his scoring and assisting, he also hauled in five boards per game and turned it over less than a third of the time that he assisted teammates. And although his 35% field goal percentage left plenty to be desired, he still managed to knock down threes at a 42% clip. A strong week brings a bullish view of Graham's stock.

After another hot start to the season and appearing as a "Stock Up" in last week's column, it appeared as if the reigning NBA Champion Raptors would be a top competitor yet again in the Eastern Conference. And while that could still surely be the case, it certainly didn't look that way in their last three games.

Toronto had a demanding slate of games in Week 6, playing three teams with records well above .500. Lucky for them, they were getting their aforementioned star point guard back from injury. But as it turned out, he may have thrown a wrench in the chemistry of the team. The dinosaurs dropped all three games, sliding to the No. 5 seed in the process.

Introducing the proud owners of the second-longest winning streak in the league, the Orlando Magic. Led by a high-powered offense in Week 6, Orlando swept their opponents and have won four straight contests, sliding up to their eighth spot in the Conference.

A quarter into the season, the Magic appear to be finding a stride. They put up over 125 points in their first two games, beating the Wizards and Suns comfortably. Then they capped off the week by holding the Cavs to 87 points in another victory. They face a brutal week ahead with the Bucks, Lakers, and Rockets all on the slate, but for the time being, Orlando can enjoy this mini run.

Although they might have had a small excuse this week, at the end of the day the Nuggets lost three of their four last games and, like the Raptors, have slid all the way to the No. 5 seed in the Conference.

Denver started with their lone home game of the week against the top-seeded Lakers, but couldn't keep up with LeBron or AD so fell by nine points. They then hit the road with stops along the East coast in New York, Boston, and New York again. While they did get the dub against the Knicks, they weren't as successful against the Celtics or Nets, losing particularly badly in Boston. Their offense comes and goes, but it must find ways to be more consistent to prevent low-scoring weeks like this one.

Look, I'm not one for snitching, alright. I'm no nark. But in the NBA world, Chris Paul proved why snitching can shamelessly pay some dividends.

In what was a crazy finish to the Thunder-Wolves game, the Thunder were down by two points with 1.1 seconds remaining and Minnesota headed to the line for a pair of free-throws. Karl-Anthony Towns missed the first FT, and the TWolves subbed in Jordan Bell who had his jersey untucked. This is when CP3 immediately took action, pointing at him and yelling at the referees for a delay of game. And he got it:


Chris Paul getting the officials to call a foul on a dead ball because Jordan Bell hadn't tucked in his jersey is max level CP3 pic.twitter.com/gZe3BrR7Yr
— CJ Fogler (@cjzero) December 7, 2019


The Thunder went on to make a full-court pass and lay-in at the buzzer to force OT, where they then won. So in a way, Chris Paul snitching led to the Thunder pulling off a miraculous win. Wild.

No one likes to travel during the hectic holiday season, right? While that may be true, that of course is not the reason traveling is on the Stock Down. Rather, it was courtesy of a LeBron James no-call travel for the ages:


And as always, the internet had some fun with this one:

The ballbonic plague. It's a real thing, folks. The term (coined by NBA Twitter great Rob Perez - I think?) is used when a game is out of reach and a team is running the clock out. Players will often pass the ball around like a hot potato during those final seconds to avoid getting charged the turnover when the shot clock expires before the game clock.

There was a great case of the ballbonic plague a week ago, but the case in Los Angeles on Sunday night was one of the all-time greats. Lakers rookie Talen Horton-Tucker checked in for the first time of his career, and got no respect from his teammates:

Talen Horton-Tucker checks in for first time in NBA career, Caruso immediately sends him the grenade once he crosses half court

But wait, rook says no

Dwight waits for final second on shot clock to give it back. NOPE. pic.twitter.com/xBvsfkmrBw
— Rob Perez (@WorldWideWob) December 9, 2019


The rookie hazing never gets old. And quite frankly, as a rookie it should be his job to adsorb the turnover and be the sacrificial player to the ballbonic plague!