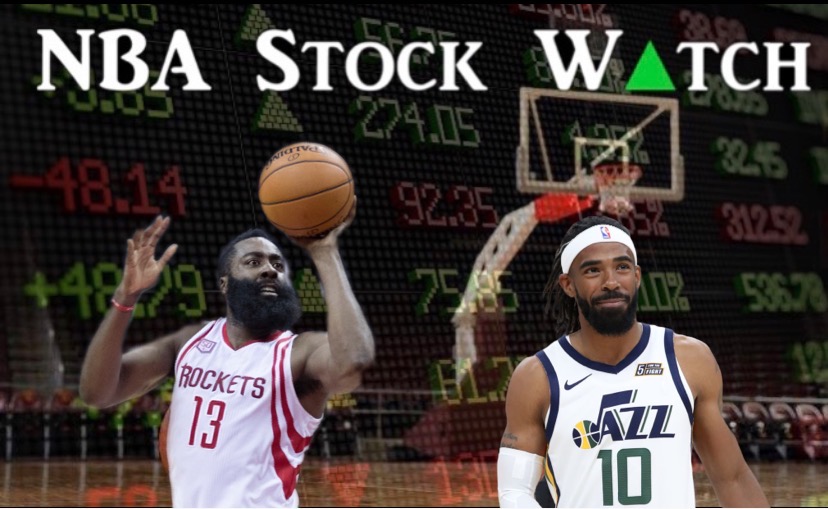 Welcome back to the sixth NBA Stock Watch of the season. As we flip the calendar to another month and see 2020 lurking in our paths, we realize how quickly time flies. It's hard to keep up with everything going on in our lives and, for most of us, this is especially the case for our NBA content. That is where the Stock Watch comes into play!

This week brought some monster performances, unfortunate skids, and everything in between. Let's get into it.

The Beard has been in a grove this week. The former MVP made things happen when he had the ball in his hands, averaging 47 points, 6.5 assists, 4.5 rebounds, and two steals on the week. He averaged nine more points than the next highest scorer, and also led the league in three-pointers made (7.5 per game). His +30.5 was also a league-best rating on the week.

Harden put on an incredible offensive display in both of his games, but especially Saturday night against the Hawks. The All-Star guard dropped 60 points in 30 minutes on 24 shot attempts -- a true testament to his shooting efficiency. On the week, Harden shot 54.3% from the field, 48.4% from three, and 87.9% from the charity stripe. His team simply torched their opponents when Harden was on the court this week.

If there ever was an award for consistency, Mike Conley would win it nine times out of ten. This week was the one.

Usually a rock-solid playmaker, Conley had a rare off-week. He shot 31.8% from the field, averaging a mere 9.8 points for his Utah Jazz. The guard surpassed double-digit points in just one of his four games and didn't contribute a whole lot on the defensive end. Conley started to get back on track on Sunday by dropping 20 points but will need to step up his play to help his slumping Jazz get back to their winning ways.

Anyone remember Jonas Valanciunas? No really, anyone? The seemingly forgotten NBA big man has quietly been having a nice rebound season (pun intended) with the Grizzlies after six and a half years with the Raptors. In Week 5, the seven-footer was not only reestablishing his name, but putting it up with the likes of the best big men in the league.

Valanciunas averaged 22 points, 14.3 rebounds, and 2.3 blocks in his last three games. Compared to the talented pool of NBA centers, he was fourth in rebounding, fourth in blocked shots, and sixth in scoring on the week. His 22 points came on an efficient 63% shooting, making for an overall awesome stretch of games for the Memphis big man - this is certainly the biggest rise in his stock value since his Raptors days.

When a team rattles off an 11-game win-streak, it makes my job here very easy. The Bucks boast the longest winning streak in the association, putting up yet anther perfect 4-0 week of play.

Although their schedule wasn't all that imposing, Milwaukee didn't take any opponent lightly. They played hard each night, resulting in top-five offense efficiency and a top-ten defense. As Gronk would say, they "did what they had to do" in each of the games, winning by an average margin of 16.2 points (2nd best on the week). And it hasn't been all Giannis Antetokounmpo -- the Bucks were zipping the ball around the court and finished the week with the top assist-to-turnover rate and the second assist ratio. Milwaukee is playing together exceptionally well over this impressive stretch, again proving why they're title contenders this season.

For a hot second, it looked like the Suns were finally taking the next step. With added veterans and developing youth on their roster, Phoenix opened the season 7-4 and already had wins against the Clippers and 76ers. Since then, they are 3-8 and are quickly slipping below a .500 record.

This was an extremely light week for the Suns, with only two games at home on their schedule. Yet, Monty Williams' unit still couldn't capture a win. The well-rested Suns let the Wizards score 140 points on their home court before falling to the Dallas Mavericks two days later. Phoenix finished the week with the league's worst defensive rating, giving up 130 points per game on average. They'll have a chance to right the ship starting Monday against the Hornets.

Have to give credit when credit is due. Not only are the Bucks trending up, but so are the Raptors after a strong week. Not only did Toronto go 4-0 in their busy week, but they beat two very capable opponents.

Toronto tipped off on Monday against the Sixers, a game that was well-fought the whole way and ended in a win for the Raptors. After taking care of the Knicks and Magic, they finished the week with an impressive win over a very solid Jazz team - the Raptors were up 77-37 at halftime and looked quite unstoppable all night long. After such a strong display and the number one defense of the week, the Raptors should not be taken lightly by anyone.

Who doesn't love to dish out candles for the Holidays? As a son, that is perhaps the most common (albeit basic) gift for your mom or grandmother. And you know what, I now only have more reason to believe that they are a rock-solid holiday gift after Celtics rookie Grant Williams gave out candles to Celtics workers:


Ahead of Thanksgiving, @Grant2Will surprised Celtics staff with special gifts to show how much he appreciates them and their hard work behind-the-scenes. pic.twitter.com/oFWBconzOX
— Boston Celtics (@celtics) November 28, 2019


This validates that all of the Yankee Candles I gave my mom over the years are respectable! Right?

Speaking of James Harden's 60-point game this weekend, we also got a great reaction from the beard when he found out that he was two-points shy of his career-high point total:


The perfect reaction from a guy who always seems to be concerned with his stats and knowing when he needs one last rebound for a triple-double...but seriously, I guarantee you that he wanted to check right back into the game after discovering that, despite his team being up by a million already. The career-high will have to wait!

The addicting kid song that we all know and love made its way into the NBA world this week when Russell Westbrook rocked some fire Baby Shark themed kicks: