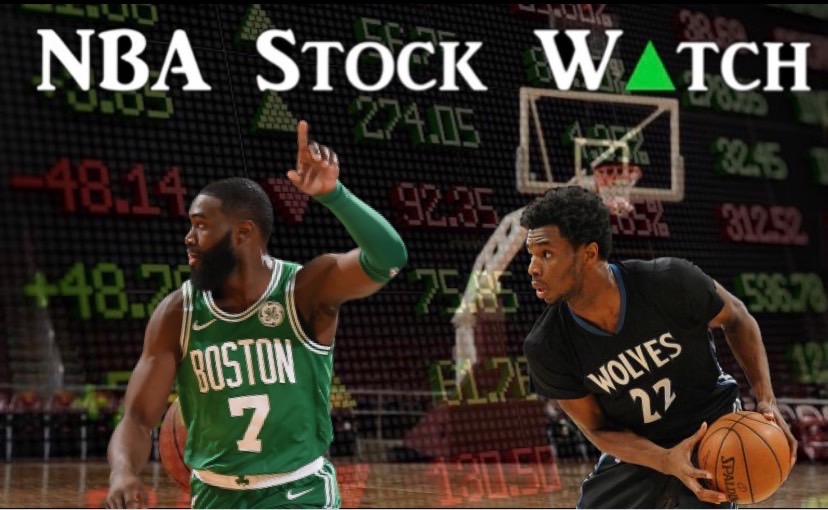 For the last Stock Watch of the calendar year, we have a Celtics player making his first-ever appearance on the Stock Up list, another fan-favorite Celtic showing off an unknown skill, and the red-hot Pelicans rolling to a 4-0 week. As always, there's plenty to discuss so let's jump right in.

Jaylen Brown has made tremendous strides to his game in his fourth season. The Celtics' forward is averaging career-high in points, rebounds, assists, steals, field goal percentage, and three-point percentage. In Week 9, he showcased just how far he's come since his time at Cal.

Brown finished seventh in scoring after posting 27 points per game on 62.2% shooting - a mark no other top-10 scorer could match. At one point in time, it seemed like JB couldn't score a three-pointer with a chair defending him. Now, the 23-year-old is posting 40% three-point shooting on the season and, over his last three games, a scorching 57.9%. Against the Cavs, Brown tied his career-high in scoring with 34 points. He has six 30+ point games on the year, two of which came in this week alone. To top it off, he grabbed 6.7 boards and dished out 2.3 assists per game. Brown put on a show and finds his stock soaring in the process.

At first glance, Wiggins had a solid week. He put up 20 points, 8.5 rebounds, and 4.5 assists through his pair of games. However, when you look closer, you will see that the TWolves forward had an incredibly inefficient stretch since last Monday.

Wiggins was the only player in the league who shot under 31% and averaged more than three turnovers per game in Week 9. His 4.0 turnovers were the sixth most, while his shooting percentage was in the bottom eight. His 17.6% three-point mark did him no favors either. So sure, Wiggins stuffed the stat sheet moderately well this week, but -9.5 point differential hurt his team and his share value in a big way.

When's the last time you've heard Darrick Favors' name in the NBA news? Does anyone know what team he's even on anymore? Well, the big man may have only averaged 10 points per game, but has been helping the Pelicans win four straight games.

Favors was the top rebounder of the week, hauling in an impressive 14.5 boards per game. For a power forward, he was a great playmaker as well by posting 3.8 assists per game with only 1.5 turnovers. He finished in the top ten in assists out of the league's power forwards. Favors had the second-best plus/minus on a New Orleans team that went 4-0 on the week, only further strengthening his bullish stock profile.

The lowly Pelicans have been struggling without their franchise-altering draft pick Zion Williamson suiting up yet this season. They went into the week with a 7-23 record and a tougher four-game slate of games. Yet, they went undefeated and nearly doubled their win total in the matter of a week.

Not only did New Orleans go 4-0, but three of their four wins were over playoff teams and two of the wins were on the road. They opened the week with a win over the shaky Trail Blazers and followed that up with a win over the Nuggets on Christmas Day, and a pair of weekend victories over the Pacers and Rockets. All wins were very impressive, even though Houston went without their top stars. The Pels 14.2 net rating was top-three in the league, mostly in part to a top-four offense on the week. Their whole roster, especially guys like Lonzo Ball, Brandon Ingram, Jrue Holliday, and the aforementioned Derrick Favors, have been performing at a high level to help their squad slightly climb out of their large hole in the Western Conference standings.

A short two weeks ago, Sacramento was right in the thick of the playoff race out west. Dating back to December 15th, though, they've lost seven straight games and have fallen nine games under .500.

Week 9 brought a doable schedule for the Kings, with home outings against the Rockets, Timberwolves, and Suns, and a road matchup with the Nuggets. Of those games, you think they'd be able to win at least two of them. On the contrary, Sac-Town lost every game of the week. Their offense was in the bottom 30 percentile and, while the defensive side wasn't all that bad, the 105.4 offensive rating wasn't enough to get the job done. A Kings team that once looked like a solid roster has really looked like a mess lately.

I was hesitant to give the Spurs the nod here, but ultimately decided to share some cautious optimism regarding their past week.

San Antonio still hasn't proven that they can truly compete with the top teams in the NBA this year. They just lost again to the Mavericks on the day after Christmas. That being said, their offense seems to have found some rejuvenated life. The Spurs, led by LaMarcus Aldridge and DeMar DeRozan, had by far the most efficient offense in Week 9, posting a 123.9 offensive rating that was 5.7 points higher than the next best unit. In their pair of wins over the Grizzlies and Pistons, they dropped 145 and 136 points, respectively. Even their defense was in the top-ten, making them and the Pelicans the only teams to finish with a top-ten offense and defense on the week. They will need to top some more convincing opponents to prove that they can hang, but the Spurs are showing some life here in late 2019.

It's Bowl season, folks. For those who don't know, Joe Burrow is LSU's star quarterback and likely first pick of the next NFL draft in the spring. He shattered history books over the weekend by throwing seven first-half TDs against Oklahoma in the Peach Bowl. It turns out the QB1 also has a silky smooth jump shot:


The LSU Tiger shot 10-12 to help his football team win a friendly shooting contest against Oklahoma. I see you, Burrow!

Ah, I remember when I first learned how to walk. Oh, wait, no I don't because I was too young! However, for some people, it doesn't come as naturally, because the No. 1 draft pick of the 2019 NBA Draft is apparently relearning how to walk...

The Pelicans are reportedly trying to teach Zion how to walk and run differently in his rehab process. Believe it or not, that's actual news that was reported this week. It sort of makes sense since throughout his short career at Duke, Twitter was constantly cracking jokes about how he walked and ran around the court in a rather humorous way. But the fact that the team actually might be doing something to change it is hilarious. And of course Chuck and the TNT crew had to get their jokes in too:


Lonzo Ball having to fix his shooting form isn't looking too bad compared to this now!!

It may be a little late, but last Monday the Boston Pops had a fill-in conductor for their Christmas show at Symphony Hall. And it certainly was not your average conductor:


That's right, if you haven't seen it already - Tacko Fall was conducting the Boston Pops. Truly a sight to see:


Tacko Fall leading the orchestra through “Sleigh Ride.” He even threw in a little spin. pic.twitter.com/2cXRKbpHbh
— Nicole Yang (@nicolecyang) December 24, 2019

Happy Holidays and New Year to you all! See you in 2020 for many more stock reports!