The Boston Celtics lost a nail-bitter to the Indiana Pacers 122-117 in a matchup of two of the better teams in the Eastern Conference. Boston fought through a number of injuries and a ton of foul trouble, but were ultimately dispatched by the depth and reliability of the Pacers. A tough loss no doubt, but an encouraging effort under the circumstances. 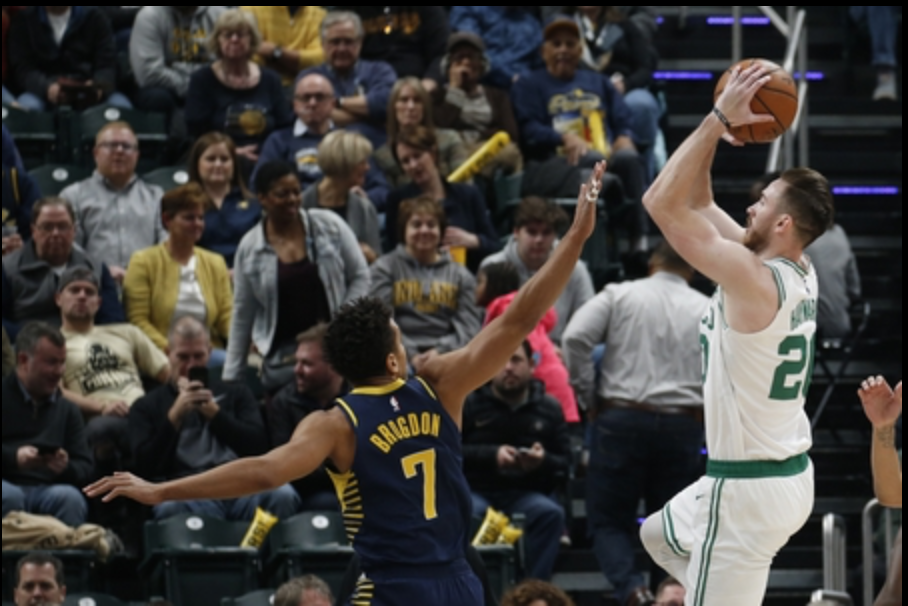 The Celtics have been criticized at times this season for their lack of size in the front court. Tonight in Indiana, that fact was going to be tested. The Pacers start a giant front court of Domantas Sabonis and Myles Turner, meaning one of Boston's wings was going to be matched up against a de-facto center. Jaylen Brown got the assignment to start, guarding Turner to open the game, arguably the less intimidating player in the post.

Tatum and Brown have both improved quite a bit at guarding up. Their defensive versatility, always a strength, has continually gotten better.

Both teams started the game hot from the field. The momentum the Celtics had gained against the Cavs on Monday night clearly had carried over, and the Pacers were moving the ball well and knocking down their open looks. The Pacers, for years now, have been known as a defense-first, outscore you never team, but the addition of players like Malcolm Brogdon and TJ Warren have made this team dangerous on the offensive end.

Kemba Walker, not to be outdone by the rising star of Brogdon, opened the game on fire. He hit five of his first seven shots, including two threes, for 15 first quarter points.

While Kemba was scoring, Brown was dishing the ball like he never has before. Brown has been sensational all season, in many different facets of the game, but being able to make plays for other is a huge development. He has always had top-notch athleticism, and he has worked hard to add an outside shot and above average defense, but being able to make the right read and the appropriate pass is a great next step.

That’s five assists for Jaylen a Brown already which means he has tied his career high — in the first quarter.

After the Celtics took a 32-24 lead with just under two minutes left to play, the Pacers used a 6-0 run, powered by the always annoying T.J. McConnell, to cut the lead back to just two heading into the second quarter.

A Tatum-led bench lineup struggled to score early in the second, but contributions from Brad Wannamaker and home-town favorite Carsen Edwards helped to keep a slight lead. Tatum needs to be able to lead those second unit groups, and many times this year he has, but tonight his shot just wasn't falling, and it wasn't the prettiest basketball.

Indiana, and Sabonis specifically, used the free throw line to keep the game close and eventually take the lead. Sabonis was taking advantage of whoever guarded him, and his variety of post moves was giving the Boston bigs fits. He had six of the team's 13 first half free throws. The Pacers used a 14-4 run in just under three minutes to open up a 9-point lead with four minutes to go in the half. After getting down by as many as 13 points late, the Celtics closed the second quarter on a 13-4 run, sparked by nine points from Walker to go along with two dunks from Daniel Theis. The Celtics showed good fight, especially given the fact that they were getting a very tough whistle.

Just an awesome first half by Kemba Walker. The Celtics were damn sloppy, but his 24 points have them within four at halftime.

After trading runs to end the first half, the Celtics and Pacers decided to trade leads in the third quarter. Walker continued to scorch the nets, scoring another 10 points in the first six minutes of the third. He was carrying the C's on a night when they needed him to, but the Pacers were getting a balanced scoring attack that kept the game close.

Brown, who had just four points in the first half, decided to play Robin to Walker's Batman in the second half. He had 10 points in the third himself, to go along with a career-high eight assists. He was contributing in all areas of the floor, knocking down threes, finishing loud dunks, and bullying smaller defenders in the post. With Tatum struggling to score, Boston really needed what Brown was providing.

Jaylen Brown up to eight assists — three more than his previous career high. And he just slammed down an absurd dunk from a Kemba a Walker fast break dime.

The Pacers' depth was able to keep the score close throughout the third, but a late flurry from Tatum and a 7-0 run to close the quarter led to a 10-point lead heading into the final frame. With Brown and Walker on the bench to end the third, it was huge turning point for Tatum to take control and give the team some separation. Going back to the final two minutes of the second quarter, the C's used a 50-27 run to turn a 13-point deficit into a double-digit lead.

And just when you thought the C's had a chance to put the game away, the Pacers used a 10-2 run to open to fourth quarter to get right back into it. Justin Holiday (6) and Aaron Holiday (2) fueled the Indiana second unit, and some sloppy turnovers from the Tatum/bench group didn't help matters either.

I know the Tatum and bench units have been good over a short span of games but it has always felt like smoke-and-mirrors and with Gordon back I had hoped it would go away. Having Smart would also help, but keeping two of the four on the floor seems possible.

After stemming the tide when Brad Stevens put the starters back in the game, the Celtics were dealt another shot of adversity when Gordon Hayward went back to the locker room after taking a shot to the nose from Doug McDermott.

Video of the shot Hayward took to the face: https://t.co/eYaP0Wn38a

With the game all square at 102-102 on the road, no Hayward or Marcus Smart, and five fouls on both Theis and Brown, the Celtics were faced with an uphill battle. After Tatum knocked down two free throws, Aaron Holiday knocked down a corner three to take a 1-point lead. The Holiday brothers were a thorn in Boston's side all night, combining for 35 points off the bench. After two free throws from Brogdon extended the lead to three, Walker, as he had done all night, tied the game with his seventh three of the game.

Both teams traded hoops, and then Brown picked up his sixth foul of the game biting on a pump fake from Brogdon. He knocked down both free throws, and Justin Holiday made yet another corner three to put the Pacers up by five with a minute and a half to play. But the Celtics kept their heads and forced the issue, driving to the basket and getting a pair of free throws from Tatum and Wannamaker to cut the lead to just one. Sabonis made a shot, but Wannamaker answered with a circus shot of his own. Brogdon knocked down two free throws to push the lead to three, but Walker cut the lead back down to one with a layup with just over 10 seconds to play. After a timeout, the Pacers were able to inbound the ball to Brogdon, who calmly knocked down his twelfth and thirteen free throws. Stevens called his final timeout and drew up a play.

Walker got a long look at a three, but missed the game-tying look by a solid foot. The Celtics fought their hardest while being incredibly outmanned, but came up just short to a very good Pacers team.

The Celtics will be back in action tomorrow night, as they complete the second half of a tough back-to-back against the rival Philadelphia 76ers.