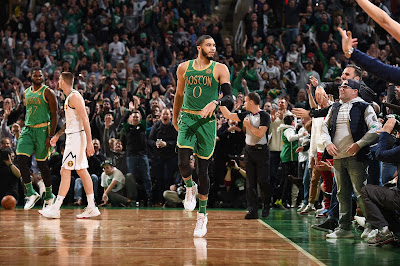 JT, JB, and company make light of Nuggets in battle of conference second places; Celtics win 108-95 at home and move to 16-5 on the season.

Just two weeks after the Celtics visited the Mile High City to lose the game and looked like they might be losing Kemba for a while, Kemba was back, this time to welcome the Denver Nuggets who came into Boston second in the West. For the second time in the week, TD Garden played host to a team that had won on the road the night before. Here’s how it went down.

Pregame: Marcus Smart. MARCUS SMART. The heart and soul of the Celtics was back in the starting lineup tonight after a short battle with a contusion and an illness. His usage was primed to be a huge point of intrigue against the dynamic duo of Jamal Murray and Nikola Jokić. Smart found himself involved early as usual, setting up teammates with dimes and being a defensive pest on the Nuggets guards.


First half: JT, JB pace the Celtics offense. Early on, the Celtics took advantage of a slow Nuggets defense, ranked #1 in the NBA coming into Friday night, by exploiting the pick and roll game. The early beneficiary was the hot shooting hand of Jaylen Brown, who hit three threes before the Nuggets called the first timeout of the game. He was a double-digit scorer before the end of the first quarter.

In the second quarter, Jayson Tatum, father of now-2-year-old Deuce, heated up offensively to counter the fight of Nikola Jokić and his Denver Nuggets. Heading into halftime, it was the team defense of Brad Stevens’ squad that dictated the tempo, containing every member of the Nuggets other than their 7-foot All Star to single digits. The frustrated Nuggets finished the half shooting a hideous 1/15 on 3-point FG. Yeah that’s right; do the math, that’s 6.7% from deep. The timely stops eventually took the Celtics into halftime with an 8-point lead.

Third quarter: Millsap yaps while Celtics make some fish and chips. Things got chippy between Paul Millsap and the refs when the Celtics got aggressive. Relentless as a team on defense, Boston forced turnovers to keep the Nuggets at bay and pad the lead to 21. The quarter was punctuated in the final couple of possessions with what was arguably the loudest 30 seconds of TD Garden in the NBA season thus far. A fastbreak Jaylen Brown poster dunk assisted by Jayson Tatum was just dramatic build-up to the final play of the quarter where Tatum stepped back to knock down his fourth triple of the night.


Fourth quarter: Closing formalities not an issue as Celtics have some more fun. The final box score was straight dominant from the home team. A 30-point double double from Nikola Jokić was never going to be enough against Jaylen Brown, Jayson Tatum, and Kemba Walker who combined for 66 points. The Nuggets finished 17% from 3 and 42% overall from the field next to 37% and 54%, respectively, from the Celtics. The Celtics cruised in the final minutes while getting some garbage time minutes for Carsen Edwards, Vincent Poirier, and Grant Williams who is still looking for his first triple of the season, now 0/25 from deep as a rookie. Eleven Celtics finished with points as the Celtics ran the clock down to seal victory number 16.

The Celtics move to 16-5 on the season to hold second place in the East and will close out the homestand against the hot mess called the Cleveland Cavaliers on Monday night with a 7:30 PM tipoff.