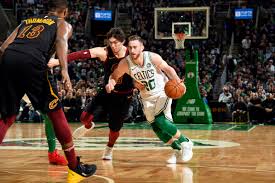 It’s been a rough “go” thus far for the NBA’s oldest rookie, 66-year-old Cavalier head coach John Beilein. Monday his team of professional ballers became the season’s fourth squad (Brooklyn, Philly and Sacramento the others) to miss more free throws than they made during a full game.

The most discouraging part of it all for the franchise’s 21st bench leader had to be that those foul-line frolics were irrelevant to the outcome.

Curiously, the Celtics have been the beneficiaries of such “foul” shooting twice (the Nets on Thanksgiving Eve, the other). Incidentally, Boston’s bodacious Free-throw Defense (.728) currently tops the circuit.

In their five games since the holiday, the C’s have averaged just under 16 Turnovers per game – after committing just over 13 per through their first 17 outings.

Monday’s NBA “Poo-poo Platter” offered up a nine-game menu – but five of the offerings included leftovers from the previous day, and one was entirely re-hashed.

The collective Margin of Victory in the five games involving teams that had played Sunday as well was 43 points (8.6 ppg) … the total MOV in the FOUR contests involving the R&R’ed was 41 points (10.25 per).

My next “In Proportion” post will take a closer look at NBA “competition” from this perspective.