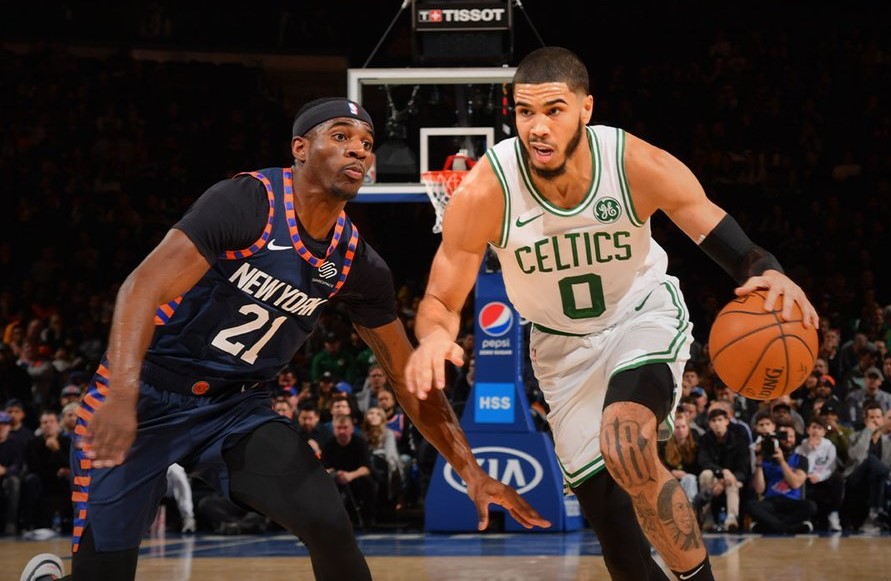 The Celtics didn't travel far for this one -- just over the Manhattan Bridge from Barclays Center to Madison Square Garden -- to take on the 4-15 New York Knicks. Similar to their last matchup, the Knicks gave the Celts a battle through the whole game until Boston managed to pull away late to capture a 113-104 win.

The young duo of Jayson Tatum (30pts, 7ast, 6reb) and Jaylen Brown (28pts, 5reb) were fantastic in this one, combining for over half of Boston's points and making huge plays when they needed them to.

The game opened with both squads sleepwalking out of the gate. There were five turnovers in the first five minutes, leading to plenty of fast-break opportunities, like this Kemba Walker layup off the Tatum steal:

Julius Randle (8pts) and Tatum (10pts) were taking advantage the most, leading their teams to a few early buckets. Walker, Tatum, and Brown combined for Boston's first 16 points before Enes Kanter got on the board at the 5:30 mark. In fact, the aforementioned trio combined for 23 of the Celtics' 31 points in the quarter, while Kanter and Brad Wanamaker were the only other Celtics contributing on the scoreboard.

The Knicks stuck to their game plan against the under-sized Celtics, taking it to the paint and rarely settling for three-pointers. Although this was leading to a 60% field goal percentage (15% higher than the Celtics), Boston took four more shots that ultimately gave them a slim advantage by the end of the quarter.

Boston's supporting cast finally came to life in the second frame with four different bench players getting into the mix. However, so did the Knicks and their long list of big forwards. Between Randle, RJ Barrett, Bobby Portis, and Taj Gibson, New York managed to match the second-unit production of the Celtics to keep it a tight contest halfway through the quarter.

One of the supporting cast members was no other than everyone's favorite timelord Rob Williams, who blocked a pair of shots and threw down a monster dunk:

The second half of the frame was dominated by Tatum and Brown. They scored or assisted on every one of Boston's baskets after the 7:00 mark in the quarter, and scored 13 of the team's last 15 points. The young duo knocked down outside shots, hit tough faders, and got to the hoop for crafty finishes in the paint.

While the offense was sharp, the Celtics defense lacked the size to properly contain New York. The Knicks continued to penetrate and getting to their shooting hand at will, leading to a 52% field goal percentage and matching Boston's 58 points.

Things went south in a hurry during the second half. The opening four minutes saw the Knicks go on a 14-5 run and the ever-important Marcus Smart exit the game after suffering a blow to the abdomen.

Already down by nine points, the departure of Smart only made it more challenging to contain the larger bodies on the Knicks roster - especially since it was the 6'0" Carsen Edwards who replaced him. Luckily, the Celts strapped down a bit defensively. A Kanter block and Brown steal sparked a mini 7-0 run for the green team, instantly cutting the deficit back to two.

While the Knicks continued to exploit Edwards on offense and have their way in the paint, Enes Kanter was keeping Boston in striking distance with his strong offensive rebounding and finishing ability at the rim. The big man put up seven points and four offensive rebounds in a matter of seven minutes off the bench.

New York's 40 points in the paint led them to a four-point lead entering the final frame of the evening.

Boston started to figure out their interior defense by the fourth quarter, swarming Knicks bigs in the paint with double or triple teams. Still, New York was drawing fouls and getting to the free-throw line for easy points, preserving their slim lead for the time being.

Tatam, building onto his impressive night, kept his hot hand. The 21-year-old refused to let the Knicks pull away, hitting big shot after big shot until his Celtics were within one yet again:

The Celtics recaptured the lead with six minutes remaining after a JB steal and layup in transition - it was their first time leading since the first half:

From there, the Celtics looked like their normal selves. They put up a 12-0 run, capped off by back-to-back threes by Walker and Tatum, to open their largest lead of the night. Once again, it was too much Tatum and Brown for the Knicks to handle. Similar to the end of the first half, the duo scored or assisted on 15 straight points for Boston. Not only did Tatum finish the game with 30 points, but he dished out a career-best seven assists.