Celtics fans get their Tacko Time last night at the Garden

You know Brad Stevens wanted to give the fans what they wanted. And you know Tacko wanted on the court. Well with 4:31 left in the game of the Celtics blowout win over the Pistons it happened.

Brad Stevens had a fun story to share after the game about his daughter's pre game advice on stopping Andre Drummond:

With six minutes to go, the crowd roared when Fall stood up. The moment, however, proved to be a false alarm, as Fall was just high-fiving point guard Kemba Walker, who had checked out of the game. A few seconds later, he stood up again — only to sit back down. The crowd let out a collective sigh.

A smirking Stevens motioned for the chants to get louder. He revealed after the game he was thinking about a pregame conversation he had with his family, who is typically in attendance but was out of town Friday evening. His son, Brady, asked how the team was going to handle Pistons big man Andre Drummond. His daughter, Kinsley, had an idea.

“She said, ‘It’s time to give the people what they want,'” Stevens said. “That’s all she said. I was laughing the whole time everybody was chanting because all I could think about was Kinsley leading the cheers.”

Celtics fans got to open a Christmas present a few days early last night in Boston. 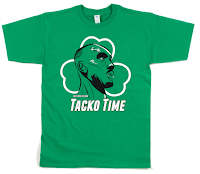