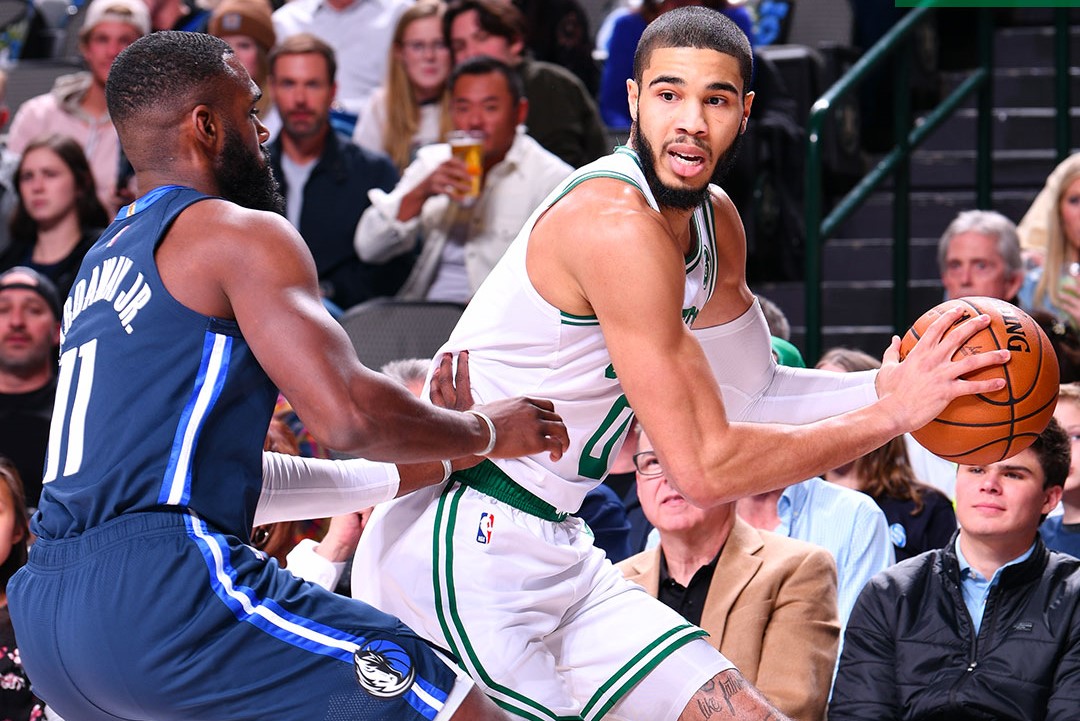 The Dallas Mavericks, coming off a big win in which they snapped the Bucks 18-game win streak, hosted the Boston Celtics on Wednesday night for a primetime matchup. Kemba Walker (32pts, 5reb), Jaylen Brown (26pts, 9reb), and Jayson Tatum (24pts, 8reb) combined for 82 points to lead the Celtics to a 109-103 victory on the road.

It was a cold start to the ballgame for both units. There were a whole lot of threes being taken - 10 of the first 13 shots in the game were three-pointers - but to little success.

Semi Ojeleye, getting his first start of the year, knocked down a three for the first Celtics points of the evening. However, it was their only field goal through the first five minutes of the quarter, allowing Dallas to build an early eight-point lead.

After a Brad Stevens timeout, the Celts were able to get going offensively. Walker absolutely caught fire, rattling off ten straight points in a matter of one and a half minutes. During that time, Boston used a 12-3 run to quickly erase their deficit. And when Kemba is in a heat-check, you know he doesn't miss:

Walker hit another three soon after this, putting up a season-high 16 first-quarter points to help the Celtics put up 29 on the scoreboard. Yet, they found themselves knotted up with the Mavs after 12 minutes, thanks to Jaylen Brunsen, Seth Curry, and a well-balanced Dallas offense. The opening frame ended with a buzzer-beater via Tatum, which was his first score of the night:

Curry led the Mavericks attack in the second. He and Kristaps Porzingis (8pts in 2Q), who got going after a bit of a slow start, scored all but one of Dallas' points through eight minutes of the second frame. Porzingis scored 13 in the first half, while Curry dropped 12 points off the bench.

With Walker resting on the bench, the Celtics offense went cold again. They went 0-7 from deep in the quarter and opened the door for the Mavs to build their largest lead of the night at 10. Even once Kemba returned to action, he didn't score any more points in the half.

That's when Boston's young duo started coming to life. Tatum and Brown each found a rhythm, scoring ten straight Boston points to spark an 8-0 run. Still, the Celts shot just 6-23 in the quarter for a brutal 26% field goal percentage. The Mavs knocked down twice as many three-pointers as the Celtics through the half to help them control the lead going into the break.

Through six minutes of second-half play, Brown (6) and Tatum (9) were the only Boston scorers. The young wings bailed the Celtics out all quarter long, taking matters into their own hands and keeping their ball club within a single possession of Dallas.

Tatum, in particular, really got into a groove. The 21-year-old had the outside and inside game working to perfection, including this slick take to the rim...


...and this contested trey:


For the opponent, another eight points from Porzingis helped preserve the Mavericks lead by mid to high single-digits.

However, the quarter ended with a beautiful 5-0 run courtesy of Grant Williams. Overall, the Celtics closed out the final 6:22 of the 3Q on a 16-5 run to take their largest lead of the night into the final 12 minutes.

As was the case for the third quarter, Tatum and Brown continued carrying the load for Boston. They combined to post the first seven Celtics points of the quarter. JT was in takeover mode:

From there, Walker retook the torch and kept it red-hot. The point guard poured in 10 points to put the Celtics up by double-digits for the first time.

The Mavs quickly responded courtesy of two Seth Curry threes and a lay-up to cut into the Boston lead. With 45 ticks remaining, Dallas scored five points in seven seconds after stealing the ball in the backcourt and hitting a straight-on three. This sliced the deficit to five points, but Boston was able to ice the game with their free-throws.