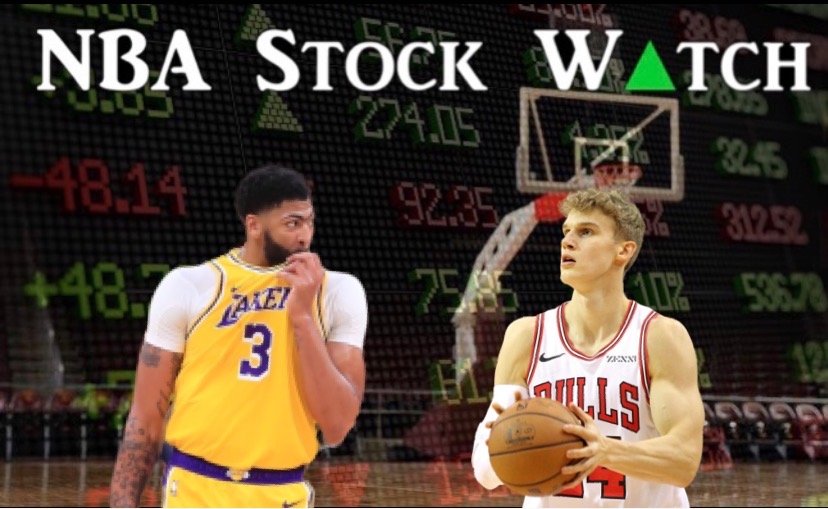 As we roll into Week 6 of the NBA season, we all have a lot to be thankful for. What would we do without Clint Capela's historic rebounding? Without the exciting Mavericks winning back-to-back games by 40+ points? Without the newest NBA-themed "gonna tell my kids" memes?

There is never a shortage of entertaining things happening throughout the league, which is why we are here with another Stock Watch to bring you the top takeaways from this past week of hoops.

I don't think anyone will be shocked to hear that Anthony Davis is beasting on the court lately. The Lakers' big man has constantly been a menace on both ends of the floor, finishing the week averaging 29.7pts, 7.3reb, 4.7ast, 2.7stl, and 2.3blk. I included the defensive stats to show just how disruptive he has been to opposing offenses - he was the only player to finish in the top eight in both categories.

The scary thing is that the Brow has been just as dominant as a scorer as he has a defender. He shot 50.9% from the field and his ability to stretch the floor makes him incredibly hard to guard, as the big man shot a sharp 55.6% from deep on six attempts per game. Mix that with his 91% free-throw shooting, and Davis has been one of the top scorers in the league this week.

There was a time during his first two seasons that Lauri Markkanen looked like he could be the next closest thing to Dirk as opposed to Kristaps Porzingis. Markkanen was fantastic in his sophomore campaign last year when he averaged 18.7pts and 9.0reb per game. Suddenly, his shooting stroke has disappeared in year three - and it was even worse since last Monday.

Markkanen played in four games this week and shot 28% from the field. Of all NBA players who took at least 10 shots per game, this was the lowest mark in the league. The seven-footer's rebounding also saw a decline, as he grabbed just 6.8 boards a night and ranked in the bottom third percentile in rebounding percentage. Markkanen also turned the ball over twice as often as he assisted his teammates. I still believe the 22-year-old Finn will come around, but so far this season he's done nothing but hurt his value.

Another NBA center is featured in this week's segment - you love to see it! Capela was a force on the boards through his four games, averaging 20.5 rebounds and snagging six offensive rebounds per contest. To put that number into perspective, Capela came close to averaging more offensive rebounds than a few teams as a whole like the Kings (7), Thunder (7.7), and Wizards (8).

Capela's dominant work on the glass put him in elite company this week after he registered his seventh consecutive game with 19 or more rebounds. Dennis Rodman is the only other player since 1976 to do that (and I know 19 is a weird cut-off for this stat, but I don't care - it's impressive no matter how you slice it). In addition to the 20.5 boards, the 6'10" big man also posted 18ppg on the week. The Rockets' stock may be slipping, but Capela, who finished in the positive side of the plus/minus, has seen his stock rising as of late.

This one is a no-brainer. The Mavericks are an incredibly exciting team to watch, but their talent is also translating to what matters the most - wins.

Led by the phenomenal Luka Doncic (who could have easily earned a back-to-back spot on my Stock Up list), Dallas has been steamrolling their opponents. On paper, you will see that they went 4-0 on the week and are on a five-game winning steak. When you look closer, you will see that they beat their matchups by a stunning 27.5 points per game on average. This number was easily the highest on the week, mostly driven by a 48-point victory over the Warriors and a 42-point thrashing of the Cavs. Even with these impressive blowouts, their best performance had yet to come. The Mavs capped off a stellar week in Houston, where they routed the Rockets by 14 points and sent their stock value soaring even higher.

It turns out that swapping Kemba Walker with Terry Rozier will not end all that well...who would've thought? The Hornets are slumping and, after hovering around .500 for a while, are now quickly slipping out of contention in the East.

Buzz City was winless in their four games of the week, falling to the likes of the Raptors, Nets, Wizards, and Bulls. They proved that they cannot hang with the legitimate teams, as Toronto blew them out by 36 and the Nets handled them without much resistance. Their second set of games were much more winnable -- in fact, Charlotte almost won both of them but instead choked both wins away. In back-to-back games, the Hornets managed to blow a six-point lead in the fourth quarter to Washington and an eight-point lead with one minute left in the game to Chicago. The latter was especially depressing for the Charlotte fanbase, who had to witness their team give up six points in the last eight seconds of the game, which ended with a Zach LaVine game-winning three-pointer. Yikes!

We are five weeks into and season and, ho-hum, the Nuggets are once again the two seed in a loaded Western Conference. In case anyone is still sleeping on them from last year, Denver is proving that no one should overlook them.

Mike Malone's club had virtually no traveling on their plate this week, as they hosted three games at the Pepsi Center in Denver. However, they had some tough competition in the Rockets, Celtics, and Suns all coming through their door. Thanks to a solid offense and a rigorous defense, the Nuggets came out on top in all games. They snapped Houston's eight-game win streak, handed the Celtics a tough, hard-fought loss, and took care of the Suns in their Week 5 finale. If you didn't think the Nuggets would be a top team again this year, you might want to think again.

This might be my favorite thing that happened this week. James Harden crossed up Patrick Beverly so bad that the Clippers guard found himself in an awkward position on the court. From there, the Internet took over:


I never realized how relatable this was until this happened in an NBA game. Who would've thought?

I can't believe I'm saying this, but I have to downgrade Rob Gronkowski's stock value - and it has nothing to do with the fact that he's still not coming back to the Patriots or that he trolled the world by announcing his beach party at this year's Super Bowl.

Nope, Gronk's value took a hit (at least to people in New England) when he joined the Lakers dance girls on court to do a little number:


Now I'm not saying that he didn't kill this (he did). I just don't ever want to see Rob Gronkowski in Lakers gear dancing with cheerleaders. He's from New York so there's no excuse to be dressing up in the purple and gold!

Well, the latest viral meme has hit the internet, and this is one I can get on board with. The "I'm going to tell my kids" meme is basically finding pictures that remind them of a famous person. NBA Twitter (and even players) have already partaken in this, so I have collected some of my favorites:


gonna tell my kids this was me pic.twitter.com/AuuDbyrbiF
— Blake Griffin (@blakegriffin23) November 24, 2019

Gonna tell my kids this was the caveman from the Geico commercials pic.twitter.com/OEzFqpmPGp
— Ryley Palladino (@ryleyjp11) November 22, 2019

Photo via @lakers and @chicagobulls