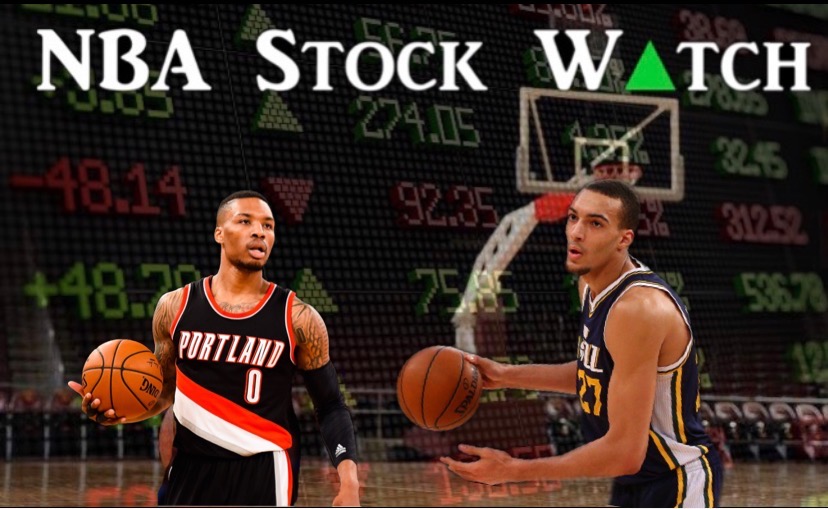 Welcome back to another edition of the NBA Stock Watch, a one-of-a-kind weekly rundown of what's happening in the world of basketball. This week features Rudy Gobert's amazing week, a return of a potential NBA burner account scandal, the struggling Spurs, and much more. Let's jump right into it.

The Stifle Tower was an absolute menace in Week 4. The seven-foot Frenchman had his way in the paint - both on offense and defense - and helped his Utah Jazz to a pair of victories.

Looking back on the week, Gobert averaged 22 points, 15.3 rebounds, and three blocks per game. His rebounding and shot-blocking were each top two in the league, trailing just Client Capela and Myles Turner, respectively. To make it even better, the Jazz center got his 22 points per game on an insane 84.8% shooting percentage - which was also good for the best mark in the league. It was an all-around dominant stretch of basketball for Gobert, launching his stock value in the process.

As the Blazers have stumbled out of the gate this season, Damian Lillard has been the one constant. Well, up until this week. The point guard started the year averaging north of 30 points per game. During Week 4, he averaged just 19.3 points on very poor shooting.

After a fine start to the week, Dame DOLLA dropped two brutal performances against the Raptors and Spurs in which he made only six of his 31 shot attempts. For those who don't want to do the math, that's a whopping 19% field goal percentage. Many of these misses came from three-point range, as Lillard missed 13 of his 16 deep attempts. If it weren't for his great shooting from the charity stripe, Lillard's underwhelming 19.3 points would've been even worse. Look for this Portland stat to bounce back very soon.

He may not make highlights or stuff the stat sheet, but Jimmy Butler has been making a big impact for his 9-3 Miami Heat. The 30-year-old forward has taken a bit of a different role in South Beach, serving as a pass-first playmaker for his team. And so far, it's been working.

Butler averaged 16.7 points, 10.7 assists, and 4.3 rebounds in Week 4 while wracking up a league-best 2.7 steals per game. He isn't known for his passing, but Jimmy Buckets nearly led all playmakers in assists, trailing just LeBron James. What made his passing even more impressive was just how smart he was with the ball in his hands - he turned the ball over on 3.3 occasions per game, translating to a 3.2 assist-to-turnover ratio. Oh, and the icing on the cake? He had a +16 plus/minus on the week, which was the third most impressive number in the association. Butler is flat out ballin'.

The typically rock-solid Spurs had a disastrous past week on the hardwood. Coming into Monday, they had a 5-4 record and seemed to be in decent shape in a crowded Western Conference. Since then, San Antonio lost all four of their games this week and have fallen towards the bottom of the standings.

The most concerning part about this four-game skid is just how weak their schedule was for Gregg Popovich and his unit. Three of the four teams - the Grizzlies, Magic, and Blazers - are all under .500 while the last opponent - the TWolves - are barely above it. Yet, San Antonio failed to capture a win and let opponents pour in points by the dozens. They finished the week with a bottom-four defense and the fifth-worst net rating in the league - something we are certainly not used to seeing from the Spurs over the past two decades.
Stock Up: Houston Rockets

I will admit, I've been a major skeptic of the new-look Houston Rockets. In fact, you might remember that they were already featured in the Stock Down portion of this column a few weeks ago. While I still have my reservations about their long-term potential, they have been on a tear lately after rattling off a seven-game win streak and maintaining a perfect 4-0 Week 4.

It starts, of course, with James Harden. The guard has been back in his bag, scoring the ball from virtually anywhere on the court to help his team's offense put up big numbers. In a shocking plot twist, however, it's actually the Rockets defense that has been leading to victories. On Wednesday, they held the high-powered Clippers offense to a season-low 93 points. Then on Saturday, Houston locked up Andrew Wiggins, Karl-Anthony Towns, and the sixth-highest scoring offense in the NBA, holding them to 10 points below their season average. By the end of the week, the Rockets were sitting fourth in defensive rating. Houston is trending up after a shaky start to the season.

Well, look where the Pistons find themselves yet again. Stuck in mediocrity for years, Detroit has tried to make moves to climb up the power rankings in the East. Despite an enticing roster of players, it seems that they're right back on track to another disappointing season.

Even with Blake Griffin returning recently, the Pistons have come up short in four straight. Similar to the Spurs, their defense hasn't been getting the job done - they finished the week near the bottom of the league in defensive rating through their three games. As Griffin becomes more removed from his injury, his presence should certainly aid the Pistons' playmaking ability. The defense will be harder to fix, though.

Look, I'm all for family dinners. But, there will be one family whose Thanksgiving dinner will be a bit awkward...

Rockets guard Austin Rivers, after playing for his dad Doc Rivers for many years on the Clippers, was up against his pop this week in a primetime matchup. As most people know, Doc has been known for arguing with refs and going a bit crazy if things don't go his way. When that started to happen against the Rockets, Doc's own son was throwing him under the bus:

Rivers was loving the moment, but admitted that it would make for an awkward Thanksgiving this year!

It's always a treat when someone dribbles or passes through the legs of a defender for a classic nutmeg. In Week 4, we got two of them...by the same player...in back-to-back games. Leave it to Trae Young to master the art of the nutmeg:

That might become his new signature move? I don't know, but I would be here for it.

We all remember the burner account craze that shook the league a few years ago. Kevin Durant was busted for running a fake Twitter account to chirp at his haters, while Sixers GM Bryan Colangelo had up to five accounts dedicated to criticizing his own players and coaching staff.

We have a new suspect in the latest NBA burner account case - Kentavious Caldwell-Pope. NBA Twitter has been investigating a very generic handle name on the social media site that only seems to ever tweet when they're sticking up for KCP:

Dead giveaway if you ask me! Safe to say that KCP has had enough of all the haters online.