The Boston Celtics held off a resilient Dallas Mavericks team 116-106 to extend their winning streak to eight games and remain alone atop the league standings. With no Gordon Hayward (hand) and Jayson Tatum having his worst offensive game ever, Boston was able to grind out a win thanks to 24 second half points from Kemba Walker and a second-straight double-double from Jaylen Brown (25p/11r). Luka Doncic did his best to keep the Mavs in the game (34 points, nine assists, six rebounds), but his efforts just weren't enough to get them over the hump. 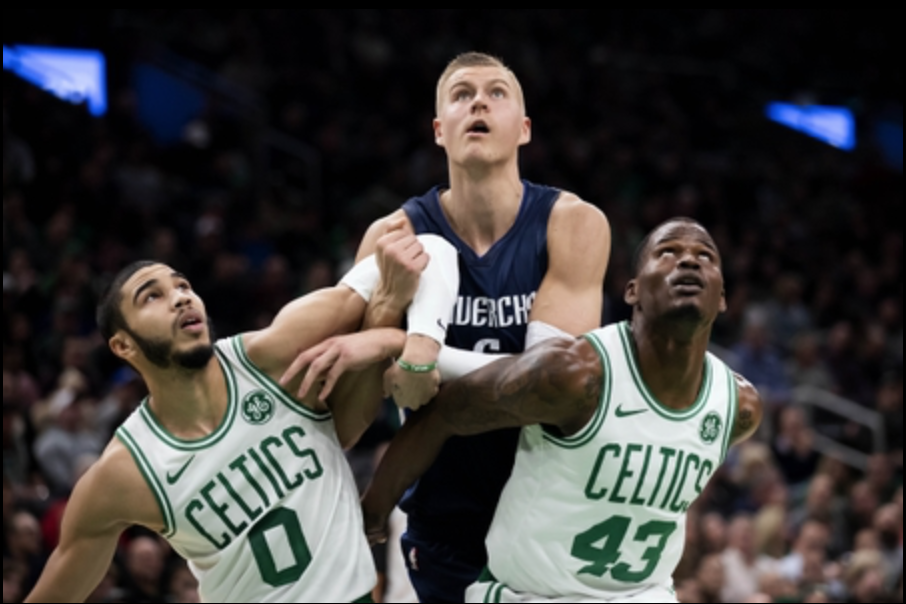 In the team's first game after losing Hayward to a fractured left hand, Brad Stevens inserted Swiss Army knife Marcus Smart into the starting group. And as has been the case all season, Smart took the challenge of guarding Dallas' best player in Doncic. The defense, with Smart doing his thing and Brown guarding Kristaps Porzingis, set the tone early on.

The #Celtics showing why they are top-5 in offensive and defensive rating. The #Mavericks are 0/4 shooting with a turnover. Boston 3/4 including lob dunk by Robert Williams just seconds after entering the game. C's up 6-0. #Mavs time-out with 9:45 to play in 1Q.

Despite not having Hayward, who had been the straw that stirred the drink early in most of these games, the Celtics looked excellent from the opening tip. Not only was the defense stifling the Mavs and forcing them into a number of contested shots, but the offense was humming. The ball was moving quickly and Boston was just working harder than Dallas.

Doncic, who has looked like an MVP candidate early this season, was able to score 10 points in the frame after getting off to a rough start, which kept the Mavs in the game. Despite shooting just 27 percent from the field and allowing the Celtics to shoot 50 percent, Dallas used the free throw line (7-8) to keep things close.

Celtics hold Mavs to 27.3 percent shooting in the first quarter, but lead by just four.

A lot of Hayward's value came in his ability to run the second unit, and we saw that manifest itself in some sloppy offensive play to start the second quarter. It didn't help that Walker was on the bench and Tatum was having a very hard start on the offensive end. But the bench was able to give the team a nice boost, something that has not been the case in recent games. Brad Wannamaker and Javonte Green combined for 15 points in the first half, and a majority of those points came midway through the second quarter to help the C's extend their lead. With Hayward out for six weeks after surgery, these bench/late rotation players are going to have to step up in a big way.

Javonte Green making corner 3s would be a big help for this offense with Hayward out.

Although the first half was both exciting and entertaining, Dallas was able to stick around and capitalize on eight Boston turnovers to close the gap heading into the halftime break. The Celtics severely outplayed the Mavs, but Doncic and Co. were able to stay within striking distance by grifting fouls and scoring off of those turnovers.

After the Mavericks scored the first three points of the game, the Celtics went on 15-0 run to open up a 12-point lead with just over seven minutes to play in the third. Brown continued his hot start into the third quarter, scoring seven of the 15 points during Boston's dominant stretch. When healthy, Brown has been an absolute force, and much more confident and composed than previous seasons.

Jaylen Brown has been really good to start this season.

Just as you thought the Celtics had opened up a solid lead, Doncic put on his superstar hat and scored eight quick points, including two DEEP threes, to cut the lead down to just five. But as if to say, "Not in my house young buck," Walker answered back with eight quick points of his own, including two contested threes. Walker finished the quarter with 14 points, and the Celtics clung to a 5-point lead heading into the final frame.

The Mavs opened up the fourth on a 5-2 run, and forced the Celtics into the penalty with just over nine minutes to play. Dallas used the free throw line to keep things close in the first half, and the second half was no different. Tatum continued his terrible offensive night, and the second unit minus Brown and Walker was struggling on both ends of the floor. A Dwight Powell dunk tied the game 86-86, and the Celtics found themselves with just under eight minutes left to right the ship and continue their winning streak.

#Celtics start out 3Q 1-for-8 and game is now tied at 86. Doncic been on the bench the whole time.

After trading buckets and leads for a few minutes, a free throw and a long three from Walker gave the Celtics a 2-point lead. After Doncic went 1-of-2 from the free throw line, Walker found Daniel Theis on a no-look pass who got Doncic in the air on a pump fake and took a blow to the head that resulted in a Flagrant foul 1. Theis hit one free throw, and Walker crossed Max Kleber out of his shoes to bury a long three right in front of the Dallas bench. A 1-point lead went to five following the flagrant foul call. After one Mavs free throw, Walker pulled up on the right side and splashed his eighth three of the game, a season high, to really blow things open.

A Smart three-point play and a bomb from downtown stretched the Boston lead out to 12 with under three minutes left to play, and the Mavs just didn't have enough left in the tank to make things interesting again. The Celtics held on and collected their eighth straight win.

Boston will be back in action on Wednesday night when they host the Washington Wizards.