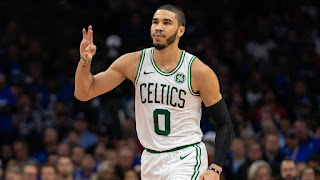 Jayson Tatum broke the tie in the final seconds of the second meeting of the year with the New York Knicks to win it 104-102 and take Boston to 4-1 on the season.

The storyline early at TD Garden was the ability of the Knicks to compete in a back-and-forth via timely shooting at a stat sheet display of rebounding, crushing the Celtics throughout the game in the offensive rebound category. A team that not many thought could put up a serious effort ended up battling all night.

Old friend Marcus Morris played a big part in the attempt to play spoiler for visiting Knicks, leading them in scoring with 29 points, helping New York stay in the game late in the fourth quarter. The former Celtic was clearly a focus coming into the game; “Mook” received applause from the TD Garden fans during introductions and even answered questions prior to the game about the Tacko Fall craze that hit MSG in the last meeting between these teams.


The third quarter featured strong play from new leader Kemba Walker and Gordon Hayward, who continued his strong play, making one good decision after another. Walker and Hayward combined for 19 of the 26 Celtics points in the third quarter. Hayward led the team with 9 rebounds.

The Celtics, in the end, were just too much for the lackluster Knicks as Kemba Walker finished with 33 points (23 of which came in the second half) and led the free throw barrage that proved vital for the Celtics. Kemba also drew attention with several hustle plays including rebounds in traffic to steal some possessions for the Cs in crunch time. The Celtics finished 27/29 from the free throw line (14/14 from Kemba), proving vital over the Knicks' 14/21 shooting from the line. Walker now has 131 points through his first 5 games in Celtic green and in the process, joined The Truth in a little piece of Boston history.


The end of regulation featured a thriller to cap off a wild night. After Morris tied up the score with a huge three on a kickout following yet another offensive rebound from the Knicks, Brad Stevens used a timeout to set up a play with 4.7 seconds left in the game, which was plenty for 21-year-old Jayson Tatum. In a tie game, the final seconds of the game featured play that looked very similar to an attempt in Orlando last year with Kyrie in the backcourt.


With all eyes on Kemba who was set up in the backcourt perhaps ready to take charge with a full head of steam, it ended up being as simple as inbounding the ball into the hands of Tatum, who faded away for the game-winning jump shot, leaving 1 second on the clock for the Knicks, who couldn’t get a shot off in time. Tatum finished the night with 24 points on 9/17 FG shooting, including the ice-cold game winner over 2019 third overall draft pick RJ Barrett.

The Celtics now head to Cleveland to face another subpar team and are about to play eight of their next ten games on the road.