Recap: Celtics fall 112-107 to Dinwiddie and the shooting Nets 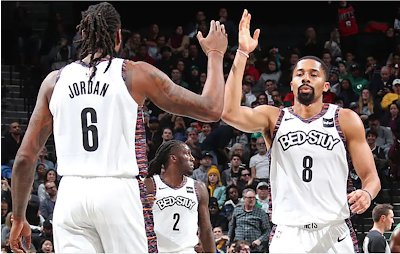 Spencer Dinwiddie and the Brooklyn Nets use hot shooting coupled with big men to down the Boston Celtics 112-107 in a noontime matchup.


Less than two days after a Kyrie-less Brooklyn Nets came into town, the two Eastern Conference teams switched courts for a post-Thanksgiving matinee matchup. Despite the Celtics coming out on top behind Kemba’s return, the first defense from the Celtics was marred by an inability to stop the deep ball. After giving up a season-high 21 threes to the shooters in black and white, Brooklyn came out of the gates today with exactly what Brad Stevens had feared: a quick start on the offensive end, scoring most of their first quarter points from three or the paint.


Brad Stevens says, “On a noon tip, we better be ready to go from the start.” He said that there wasn’t much time for either team to adjust with the holiday yesterday, and while heading into the second matchup with each other in a day and a half.


On the Brooklyn side, while Kyrie Irving was still out with a shoulder injury and an Instagram hangover, all-star DeAndre Jordan was available off the bench, giving the Celtics a little more to think about on the boards and in the paint. He finished the game with 23 solid minutes. Irving was also present and available off the bench to clap for a still-strong Nets lineup and his fans were available to make the highlight reel in their own way.


The Celtics used a couple of big runs to do what they have been known for this season: staying in the game with clutch shots. They were led by NBA Skills Challenge champion Jayson Tatum, who led all scorers with 18 points in the first half. The Celtics also found themselves impact play off the bench with ten men in green scoring points in the first half. The clutch play led the Celtics into the locker room at halftime surprisingly down by only 3 points, despite Brooklyn shooting 11/25 (44%) from 3, out-rebounding the Celtics 26-21, and scoring off 18 assists, as opposed to the Celtics' 10.


The man is on 🔥🔥@jaytatum0 has 18 points at the half. pic.twitter.com/plId18bDgl


The third quarter was tattooed by another Skills Challenge champion, Spencer Dinwiddie, who had no issues shooting the ball from deep and propelling the Nets to a double-digit advantage. Dinwiddie had a 27-point/10-assist performance before the end of the third quarter. However, the Celtics, yet again, responded with a run, led by fastbreaks and strong offensive performances from Brad Wanamaker and Robert Williams III. Chipping away at a deficit has been no stranger to the deep 2019 Celtics; they entered the final quarter down 6.


Brad Stevens credits Rob Williams for bouncing back after a tough first half today. He said Williams and the second unit gave us a chance tonight.


The fourth quarter saw a big-time entrance from “Brick Wall Semi” but Brooklyn seemingly never ran out of a response, either in the form of possession-saving wild shots or transition threes. Marcus Smart, Kemba Walker, and Jayson Tatum did all they could to stay in the fight with hustle and have a chance till the final seconds, but the Nets just proved to be too much and capped off the first NBA game of the day with an emphatic Jarrett Allen dunk to close out the affair.

The Celtics drop to 8-2 against Eastern Conference opponents and will need the Toronto Raptors to lose tonight against the Orlando Magic to hold second place in the East. The Celtics make the short drive to Madison Square Garden for another day-time game, this time on Sunday against the conference-worst New York Knicks, where they look to regain momentum before heading back home.