The Boston Celtics beat the Washington Wizards 140-133 in their most explosive offensive game of the season. The five starters combined to score 100 points, paced by Jaylen Brown (22), Jayson Tatum (23), and Kemba Walker (25). Carsen Edwards also added 18 points off the bench. Bradley Beal lead all scorers with 44 points and Rui Hachimura added 21. Things got a bit hairy down the stretch, but a win is a win. 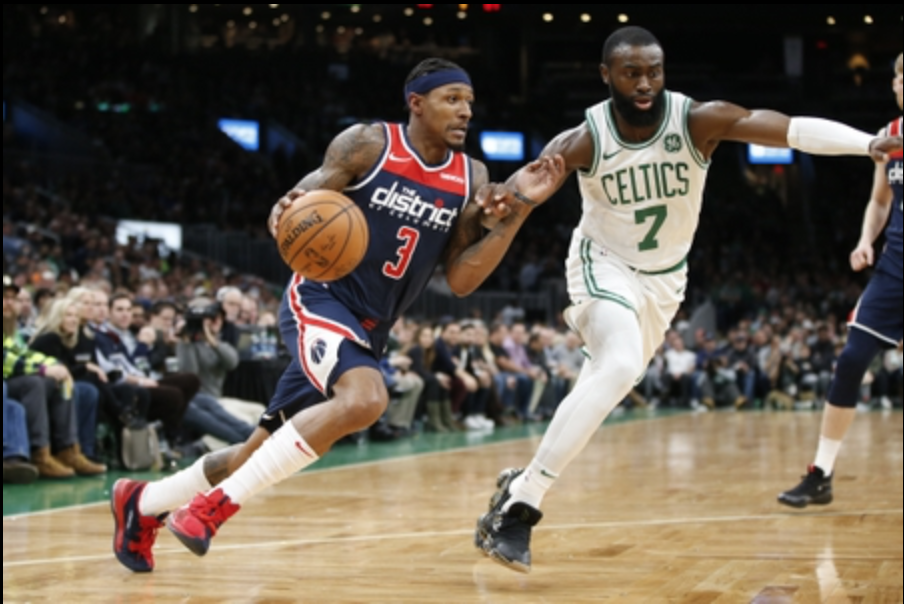 Prior to tip off, the Celtics made a change to the starting lineup. Enes Kanter slide into the opening group with Daniel Theis and Robert Williams out due to injury.

And Kanter made his presence known right off the bat. Kanter, defensive shortcomings aside, is a beast on the boards, and knows how to finish around the rim. Theis and Williams both bring different skill sets to team, but Kanter adds a big-time inside scorer.

After a dismal and potentially all-time bad shooting performance against Dallas on Monday, Tatum wasted no time getting in the score sheet against Washington. Tatum made five of his first nine shots and continued to to drive to the rim regardless of the outcome. With Tatum back to his usual self, old friend Isaiah Thomas got the start for Washington and, obviously, knocked down his first shot back in the building where he became a star.

Much-improved Jayson Tatum tonight for the #Celtics. Has 11 pts on 5/9 shooting. The Wizards' Bradley Beal and fellow St. Louis native, is leading the way for Washington with 12 pts at the end of the first quarter with the score tied at 34.

Apparently Thomas had told the rest of the Wizards about the secrets of playing in Boston, because the team got off to a blistering start from the field. Washington finished the first quarter shooting 56 percent from the field and gave the C's a real challenge on the defensive end. Boston wasn't too far off (48 percent), but used five offensive rebounds to get some extra possessions and add some second-chance points.

The Celtics were able to get a number of good looks during the first quarter when the Wizards went into a zone defense. Those open looks were going to start falling, but given that a few were bouncing out, the game was tied at 34-34 heading into the second.

The Wizards jumped out to a 5-point lead early in the second quarter on a few fantom foul calls, but a make-shift reserve unit was able to claw back into the game thanks to some timely buckets from Edwards and Brad Wannamaker. Grant Williams also showed his value as a small-ball five man with his high basketball IQ and ability to battle inside although being at a big height disadvantage.

Beal, who has been tasked with carrying the Washington squad during the absence of John Wall, was doing all that he could in the first half. Beal had 24 points on 9-14 shooting. Beal is an all-NBA talent and it was all on display early in the game.

Marcus Smart, who has been the heartbeat of this Celtics team all season, has officially added an outside shot to his trademark rugged defense. Back-to-back threes late in the second gave Boston the lead, and his stroke has never looked better. Smart/Walker/Tatum strung together a few buckets and helped the Celtics take a 68-66 lead into the halftime break.

We got a close one here with the #Celtics up 68-66 over the #Wizards. Tatum leads Boston with 15 pts, while Kemba Walker and Marcus Smart each have 11 pts. Bradley Beal leads everyone with 24 pts and ex-Celtic/still fan favorite Isaiah Thomas has 10 pts for the Wizards.

Neither team had a particularly good defensive first half, with the Celtics (50 percent) and Wizards (49 percent) both getting easy looks and not facing much adversity when getting to the rim. The C's were missing the likes of Theis and Williams on the inside challenging shots.

Three reasons why the #Celtics are in a tighter-than-expected battle with the #Wizards.
* Fast break points - Washington has a 14-6 edge
*Points in the Paint - Washington has 30-24 edge
*Bench points - Boston leads 20-19. The C's second unit key to Boston leading at the half.

After a bit of a slow start and only four points in the first half, Brown came out of the break on a mission. He scored eight points in the first three minutes of the third quarter, and did it in a multitude of ways. He jumped a passing lane and took the ball coast-to-coast for a layup on one possession, and then knocked down back-to-back jumpers to open up a 9-point lead for Boston.

Walker and Smart added two long threes to go along with Brown's hot shooting, and the C's lead ballooned to 11 points, their first double-digit lead of the game. But, with the lead up to 13, Washington went on a quick 9-0 run to cut the lead back to just four. The Celtics were able to push the lead back out to 10 late in the quarter, but the Wizards made enough shots to keep things close. Boston took a 102-96 advantage into the fourth quarter.

Davis Bertans opened the fourth with a three for Washington, but Edwards and Tatum combined for the next 10 straight points, opening up the lead to 13 points once again. Edwards has been up and down this season, but when his shot has been falling, he has provided a nice offensive spark off the bench.

With Washington down double digits, Beal put on his do-it-yourself hat and continued to dominate. Beal sandwiched five points around a Mo Wagner free throw and dragged the Wizards back within seven points. As much as I grew to hate Beal from the days of the Celtics-Wizards rivalry, it really does suck watching such a talented player waste away on such a terrible franchise.

Nonetheless, the Celtics were just too deep and too talented for the Wizards to keep pace. Edwards and Tatum expanded the lead with Brown and Walker on the bench, and Boston was able to survive a late 12-0 Washington run to secure their ninth straight win.

The Celtics will head west for a six game West Coast road trip, starting with the reeling Golden State Warriors on Friday night.