The Boston Celtics held off a feisty Cleveland Cavaliers team 119-113 to increase their winning streak to five games. The Celtics shot the ball well the entire game, and were able to cause enough chaos on the defensive end to disrupt the Cavs' rhythm. Gordon Hayward exploded for 39 points on 17-20 shooting, while Kemba Walker added 25 points and Jayson Tatum chipped in 18 points. Colin Sexton paced the Cavaliers with 21 points, and Tristan Thompson added 19 points and 13 rebounds. 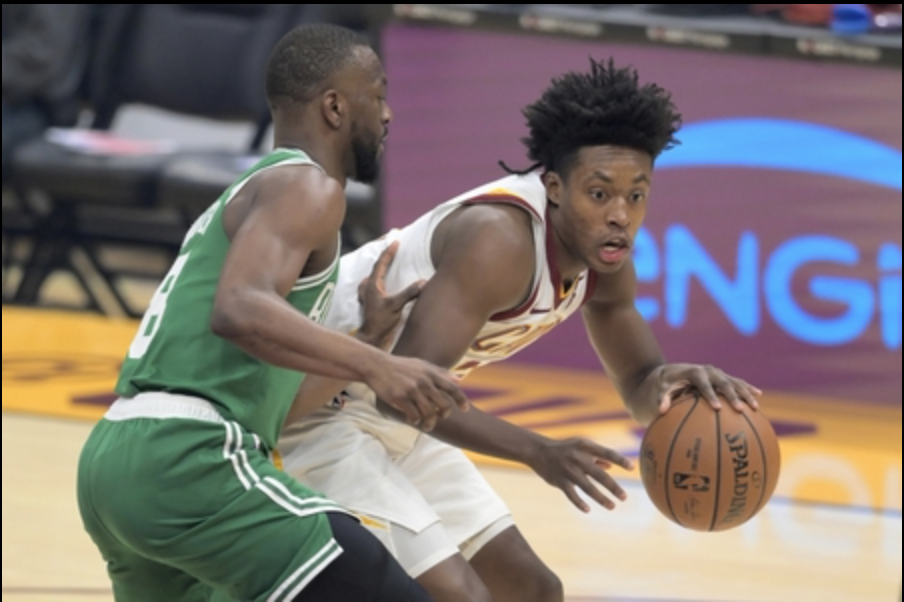 With Jaylen Brown (illness) missing his third straight game, Marcus Smart once again stepped into the starting lineup at the second guard spot. And as if he hasn't done enough for this team over the past few games, Smart started off the game guarding Kevin Love.

After the Cavs scored the first points of the game, the Celtics went on a 9-0 over the next five minutes to jump out to an early lead. While Smart was able to hold his own against Love in the post, Cleveland's decision to have Thompson guard Tatum was not working out. Tatum was able to get any shot he wanted with the larger Thompson not able to keep up with his quickness. The starting unit as a whole was super efficient and the offense looked like it was humming early on.

This Walker/Smart/Hayward/Tatum/Theis lineup had a +14 net rating coming into tonight and that should be going up again after this one.

With Tatum on the bench midway through the first, Hayward took over the offensive production. Hayward's midrange game has been sensational this season, and tonight was no different. He looked sharp and decisive on his drives to the basket, and left defenders running by him as he stopped on a dime for a pull-up jumper. Hayward scored 16 points on 7-7 shooting in his first 12 minutes.

The Celtics got a bit lazy on the defensive end early in the second, and let the Cavs get some easy looks at the bucket. Tatum and Smart combined for nine points to keep the lead at eight midway through the quarter, but Boston looked like they had taken their foot off the gas a bit after a fantastic first frame.

Sexton made his mark in the second quarter, scoring five quick points to help the Cavs cut the lead down to six. Boston hasn't been getting the bench production that they have needed in recent games, and tonight was no different early on. A combined five points from Carsen Edwards and Brad Wannamaker was all the C's could muster in the first half, and the offense slowed when the starters went to the bench. With the momentum fading and Sexton clicking, the Cavs were able to draw within two points late in the half.

With the lead as low as it had been since early in the game, Hayward continued to assert his dominance and added six straight points to extend the lead back out to nine heading into the halftime break.

Gordon Hayward finishes the first half with 22 points on 9-for-9 shooting.

If the Celtics are going to make some noise this season, this is the Hayward they are going to need. Hayward's greatest skill is his playmaking ability, and his ability to run the offense and allow Kemba to play off the ball is essential. But when he can get downhill and score efficiently, this team, and all the other weapons it has, is very difficult to stop.

Despite the hot shooting of Sexton in the second quarter, Boston held the Cavs to just 39.6 percent shooting from the field. The Celtics, on the other hand, shot a blistering 54.5 percent, thanks in large part to Hayward's hot start (9-9 from the field).

Tatum set the tone for the second half on the first possession, when he jumped the passing lane at the top of the arc and took the ball in for a dunk on the other side. The Celtics got a bit sloppy late in the first half, but got back after it on the defensive end as the third quarter opened up.

Boston held the Cavs to just nine points through the first six minutes of the second half, but couldn't score enough to pull away and extend the lead. With Hayward getting a breather early in the third, Brad Stevens broke out a Kemba-Tatum pick-n-roll, which paid dividends right away.

Celtics running some Kemba-Tatum pick and rolls here. Got a wide open Kemba 3 on the first possession.

Cleveland cut the lead down to four late in the third quarter thanks to some sharp shooting from beyond the arc from Larry Nance Jr. and Brandon Knight. Stevens went with an all-bench plus Hayward lineup to close the third quarter, and Cleveland was able to claw themselves back into the game.

With the Boston lead hovering around six or eight much of the fourth, Edwards channeled some of his preseason magic and gave the Celtics a big boost when they needed it. He hit back-to-back threes and extended the Boston lead back to double digits 102-90. Edwards has struggled with his shot early in the season, but 13 points on efficient shooting (5-6 from the floor, 3-4 from three) was just what the doctor ordered.

Carsen Edwards saw the ball go in a couple times and that was enough to get him started.

With the lead at eight and the bench (Edwards and Wannamaker) having done their job of maintaining the lead, the starters took over for the final stretch. Daniel Theis was a force on the defensive glass, racking up five blocks and contesting almost everything at the rim.

Back-to-back threes from Hayward and Walker extended the lead to double digits, but the Cavs remained resilient, and kept punching back at the C's.

"Cardiac Kemba" made an appearance with a late shot clock three to push the lead to six, but Sexton answered right back with a corner three of his own. After playing the entire game feeling like the Boston lead should have been a lot bigger, Cleveland was able to make a game of it down the stretch. After Walker won a jump ball against Sexton, Hayward secured a huge offensive rebound and laid the ball in to open the lead up to five with just 21 seconds left to play. A lazy inbounds pass gave Walker two free throws, the Celtics were able to hold off the Cavs and secure a 119-113 win.