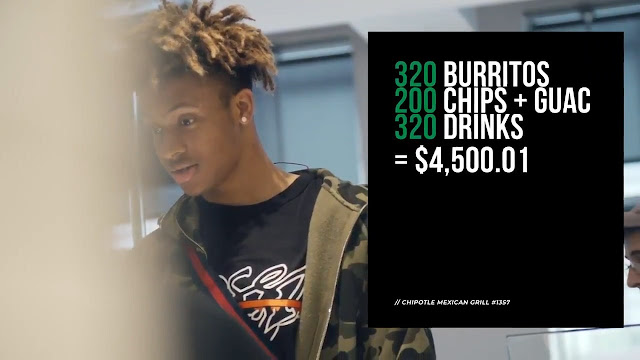 Boston Celtics rookie Romeo Langford has been on the receiving end of a series of pranks from veteran Marcus Smart, which began earlier this month when Smart interrupted Langford's media day interview:

The most recent hazing episode was posted to Twitter earlier today. Langford was sent into shock when he went to Chipotle to grab lunch and was told by the restaurant chain's employees that Marcus Smart had placed a $4500 order for the whole team and had instructed them that Romeo would be footing the bill. Watch the epic prank in the video below:

🤦🏾‍♂️🤦🏾‍♂️😂 I guess this is what being a rookie is like lol I thought I was about to have to pay $4500 for some Chipotle… @smart_MS3 @ChipotleTweets pic.twitter.com/Vs1FmwFJR8

Perhaps this is all a part of what Semi Ojeleye referred to as the Celtics veterans "trying to help the rookies feel like family."

Semi Ojeleye tells me that he and his fellow Celtics vets are trying to help the rookies feel like family right off the bat.

“We’re just making them feel welcome. Just trying to include them in everything, invite them to everything."

The team definitely seems to be more lighthearted this season than last, and hopefully keeping things fun will allow the Celtics' team chemistry to blossom.